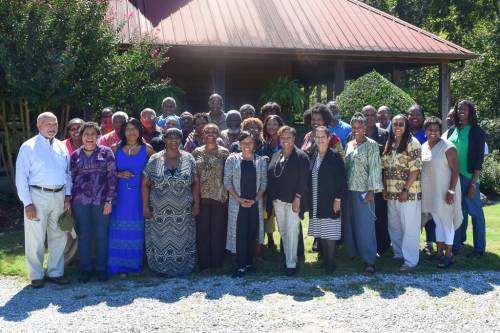 The leaders came together in an African American historic and spiritual environment to discuss issues impacting the changing landscape of the African American Presbyterian Church, consulting with one another to gain vision for their ministries in the emerging church.

The Rev. Dr. Rhashell Hunter, director of Racial Ethnic & Women’s Ministries, opened the first session of the three-day event by asking the group, “When was the last time we were together? When was the last time we had a chance to talk together about our churches? When did we have a chance to be with others like us, who are doing the same things…to talk together, network and support each other?”

“The landscape of the African American Presbyterian Church is changing and has changed”, said Hunter. “Some of this is very positive. It was a historic General Assembly. At G.A. in Portland, we elected our first African American Stated Clerk, the Rev. Dr. J. Herbert Nelson, II. We also made history by electing two women as co-moderators, the first all-woman moderatorial ticket, the Rev. Denise Anderson and the Rev. Jan Edmiston.” Nelson and Anderson attended the Consultation.

Hunter went on to point out other positive action the PC(USA) has taken to address matters of race and justice. She noted that 30 years after its birth in South Africa during the battle against apartheid, the PC(USA) voted to include the Belhar Confession in the Book of Confessions.

Additionally, she noted that the revised churchwide anti-racism policy, “Facing Racism: A Vision of the Intercultural Community” was approved by the 222nd GA (2016) and that an action to address the “Worsening Plight of the African American Male” was passed, calling for action in five specified cities: Baltimore, Charlotte, Cleveland, New York and Pittsburgh.

The ministry account fund, “Freedom Rising!” has been started in honor of the Rev. Eugene “Freedom” Blackwell, who passed away shortly after the 2016 General Assembly. Blackwell was a pastor in Pittsburgh, who was an overture advocate to the Assembly in Portland. Congregations are encouraged to forward the locally retained 25 percent of their Peace & Global Witness Offering to the Presbyterian Foundation. The Foundation will disseminate the funds to the five presbyteries for outreach programs directed toward African American males.

The Consultation provided an opportunity for attendees to recognize the many reasons to gather as African American Presbyterians. Culture—the need to gather with others who are of the same racial and ethnic group, who share a common identity, which stems from a common history and experiencing God in the midst of struggle and oppression—was one key reason for the gathering. Another reason was to deal with the effects of racism.

“Unfortunately, racism is still an evil in our society and persons of certain racial ethnic groups regularly experience prejudice, discrimination, incarceration, unequal education, disparities in health care, and devaluing of women’s bodies and of black bodies,” Hunter said. “We’re meeting to work toward equipping our congregations and leaders, inspiring our pastors and elders, empowering our young adults and youth, and connecting with one another to envision the new landscape of the African American Presbyterian Church.

“African American Presbyterians have a long tradition of bonding together in a community that has been a source of survival, information and emotional support. That’s why we are here.”