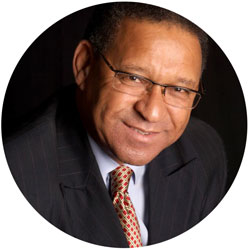 “I think that Zacchaeus chose that tree not to be in a place where he could see Jesus because of his short stature, but because it was a safe place for him amongst that hostile crowd,” Boesak speculated. “Rather than standing among them and being recognized for what he was, and being beaten up, he found a hiding place in that tree. And that’s why Jesus had to stop and look up, and call him down from that tree, in order to do for Zacchaeus what happened in the story next.”

Zacchaeus acknowledges his personal complicity, experiences remorse, recognizes that those he has harmed have a right to justice through restitution and reparation, Boesak said. Offering justice is “a way of asking forgiveness.” It restores Zacchaeus’ broken relationship with God and others, especially those he has hurt through “arrogance, greed, violence, lust for power and domination.” After Zacchaeus takes action to set things right through tangible acts of reconciliation, not only is he released from the sins of systemic oppression and exploitation, but his whole family and generations to come are transformed as he takes hold of his new identity as “a son of Abraham.” 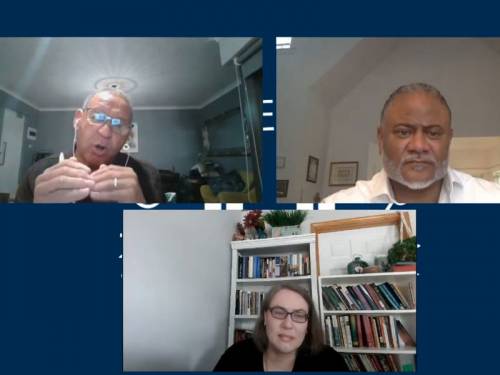 Boesak, a South African civil rights activist, theologian and professor of Black Theology and Ethics at Pretoria University, worked alongside Nelson Mandela, who became South Africa’s first democratically elected president, and Archbishop Desmond Tutu to end apartheid in South Africa. Boesak co-wrote the Confession of Belhar, which he drafted in 1982. It is the first confession from the global south to be adopted by the Presbyterian Church (U.S.A.), and added to the Book of Confessions by the 222nd General Assembly (2016).

“Reconciliation not only changes the way we feel, it transforms us and our identities as agents of God’s love, God’s justice and God’s reconciliation,” Boesak said. “For us, it means that white South Africans, instead of remaining children of colonialists and imperialists and the bringers of apartheid, can become brothers and sisters and children of the same soil.”

For Christians, Boesak said, “Reconciliation is not an ‘option among other options,’ where we weigh the risks, consider the probabilities for success or failure; then, with cautious optimism, feel free to choose the path more feasible and more manageable.” Instead, reconciliation is an “obligation,” “a calling,” “a ministry entrusted to us by God in Jesus Christ.”

The question, he said, then becomes: “How have we fulfilled this obligation?”

“Reconciliation, reparation, restoration and transformation have something to do with what the Rev. Dr. Martin Luther King talked about so often, in which the Southern Christian Leadership Conference and the brave masses enacted so magnificently in the streets of America in the 1950s and 1960s, namely, to save the soul of the nation. Politically, socially and spiritually — that is the ultimate act of reconciliation because it is redemption.”

“That is how I see your work in the United States, as I see ours. It is a work of redemption,” Boesak said. “Redeeming America after 500 years of invasion, land theft, genocide, epistemicide, enslavement, discrimination and exclusion. After over 4,700 lynchings and after the modern-day lynchings of the Travon Martins, the Sandra Blands, the Tamir Rices, the Breonna Taylors, the Michael Browns, the George Floyds and all the names since George Floyd — too numerous to mention already. After the almost daily crucifixion that womanist theologian Kelly Brown Douglas calls ‘the crucified class of today.’

“Like South Africa, America, unfortunately, instead of offering genuine repentance and remorse, instead of coming with contrition to ask for forgiveness and to make amends with the undoing of justice and the doing of justice. Instead of breaking down the walls of separation and the fortresses of white supremacy, racism, homophobia, transphobia and gender injustice and setting right the harm done by new liberal capitalist exploitation, America is looking for cheap reconciliation — avoiding the costly path of reparation and restoration, hoping that the crumbs falling from the empire’s table will satisfy the hunger and thirst of these masses for justice and righteousness.”

On Wednesday, May 26, at noon (EDT), Boesak will present another webinar titled “Wrestling with Race: Stories for American Anti-Racists from the South African Struggle.” This webinar is primarily for clergy but open to all. Register here to attend the live presentation, which will be archived on the Union Presbyterian Seminary YouTube channel.