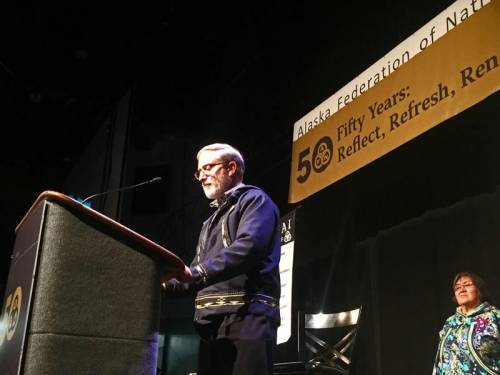 Curt Karns, executive presbyter of the Presbytery of Yukon, reads an apology before hundreds gathered October 22, 2016 for the Alaska Federation of Natives Convention in Fairbanks, Alaska. (Photo by Emily Schwing / Northwest News Network)

LOUISVILLE – Healing has begun between Native Alaskan groups and the Presbyterian church following an apology issued by the Presbytery of Yukon at the meeting of the Alaska Federation of Natives (AFN) last Saturday. Native representatives and the presbytery both acknowledge this significant gesture is the start of a long process to address the abuses of the past century, especially as it relates to the treatment of Native Alaskan children at church-affiliated boarding schools.

The apology comes on the heels of two overtures passed by the 222nd General Assembly (2016) of the Presbyterian Church (U.S.A.) this summer. The first was a repudiation of the Doctrine of Discovery [11-17], which asserted Native peoples did not have sovereignty over their land and gave western colonizers the right of dominion. The second was an explicit call for entities of the PC(USA) to make direct apologies for its role in personal and cultural abuses against Native American groups [11-08]. The Presbytery of Yukon was the first body to formally issue such an apology.

“The overall feeling from the Alaska Federation of Natives was, ‘Wow, this is great,’” says Roy Nageak, Sr., a Native Alaskan assembly member of the North Slope Borough and Ruling Elder at Utqiagvik Presbyterian Church in Barrow, which was established in 1898 and is the largest Native-majority church in Alaska. “This has never been done before for the Alaskan people who are more remote and, like me, were sent to boarding schools under the Bureau of Indian Affairs.”

Though Nageak’s uncle was willing to pay his tuition and expenses to attend the Presbyterian-founded Sheldon Jackson School, he wanted to stay with his friends. “The Bureau of Indian Affairs sent us all the way to a place near Salem, Oregon, called Chemawa Indian School.” His older siblings did attend Sheldon Jackson High School and College and became Presbyterian ministers after studying at Dubuque Seminary.

Perhaps no Alaskan missionary is as well known as Sheldon Jackson. The Princeton Seminary educated Presbyterian minister had established churches in Colorado before arriving in Alaska in 1877. His complicated relationship with Native Alaskans included a dogged insistence on preserving Eskimo cultures and artifacts, and going to great lengths to ensure the economic livelihood of Native Alaskans as seal and whale populations disappeared due to over harvesting.

Yet Jackson also prohibited the use of Native languages in schools he established; forbade Native religious ceremonies around birth, marriage and death; and even cut down totem poles, believing them to be objects of worship rather than visual histories. Among Native Alaskans, Jackson is simultaneously lauded and vilified.

For Native Alaskans, no memory of this westernizing and colonizing period is as vivid, or as painful, as the establishment of Native boarding schools. Again, in the complex history of the relationship between missionaries and Native Alaskans, many children in remote villages would not have been educated without the founding of these schools. But the abuses endured by some children at these schools and the damage inflicted by the separation of families will long be remembered.

The apology is essential, Karns says, to help those who have internalized this generational trauma that is exhibited in some Native Alaskan communities in high rates of violence, substance abuse and suicide. “Part of the process is to validate that what they are feeling is real, and the apology is an essential part of this healing,” he says. “The gospel of Jesus Christ is always about healing whatever has been broken by sin and that’s why confession and repentance on our part is so important.”

Karns recalls that after his delivery of the apology, many representatives at the gathering came to him in tears thanking him for what the Presbyterians have done in Alaska. “But I’ve also had people who are really angry about the hurt,” he says.

“This also turns out to be a healing for the Presbyterian Church and for the greater society,” Karns says of listening to and reckoning with the expressed anger. “The air of superiority we were showing through that ethnocentric mindset also makes us less-than-adequate bearers of the gospel. Our own sin makes us less than we ought to be as full human beings under God.”

While no imminent plans are underway to conduct a Truth and Reconciliation process as was done in Canada between First Nations groups, the government and churches, Karns says he has had discussion with ecumenical partners to see what role they can play in the process the AFN is exploring.

“There were these kids, about six or seven years old, attending elementary school—forced to leave the bonding of their families,” she says of what she witnessed as a teenager at boarding school. “They were stripped from their families and shipped down to Wrangell [Institute Boarding School]. At the time I didn’t realize how much of an impact it had on my grandparents and parents, who said to me that I’d changed.”

Despite these hard memories of family bonds being broken, she says, “I would not be educated if I hadn’t gone. I would not have the skills of western society that allowed me to move forward. We gained a lot of leaders from our area to run the corporations and Native villages.

“From that perspective it’s good that we got an education and are able to lead our people,” she says. “Maybe for the last 40 years or so, the Presbyterians helped us reestablish our language. In Barrow, everyone went to the Presbyterian Church… it was a firm foundation. When I was young we had a Native lay pastor who taught us all these things and we were able to speak our language when we went to church.”

Olemaun also credits Presbyterians for the formation of the Arctic Slope Regional Corporation, which received its seed money from the Self Development of People program of the PC(USA) in 1971. It is now the largest locally owned and operated business in Alaska, with 12,000 Iñupiat Eskimo shareholders overseeing 10,000 employees engaged in energy production and resource development.

“[The grant] gave us a head start in establishing a Native business, so we’re thankful for these things,” she says, while acknowledging the pain still present among Native Alaskans as they work to rebuild their cultural heritage and family systems. “There needs to be some follow through on what action we need to take to further heal within our community, as people of the Alaskan tribes.”

The text of the apology, as presented by the 222nd General Assembly, and delivered to the Alaska Federation of Natives, is printed here:

We apologize for the pain and suffering that our church’s involvement in the Indian boarding school system has caused. We are aware of some of the damage that this cruel and ill-conceived system of assimilation has perpetrated on United States citizens of Native American ancestry. For this we are truly and most humbly sorry.

To those individuals who were physically, sexually, and emotionally abused as students of the Indian boarding schools in which the PC(USA)3 was involved, we offer you our most sincere apology. You did nothing wrong; you were and are the victims of evil acts that cannot under any circumstances be justified or excused.

We know that many within our church will still not understand why each of us must bear the scar, the blame for this horrendous period in U.S. history. But the truth is, we are the bearers of many blessings from our ancestors, and therefore, we must also bear their burdens.

Our burdens include dishonoring the depths of the struggles of Native American people and the richness of your gifts. Therefore, we confess to you that when our Presbyterian ancestors journeyed to this land within the last few centuries, you shared your Sacred Vision with us, to our Presbyterian ancestors, and to our country’s leaders; essentially none of us heard you.

In our zeal to tell you of the good news of Jesus Christ, our hearts and minds were closed to the value of your spirituality. We did not understand the full extent of the Gospel of Christ! We should have affirmed the commonality between your spirituality and our understanding that God’s sovereignty extends with length from East to West, with breadth from North to South, with depth throughout the Earth, and with height throughout the Sky and Heavens.

Even worse, we arrogantly thought that Western European culture and cultural expressions were necessary parts of the Gospel of Christ. We imposed our civilization as a condition for your accepting the Gospel. We tried to make you be like us and, in so doing, we helped to diminish the Sacred Vision that made you who you are. Thus, we demonstrated that we did not fully understand the Gospel we were trying to preach.

We know that apology is only a first step in the larger hope of repentance and reconciliation. We seek the guidance of relationships with your people within and beyond our church as we seek to identify and act on restorative practices and policies at the relational, communal, and national level.

We are in the midst of a long and painful journey as we reflect on the cries that we did not or would not hear, and how we have behaved as a church. As we travel this difficult road of repentance, reconciliation, and healing, we commit ourselves to work toward ensuring that we will never again use our power as a church to hurt others with our attitudes of racial and spiritual superiority.

We also seek your forgiveness and hope you will walk together with us in the Spirit of Christ and partner with us as equals as we participate in God’s redemption of the world so that our peoples may be blessed and God’s creation healed.

Finally, we pray that you will hear the sincerity of these words and that you will witness the living out of our apology in our actions in the future.