by Jim Nedelka | Special to the Presbyterian News Service 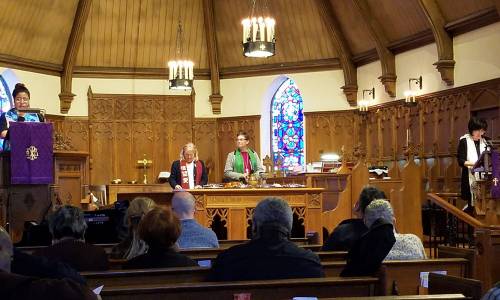 NEW YORK — On Saturday, March 7, the eve of International Women’s Day, the Presbytery of New York City celebrated this year’s theme, “An equal world is an enabled world,” in a unique way: the installation of Ruling Elder Frances Thom and Ruling Elder Terri Youn to their one-year terms as, respectively, moderator and moderator-elect. Present for this historic occasion in the sanctuary of Riverdale Presbyterian Church in The Bronx was the Rev. Cindy Kohlmann, Co-Moderator of the 223rd General Assembly.

The Rev. Chris Shelton, pastor of Broadway Presbyterian Church, concluded his one-year term as Moderator with the honor of leading the brief but historic ceremony. Along with the traditional denominational questions, two New York traditions were continued: the longstanding passing of the Moderator’s Cross and the relatively new transference of the Moderator’s Stole. 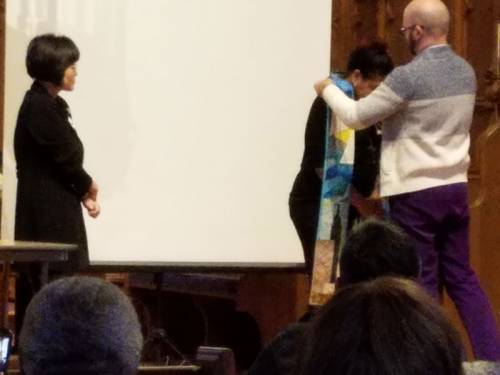 The Rev. Chris Shelton, pastor of Broadway Presbyterian Church, places a stole on Ruling Elder Frances Thom, the youngest moderator in the more than 300-year history of the Presbytery of New York City. Watching is the presbytery’s moderator-elect, Terri Youn. (Photo by Jim Nedelka)

During the Communion Prayer Thom, a Riverdale Presbyterian Church member since childhood, along with the Rev. Krystin Granberg, Riverdale’s interim pastor, and Youn, of Bedford Park Presbyterian Church, the first single woman of Korean heritage ordained as a ruling elder in that Bronx congregation, were joined in the chancel by Kohlmann to raise up the names of groundbreaking women, among them:

As this litany concluded, the names of the 13 women who have also served the Presbyterian Church (U.S.A.) as moderator or co-moderator (until recently termed “vice moderator”) since 1983’s reunification were lifted up in prayer.

When Kohlmann blessed the upcoming leadership of Thom and Youn, she provided a surprising tidbit of history: at age 28, Thom is the youngest moderator ever elected in the Presbytery of New York City’s history that reaches back to 1717.