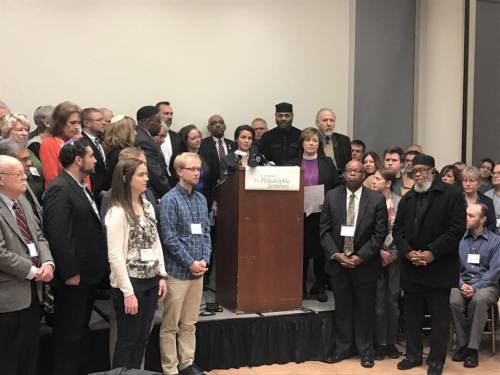 LOUISVILLE – Vandalism in two Jewish cemeteries in recent weeks has caused concern not only in the Jewish community but also among interfaith partners working to confront religious-based violence. Members of the Presbytery of Giddings-Lovejoy in St. Louis and the Presbytery of Philadelphia have come alongside Jewish partners to offer support.

Over Presidents’ Day weekend 170 headstones were toppled in Chesed Shel Emeth cemetery near St. Louis. The following weekend Philadelphia police discovered 100 headstones toppled in Mount Carmel cemetery. Additionally, over 100 bomb threats have been reported against Jewish Community Centers (JCC) nationwide since the beginning of 2017. The threats have come in bursts concentrated on Jan. 9, 18, 31 and Feb. 20. The most recent cluster of threats was called in Monday, Feb. 27, when 31 JCCs and schools were evacuated.

“The presbytery will continue to stand with our Jewish colleagues, offering compassion, peacemaking [and] reconciliation in such a fraught atmosphere,” said the Rev. Kevin Porter, stated clerk of the Presbytery of Philadelphia.

A meeting of the Interfaith Center of Greater Philadelphia was already scheduled Monday and the group took the opportunity to hold a press conference decrying the acts of violence. Porter and several Presbyterian pastors were in attendance.

“The message was that when this happens to any faith community, it happens to us all,” he said. “It’s such an affront to the dignity and the image of God in every human being to desecrate a gravesite. There wasn’t much of a need to nuance that message. This is something where we have to be strong, and be unified, against this happening to any of us.”

“This is a horrible act of hatred targeting the hallowed grounds of our Jewish sisters and brothers,” said the Rev. Greg Klimovitz, associate presbyter of the Presbytery of Philadelphia. “We must stand by them and ensure they sense our solidarity and commitment to work towards a better community whereby such hate is no longer present and all are valued regardless of their religious affiliation.” 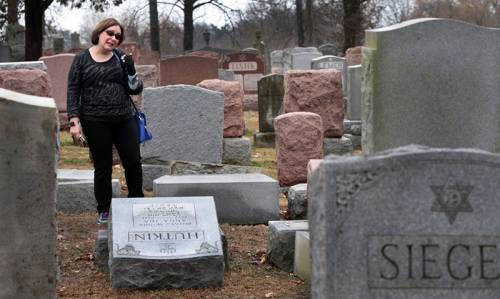 The Rev. Dr. Craig Howard, Giddings-Lovejoy transitional presbytery leader, said the ongoing racial and religious tension he’s discovered in his brief time in St. Louis is not particular to the city. “What is obvious is that there’s a tension,” he said, referring to threats of violence against the Jewish and Muslim communities in Milwaukee, where he most recently served.

“My plan is to find interfaith activity and connect with that,” he said, noting the presbytery’s engagement in Dismantling Racism discussions and Sacred Conversations on Race. “This is a presbytery that has the infrastructure to have a voice.”

The incidents bear striking similarities to patterns of historic violence against the Jewish community including the pogroms of Eastern Europe in the late 19th and early 20th centuries, which targeted Jewish cemeteries, businesses and schools as a means of attacking Jewish culture.

The Presbyterian Church (U.S.A.) has a long tradition of interfaith dialog and formalized its solidarity with and commitment to continued conversation with interfaith partners in 2014.

“The Interreligious Stance of the Presbyterian Church approved by the 221st General Assembly (2014) reaffirms the PC(USA) commitment to engage constructively with persons of every faith tradition,” said the Rev. Robina Winbush, Associate Stated Clerk and director of ecumenical relations for the PC(USA). “We understand this to be both a biblical and confessional mandate — to love our neighbors as ourselves — and that we are called to stand against any form of injustice. The desecration of cemeteries and the threatening of communities because of their faith is a violation of the basic core tenets of our faith. We condemn the rise of anti-Semitism and anti-Muslim sentiments as well as other actions of bigotry against people because of their faith.”

As of press time, no arrests have been made in either cemetery vandalism case. Rewards of at least $50,000 are being offered in each city for information leading to an arrest and conviction.