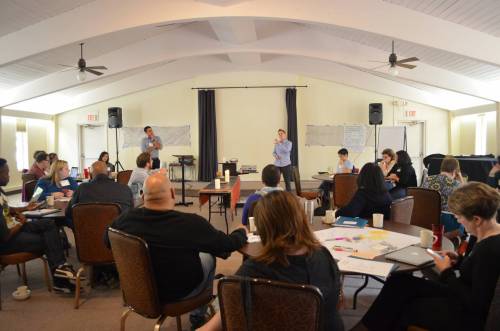 In response to the National Racial Ethnic Ministries Task Force’s referral at the 221st General Assembly (2014), 40 participants selected from throughout the Presbyterian Church (U.S.A.) gathered at Stony Point Conference Center in New York for a conference on race, ethnicity, racism and ethnocentricity.

Referral Item 09-14, Recommendation 3, directed Moderator Heath Rada to appoint a planning team of 10 people to plan a churchwide conversation on race and racism. The attendees were selected for their dedication and work around the issues of race and racism. According to the referral, the recommendation for the churchwide conference was one of several intended “for the church to intentionally and honestly begin an ongoing effort to a path of reconciliation”.

Working in consultation with racial ethnic congregational leadership, racial ethnic caucus leadership, Advocacy Committee for Racial Ethnic Concerns (ACREC), Presbytery and synod leadership, General Assembly Committee on Representation (GACOR), Representatives from the Office of the General Assembly (OGA) and the Presbyterian Mission Agency (PMA), the conference was developed to help participants, and eventually the whole church, learn, discuss and reflect on these issues, and ultimately issue a call to action. 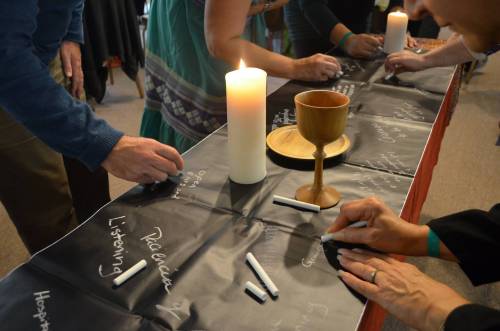 Prayers and hopes are written during communion at the conference on race, ethnicity, racism and ethnocentricity held at Stony Point Conference Center in New York. —Photo provided

“We cannot do the work of becoming God’s intercultural community without facing the sin of racism,” says the Rev. Rhashell Hunter, director of Racial Ethnic & Women’s Ministries. “The system of institutional racism is so pervasive that is continues to impact the ability of people of color to fully live out their calls in the Presbyterian Church (U.S.A.). The churchwide conversation on race, racism, ethnicity and ethnocentricity is a very significant conversation at this time in our nation. Unfortunately, we often recommend and ask people of color to attend these kinds of conferences, when many of the persons who we want to partner with us to change policies and practices to dismantle the system of institutional racism are often white Americans and, in our church, white Presbyterians. I am hopeful that we will find willing partners who can commit to the achievable goal of ending racism, becoming a more culturally humble church, and creating an environment of equality for all of God’s children.”

In addition to the conference, the Presbyterian Mission Agency Board on behalf of the Churchwide Conversation on Race, Ethnicity, Racism and Ethnocentricity Team will present several recommendations for approval at the 222nd General Assembly (2016). The full list of recommendations is available here.