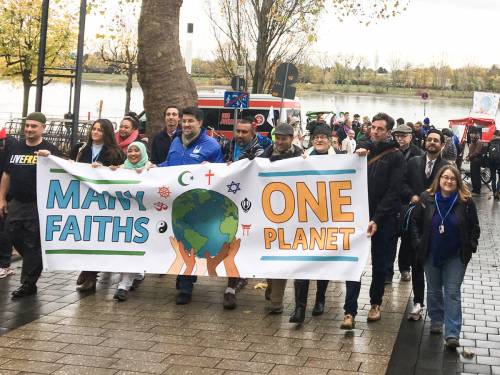 LOUISVILLE — The 23rd annual Conference of the Parties (COP23) to the United Nations’ Convention on Climate Change recently wrapped up in Bonn, Germany. The conference was hosted by the island nation of Fiji. Due to the technical challenges of getting more than 20,000 people to the island, Germany provided space for the event.

The Presbyterian Church (U.S.A) has attended the conference each year and among church representatives in Bonn was Nora Leccese, associate for Domestic Poverty and Environmental Issues with the Office of Public Witness. She says Fiji leaders were “incredibly impactful,” by championing indigenous people.

“Indigenous practices and knowledge were lifted up and centered at the conference. We heard over and over again, that this is just as valuable as western knowledge and we need to start listening to and respecting the practices of indigenous peoples,” said Leccese. “Their ways of life are often in harmony with the earth as opposed to inflicting harm on God’s creation.” 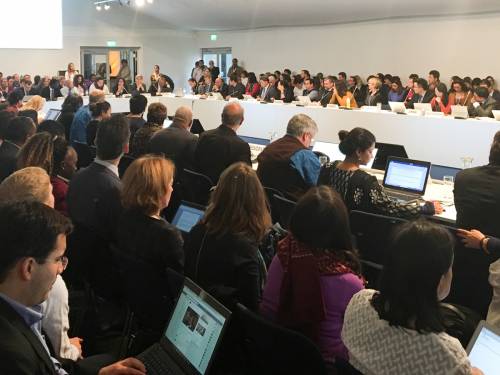 Attendees of COP23 in Bonn, Germany. (Photo by Nora Leccese)

Leccese says some people were responsive to Fiji leadership and, as hosts, they had some power in directing how the negotiations went. However, she adds there were a number of people that conducted business as usual and were “not terribly open to that call.”

Other highlights, according to attendees, included the approval and adoption of a gender action plan and discussion over the impact of climate change on women. Leccese says 80 percent of climate refugees are women, and are often forced to leave their homes in disproportionate numbers.

Earlier this year, President Donald Trump announced plans to pull out of the 2015 Paris Climate Change Agreement, but Leccese says the administration’s presence was there.

“The White House did not make an official appearance except for one panel discussion to promote coal as a climate solution,” she said. “The panel was not very welcome and it was actually disrupted by climate activists from the U.S. and around the world, who staged a walkout.”

Despite the administration’s stand, Leccese says conference delegates are prepared to keep going.

“I heard from people in the global community. They know the U.S. is out and they are moving on without us,” she said. “China and India have positioned themselves to be climate leaders in lieu of our leadership and many are discounting us and will take ambitious action without us.”

Despite frustration with the U.S. administration, Leccese says the conference announced several actions around energy, water, agriculture, transportation and forests, among others. Climate resilience and finance were also covered in discussions.

“The Presbyterian Church (USA) has been a witness at nearly every one of the international climate change talks between world’s governments since their inception. Gathering with our sisters and brothers in the World Council of Churches as well as other faith partners, we have been blessed to witness these Conference of the Parties (COPs), particularly the 2015 Paris Agreement,” said Barnes. “With multiple General Assembly policies affirming our moral responsibility to take individual, corporate and international cooperative action in the face of climate change, it is imperative that Christians continue to witness to and participate in these dialogues.”

“In my work with PHP, I have the precious opportunity of hearing the many voices of people around the world and the U.S. who already suffer the consequences of climate change. I also witness how the PC (USA) supports them to overcome states of vulnerability, homelessness, hunger and disease,” said the Rev. Dr. Neddy Astudillo, member of the PHP Advisory Committee and pastor in Wisconsin. “While providing financial aid is key for these communities while they improve their conditions, a higher purpose, faithful stewardship of all the resources God has put in our hands, should be to do all that is in our power to avoid climate change in the first place. Climate change is expected to get worse before it gets better, our resources are finite too. We need to be wise, and look at the future, not just what we can do today.”

For more information on climate change and global development through Sustainable Development Goals, download resources on the Presbyterian Ministry at the United Nations webpage, or visit Environmental Ministries.