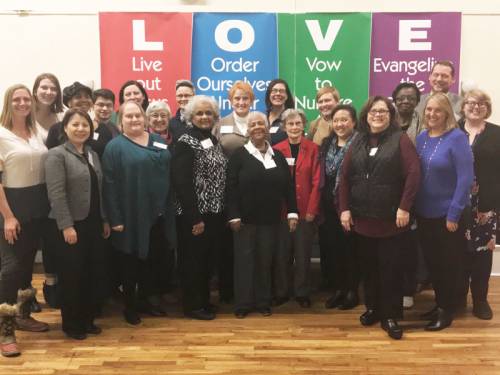 Nineteen women of the PC(USA) are participating in the Commission on the Status of Women session at the United Nations in New York. Photo by Cornell Edmonds

NEW YORK – Marvella Lambright didn’t realize that some women use dried cow dung to absorb their monthly flow of blood until she attended her first Commission on the Status of Women (CSW) session at the United Nations several years ago. There she learned that women in some countries don’t have access to the sanitary products that are available in the United States and other parts of the world. This surprised her and helped her realize that the best way to find out what is really happening in the world is to talk with people from other countries.

This year, Lambright is joining 18 women of the Presbyterian Church (U.S.A.) as well as thousands of others from around the world for the 62nd session of the CSW. The PC(USA) participants hail from farms in Ohio, neighborhoods in New York and from as far away as Florida and Alaska. The CSW brings together women (and a few men) of different backgrounds to set an agenda for empowering women and girls around the globe.

This year’s event focuses on rural women, and addressing their needs is particularly urgent. Research by the Food and Agriculture Organization of the United Nations has found that rural women across the world fare worse than rural men and urban women in every gender and development indicator for which data is available. 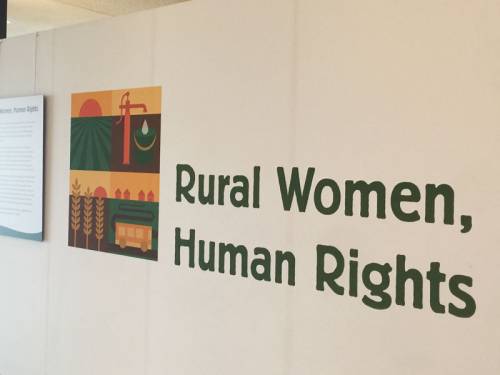 The theme for the 62nd session of the Commission on the Status of Women is empowering rural women and girls. Photo by Sue Washburn

António Guterres, the U.N.’s secretary-general, opened the event by saying that rural women are particularly marginalized and many lack access to health care, education and technology.

“Rural women are often the backbone of their families and communities, managing land and resources. They may be experts on climate resilience and on sustainable development,” he said.

Lambright, an elder from College Hill Community Church in Dayton, Ohio, remembers that conversation because it helped her realize that just being in the same space with women from around the world offered a chance to witness, talk and learn together.

She says that attending the commission is always a formative experience and that she learns in both the official events and in the hallway conversations.

“Being here is like water falling on a rock. It’s etching something as it falls, but it’s not always easy to know what it will look like in the end,” Lambright said.

As the participants explore the challenges and opportunities in achieving gender equality and the empowerment of rural women and girls, they will focus on five areas: climate change, farming and food sovereignty; access to education; transportation and access to resources like land ownership and loans; access to medical care, sexual and reproductive health and rights; and women’s empowerment in governance and structures.

Betty Folliard of House of Hope Presbyterian Church in St. Paul, Minnesota, says the CSW participants focus on the issues that are common to women around the world. She says the women from the United States shouldn’t just think of themselves as leaders, but learners. 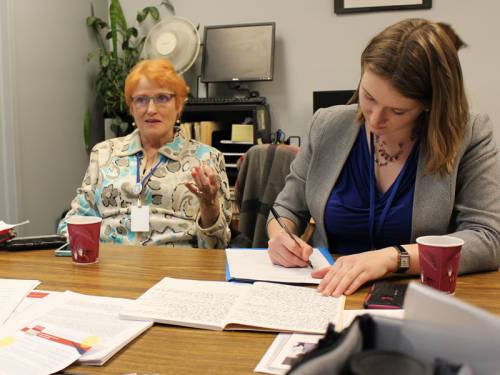 Betty Folliard and Kathryn Urban reflect on their experiences at the Commission on the Status of Women session in the office of the Presbyterian Ministry at the United Nations. Photo by Sue Washburn

“The U.S. has the perception that we do women’s issues well in the world, but the reality is different,” Folliard said. “In many measures the United States is behind. When you look at the numbers for women in government, maternal health statistics, violence against women and child care support, we are not leading.”

Folliard spent six years working with rural women when she served on the Minnesota Commission on the Economic Status of Women and feels that addressing their needs is important. She expects that her time at the U.N. will inspire her to say more and do more at home. She especially hopes to focus her energy on increasing women’s access and proximity to leaders so they can have an influence on policy, which is a challenge for rural women everywhere.

Ryan Smith, director and representative to the United Nations for the Presbyterian Church (U.S.A.), says the CSW session is intended to create change not just in New York or other countries, but in congregations and communities within the church itself.

“We hope that the ideas lifted up here become the accepted norm for the world when it comes to gender rights, especially for rural women,” Smith said. “In addition to influencing local communities, it informs the church as well. The positions adopted here tell us where the world stands. It’s a way for us as the church to check in where we are.”

The CSW session continues through March 23.