Dynamic moderator team to lead PW for next three years 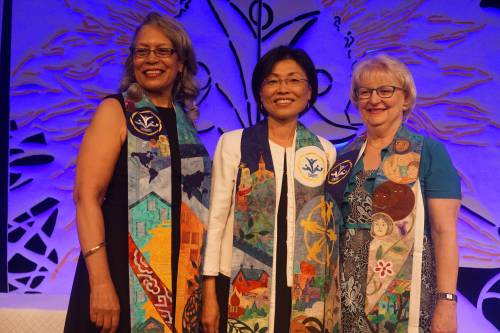 LOUISVILLE — “Don’t believe me just watch,” a line from Mark Ronson’s upbeat dance tune, “Uptown Funk,” filled the banquet hall at the 2018 Gathering of Presbyterian Women as the group of nearly 2,000 celebrated the many significant accomplishments of the Presbyterian Women Inc. (PW) over the past 30 years. And if you couldn’t believe all the accomplishments of PW, all you had to do was watch the video. Attendees were entertained and educated by the video that chronicled a timeline of historic events of the past three decades of PW.

And, to kick off the start of its fourth decade this summer, PW made history again by installing its first Korean moderator, Jenny Jyungin Lee, along with Jo Ann Burrell as vice moderator for Mission Relationships and Joy Durrant as vice moderator for Justice and Peace Issues. The three women will serve in their positions for the next three years.

Lee is the founder and executive director of Women Inc., a spiritual center for women’s education and empowerment in New Brunswick, N.J. She is a member of Covenant Presbyterian Church in West Trenton, where she serves as a ruling elder and certified minister who is ready to be called.

She said her greatest apprehension about taking on her new position is managing her family and time during her term as moderator.

“I’ve been involved with PW about 10 years; however, as incoming moderator, there is a lot to learn,” Lee said. “Jo Ann, Joy and I want to move the organization forward.”

Lee noted that PW has been described as the most adaptable organization in the denomination. She credits the group with being revolutionary in bringing to the forefront such issues as racism, sex trafficking and other critical matters facing communities around the world. In 2005 PW became a member of the United Nations Commission on the Status of Women and in July 2018 was granted accreditation to the United Nations Economic and Social Council.

Asked what’s the one thing she would like to see accomplished during her term as moderator, Lee said, “The word ‘unity’ keeps coming up and to my mind. The country is so divided, only unity and reconciliation with our past and with our neighbors will help. We must realize that we are one in Christ and we need to be united in Christ, united in the word, to move the word forward to make this world better and to move the gospel forward.”