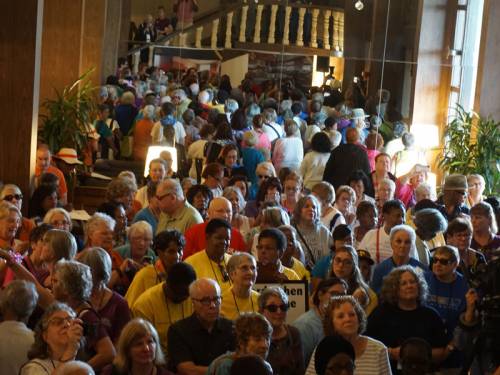 Presbyterian women from across the country gathered in Louisville for the 2018 Churchwide Gathering of Presbyterian Women. The women marched through downtown Louisville to raise awareness of the economic and social divide west of the city’s Ninth Street. PNS Photo/Gail Strange

LOUISVILLE — Over 200 people gathered at the Galt House Hotel in downtown Louisville to join the 2018 National Gathering of Presbyterian Women in the PC(USA) for Friday’s peace and justice march. Drawing attention to “The Ninth Street Divide,” organizers hope the march raises awareness of the lingering effects of racism and discriminatory practices such as redlining that have resulted in segregation in Louisville and in many other cities in the nation.

Dr. Wanda Beauman, Presbyterian Women Inc.’s vice moderator for justice and peace concerns, said the march in Louisville was a model to be used in cities all over the nation to raise awareness of the unjust practices that create divides.

Presbyterian women from around the nation and the world are meeting here Aug. 2–5 for their triennial conference that includes workshops, mission tours, worship and study. As a centerpiece of the conference, the march called women to action on behalf of underserved communities, especially those suffering from a cycle of poverty, negative stereotypes and lack of opportunity that are the result of discrimination. 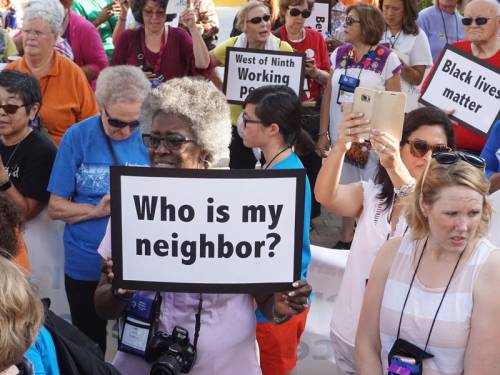 Louisville Mayor Greg Fischer said that depressed areas in cities across the country were created by design. Fischer discussed the practices of Harland Bartholomew, who was known as the dean of city and urban planning from the 1930s through the 60s. Bartholomew intentionally designed areas to promote segregation in major cities across the country, and Fischer said these practices continue to adversely impact communities today. “This is an action sport,” said Fischer. “This is not the time to be quiet. We’re all connected. It’s our job to right the wrongs of the past.”

Marchers wound through downtown Louisville, making their way down the north side of Main Street to just past Ninth Street, and back to the Muhammad Ali Center where the Rev. J. Herbert Nelson, II, Stated Clerk of the Presbyterian Church (U.S.A.), said, “It is imperative that in this call for this church to shift from an institutional model to an organizational model, we in the PC(USA) must take every opportunity to address the contextual reality that people left behind are facing.” He added that “we should do this because this is what Jesus did.”

Earlier in the day, Westboro Baptist Church of Topeka, Kansas, held a protest in opposition to the Presbyterian women in leadership roles in the church.

Presbyterian Women in the PC(USA) thanked its march partners for their guidance and support, including:

Presbyterian Women Inc., the women’s organization of the Presbyterian Church (U.S.A.), is committed to nurturing faith, working for justice and peace, supporting mission, and building inclusive communities. For additional information about Presbyterian Women in the PC(USA) Inc., contact Susan Jackson-Dowd, executive director, at susan.jackson-dowd@pcusa.org or 502-569-5368.