Trust and interpretation looms heavy over A Corp proposal 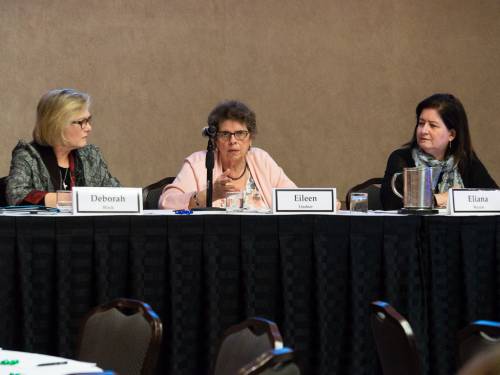 Deborah Block, All Agency Review Committee moderator, and co-vice-moderators of the Way Forward Commission, Eileen Lindner and Eliana Maxim, respond to Presbyterian Mission Agency comments on their joint proposal regarding the PC(USA) A Corp. (Photo by Gregg Brekke)

CINCINNATI — The Presbyterian Mission Agency Board wrapped up its first day of meetings in Cincinnati by hearing from representatives of the Way Forward Commission (WFC) and the All Agency Review Committee (AARC). Despite weeks of lengthy meetings and phone calls between both groups and the board’s Governance Task Force, there is still no unified agreement on the A Corp proposal based on Wednesday’s meeting.

Eliana Maxim and Eileen Lindner, Way Forward Commission co-vice-moderators, and Deborah Block, moderator of the All Agency Review Committee, each spoke to the board about the status of discussions and defended their groups’ work on a joint recommendation regarding the A Corp structure to General Assembly 223.

“We believe it is possible and necessary for the well-being of the church, that together we forge a new vision for the Presbyterian Mission Agency to move ahead with the General Assembly directive,” said Maxim. “This is tense stuff. We’re trying to do something that is different. We have consulted with the General Assembly Nominating Committee to ensure a diverse group of nominees includes each agency board and committee. This is an ongoing labor of love.”

Block told the board the proposals offered by the Governance Task Force and AARC/WFC were unanimous with the intent to bring greater health, wholeness and faithfulness to the entire church body.

“Since the beginning, we’ve been in contact with staff from PMA and have sought to be transparent. We met with the board and have tried to keep leadership informed of our work,” she said. “It was troubling to hear in our last conference call, the claim we were not responsive to the Governance Task Force. Responsive can be in the ear of the beholder. We feel we have a different experience about that responsiveness.”

Lindner defended the commission and committee’s proposals and told the group the 21st century church is vastly changing.

“We have come to a time when Protestant denominations, not just ours, are being radically challenged by dramatic change in the religious landscape of the American people. The better we are at re-defining ourselves, the better we will be at regaining some traction,” said Lindner. “We were acutely aware of staff concerns. We felt this board needed to be relieved of the burden of administrative responsibilities to focus on mission. What would it take to remove this burden from the PMA, while allowing those who receive shared services, to also participate in judgments and decisions of the services received?”

Lindner said everyone is comfortable with the status quo because it is easy, but she adds it doesn’t make it right. She said it’s important for all parties to find common language that addresses everyone’s fears and hopes.

“We heard your concern that you would not have access to General Assembly, but under this plan the PMA will report directly to GA,” said Block. “There is no attempt to remove that authority from the agency board. We put specific language in revised reports.” 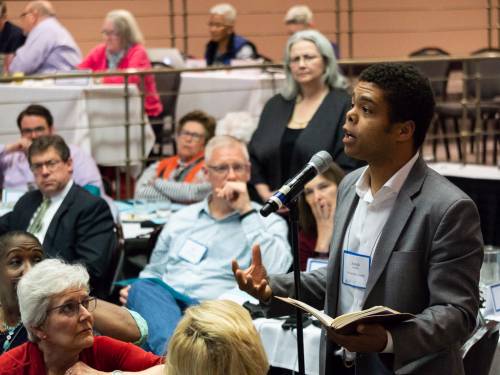 PMA Board members were given time to address the three. Warren Lesane said he felt the “tenor and tone” of the presentation was “extremely insulting.”

“I felt as if we were children and you were the adults and I don’t think that is the proper way to create dialogue,” he said. “There is no question you love the church, no argument. But how we treat and address one another in working through difficulties is paramount.”

“Our dealings have been with a small portion of the board and that has not changed. There’s been a lot of confusion and misinformation, and last-minute changing on us and frankly some disrespect for the General Assembly that created us,” she said. “We have been at work trying to do what we were asked to do. But most of the work has been met with suspicion and fear and that’s what you hear in our voices.”

PMA Board member Marci Glass said the board, too, has been frustrated.

“We know things need to change, but that is not mean we don’t want change,” she said. “We just want to make sure that the change we make is helpful and good for the church. Don’t mistake us as being anxious, we just have questions.”

“I advocate we take more time for that process in order to get it right. We need process of discernment that values each person here and on the Way Ford Commission and All Agency Review Committee. We need to look at the gifts of each person at the table,” he said. “To insist that we liberate ourselves from the administrative work is like liberating the farmer from the plow. It’s important for the commission and committee to recognize, this is our plow, part of the toolset we use in God’s house.”

Vicki Garber, board representative from the Evangelical Lutheran Church of America, said all groups must put the Lord first.

“My prayer is that maybe these groups can work together and bring something to the table that is time-honored, she said. “I have the luxury of looking at this as an outsider. I hear this ‘us and them kind of thinking’ and invite all to find the great common love for our Lord.”

The Governance Task Force is scheduled to present its report during a plenary session Thursday morning.