Christmas Joy Offering – Supporting our leaders: past, present and future.
Make A Donation Click Here >
Home › Presbyterian Ministry at the U.N. hosts event for Commission on the Status of Women 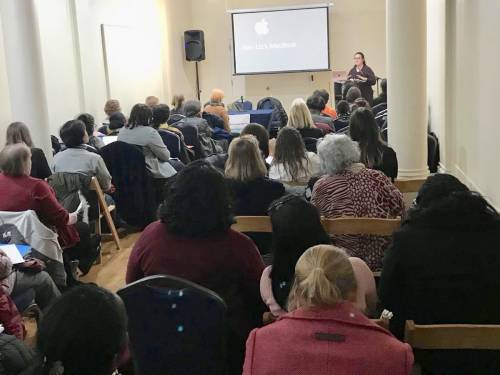 Over 60 people crowded into the room to hear the Rev. Dr. Liz Theoharis speak about poverty at the event sponsored by the Presbyterian Ministry at The United Nations for the Commission on the Status of Women at the United Nations. (Photo by Ryan Smith)

NEW YORK — Today’s heroes don’t wear power suits, fly in on fancy jets or have superpowers. The real heroes of today are the people on the street helping people who are poor, connecting communities, and risking arrest in protest of oppressive systems. Oftentimes these heroes are women who work every day to make the world a better place for themselves and their children. That was the message Rev. Dr. Liz Theoharis brought to the Commission on the Status of Women at the United Nations.

Theoharis, a Presbyterian pastor, spoke to a packed room at the event sponsored by the Presbyterian Ministry at the United Nations. Theoharis painted a stark picture of what it means to be poor in the United States.

As co-director of the Poor People’s Campaign: A National Call for Moral Revival and co-director of the Kairos Center for Religions, Rights, and Social Justice, Theoharis reminded listeners of the Biblical emphasis on the poor and marginalized in both the Hebrew Bible (Old Testament) and the New Testament.

“If you cut out the parts of the Bible about people who are poor and widows and orphans, the book would fall apart,” she said.

The Poor People’s campaign is planning a season of action from Mother’s Day to June 23 as it encourages social justice action across the US. Theoharis hopes the movement will cross the boundaries that divide people, including religious and racial boundaries, acknowledging that religious boundaries don’t just exist between different religions but between Christians as well.

“This approach to addressing systemic poverty is something everyone can align with,” Snyder said. “We need a movement that is not tied to politics, but rather a faith-based, grass-roots campaign that crosses all lines.”

People who are poor do not fit into one religious category, but Theoharis said all religions point toward basic a basic morality that calls upon people to treat their neighbors well. The Christian message emphasizes both God’s mercy for individuals and justice for communities.

“What you have in these poor communities is our powerful and sacred text that has good news for those who have been made poor,” Theoharis said. ““Our churches are good at mercy, but we haven’t been as good at justice lately.”

Alpha Brown of First Presbyterian Church of Jamaica in New York City said Theoharis’ presentation reminded her of the work her father did.

“I grew up in the civil rights movement. It reminded me of having people come to our house to organize,” Brown said. “I would love to be part of something like that today. Every should have basic human rights.”

Basic human rights and the dignity of women and children are one of the themes of the CSW.

“The Poor People’s Campaign is one of the best I’ve seen in years to remind us of the interlocking systems of oppression, which we also see at other events at CSW,” said Lindsey Groves, campus minister for UKirk in Nashville. “We can’t eradicate poverty without eradicating racism, and we can’t eradicate sexism without addressing heterosexism. Since isms and oppressions are connected, so are solutions and healing.”

Theoharis’ book Always With Us? What Jesus Really Said About the Poor? was lifted up as suggested reading at the 2017 Big Tent. She is also one of the winners of the 2018 Women of Faith Awards given by the Presbyterian Women at General Assembly.

“With our denomination focusing on a Matthew 25 church it was really great host Rev. Dr. Liz Theoharis and helping to amplify the work of the Poor People’s Campaign and to emphasize that work for the international community,” said Ryan Smith, director of the Presbyterian Ministry at the UN.