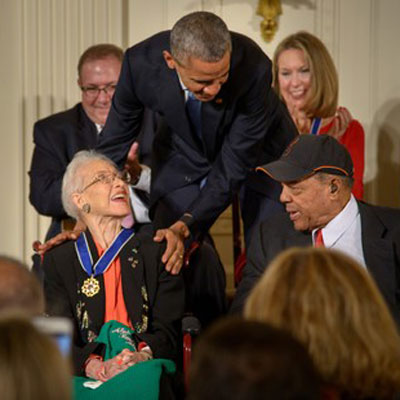 LOUISVILLE — Katherine Johnson, a mathematician and a longtime Presbyterian Church (U.S.A.) ruling elder who was an important contributor to NASA’s space program, died Monday at age 101, NASA Administrator Jim Bridenstine announced. She was 101.

“She was a faithful woman with regards to how she understood her own work, that it was directly the grace of God that allowed her to do the things that she was able to do and be able to break the barriers with work that, quite frankly, African American women were not expected to do and deemed as incapable of doing,” Nelson said. “They lived their lives in a way that represented their character during that period of time. That’s what we all have to do.”

“I was blessed to know Katherine Johnson and her family. I was especially honored to serve as pastor to her daughter, Katherine, who shares her name,” said the Rev. Dr. Diane Moffett, president and executive director of the Presbyterian Mission Agency. “I will continue to hold this family in the light of prayer, and ask that you do the same. The world is forever blessed by the contributions Katherine Johnson made to math, science and the NASA space program.”

A NASA mathematician and aerospace technologist from 1953-86, Johnson’s computations have influenced every major space program from the Mercury launches through the space shuttle program. She was hired as a research mathematician at NASA’s Langley Research Center with the National Advisory Committee for Aeronautics, the agency that preceded NASA, after the agency opened hiring to African Americans and women.

According to her NASA biography, Johnson said her greatest contribution to space exploration involved the calculations that helped synch the Apollo Lunar Lander with the moon-orbiting Command and Service Module. She also worked on the Space Shuttle and the Earth Resources Satellite and authored or co-authored 26 research reports. “I loved going to work every single day,” she said.

According to her NASA biography, Johnson was born in White Sulphur Springs, West Virginia in 1918. Her “intense curiosity and brilliance with numbers vaulted her ahead several grades in school.”

When West Virginia decided to integrate its graduate schools in 1939, Johnson and two male students were selected as the first black students to be offered spots in the state’s flagship school, West Virginia University. But she soon left school to start a family with her husband, returning to teaching when her three daughters got older.

It wasn’t until 1952 that a relative told her about open positions at the all-black West Area Computing section at Langley, which was headed by fellow West Virginian Dorothy Vaughan. Her husband died of cancer in 1956. She married James A. Johnson in 1959.

Following the launch of the Soviet satellite Sputnik in 1957, Johnson’s math contributed to the 1958 document “Notes on Space Technology,” a compendium of a series of 1958 lectures given by engineers in the Flight Research Division and the Pilotless Aircraft Research Division. Engineers from those groups formed the core of the Space Task Group, the nation’s first official foray into space travel.

She was perhaps best known for the work she did in advance of Glenn’s 1962 orbital mission. According to her NASA biography, the complexity of the orbital flight had required the construction of a worldwide communications network, linking tracking stations around the world to computers in Washington, D.C., Cape Canaveral in Florida and Bermuda. The computers had been programmed with the orbital equations that would control the trajectory of the capsule in Glenn’s Friendship 7 mission, from blast off to splashdown. But the Mercury astronauts were wary of putting their lives in the care of the electronic calculating machines, which were prone to hiccups and blackouts. As a part of the preflight checklist, Glenn, like Johnson a Presbyterian, asked engineers to “get the girl” — meaning Johnson — to run the same numbers through the same equations that had been programmed into the computer, but by hand, on her desktop mechanical calculating machine.