Prayer vigil to be held in local church on Friday 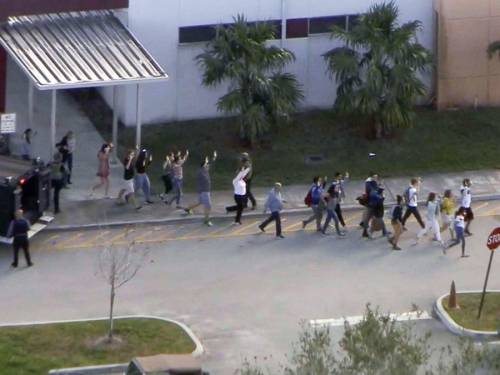 Students emerge from a building with their hands raised after reports of a shooting at Stoneman Douglas High School in Parkland, Florida, Feb. 14, 2018. (Screen capture from WPLG-TV)

LOUISVILLE — Ash Wednesday turned deadly in Parkland, Florida, when a lone gunman opened fire at Stoneman Douglas High School, killing 17 and wounding more than 14. Some of the injured remain in critical condition today.

The suspect, carrying a semi-automatic rifle, was identified as a former student who had been expelled for disciplinary reasons, according to Broward County school officials. Authorities say the shooting began around 2:30 p.m. just before classes were dismissed.

A day after the shooting, the community and its faith leaders are still reeling from what happened. The Presbytery of Tropical Florida released a statement this morning to churches and their members.

“There are no words that can capture the depth of despair we hold after the violence that took place at the school,” said the Rev. Dr. Daris Bultena, general presbyter of the presbytery. “With you, I watched the television reports, interacted on social media and sat in silence. I heard an interview with one student who said, ‘We can mourn. We can grieve. But we’ve got to push forward.’ I heard the resolve in his voice and I’m claiming that resolve for us to push forward.”

The presbytery has announced a “Vigil of Prayer and Light” at First Presbyterian Church of Pompano Beach at 7:30 p.m. Friday.

“The vigil is for everyone — pastors, elders, members, friends and the community. We are hearing stories of how members of our congregations know a student or a parent at Stoneman Douglas,” he said. “In this moment, we will do all we are able to stand with those in our community who are struggling now to see their way through this day. Be in prayer for counselors who are meeting with traumatized children, with loved ones who are reshaping their sense of reality, and with members of our congregations who are directly touched by heartbreak.”

PDA will be sending representatives to the area to be at the vigil and worship with churches on Sunday.

“We will provide an opportunity after the vigil for pastors to engage with us on how we talk about this on Sunday,” said Bultena. “We will provide a liturgy for the vigil and are preparing a resource packet that we can send to all of our pastors so they have some liturgical resources to use.”

Bultena says he’s talked with several church leaders who had a personal connection at the school.

“We had to cancel one meeting this morning. One of the scheduled attendees knew someone directly related to an individual at the school,” he said. “When I came to the office this morning, our financial administrator told me her daughter was a substitute teacher last year and taught at the school several times.”

FLAPDAN Director Kathy Broyard will be among those attending the vigil on Friday evening.

“It’s horrific. These are kids and it’s just beyond comprehension that anyone could do something like this,” she said. “This is the third mass shooting in Florida in 20 months. Other shootings include the Pulse Night Club in Orlando and the shooting in the baggage claim area of the Fort Lauderdale Airport. It weighs heavily on faith leaders when you see this kind of violence.”

Broyard says their first concerns are with the victims and their families as well as churches in the area that might have been affected by the shootings.

“We want to stay in contact with the presbytery and offer any support needed. We will also continue our involvement with Florida VOAD (Voluntary Organizations Active in Disaster) since they will be responding to this within their realms,” she said.

“It only deepens the tragedy to reflect on how unsurprising such events have become in our national psyche. According to CNN, since the shooting at Columbine High School on April 20, 1999, over 150,000 American students have had direct experience of a shooting in their school. That number, if accurate, represents a staggering exposure to trauma, trauma that is reinforced every time another mass shooting unfolds,” said the Rev. Dr. Laurie Kraus, PDA director. “Add to that the thousands of underreported and unregarded single deaths by guns that happen in our cities on a daily basis and the cost of this violence is staggering.”

The National Council of Churches released a statement this morning on the shooting.

“There is no way a troubled teenager should have had access to an AR-15 semi-automatic rifle and what was described as ‘countless magazines’ full of high-powered bullets,” read the statement. “Even as we mourn this unnecessary loss of life, we call on our lawmakers to shake off fear of the gun lobby, distractions of other legislative matters, and the paralysis of hyper-partisanship and take action to ensure universal background checks be enacted and high-powered weapons be taken off the streets of our nation.”

PDA and FLAPDAN will be offering long-term support to the region as requested by the presbytery. FLAPDAN has also been working with the Presbytery of Tampa Bay on disaster planning and indicates she may offer the same opportunities to the Presbytery of Tropical Florida.

“We have workshops scheduled on disaster preparedness and a portion of that will involve active shooter preparedness,” she said. “The workshops will focus on what churches can do to help prepare themselves for situations like this, so it’s quite timely.”

“This could happen anywhere without regard to anything or anyone. We have to have these conversations with churches on how we deal with something like this,” she said. “Churches can work with local law enforcement who can come in, review your facility and have discussions.”

To provide support for the region, click here. Kraus has written a prayer following the shooting. It can be accessed here.