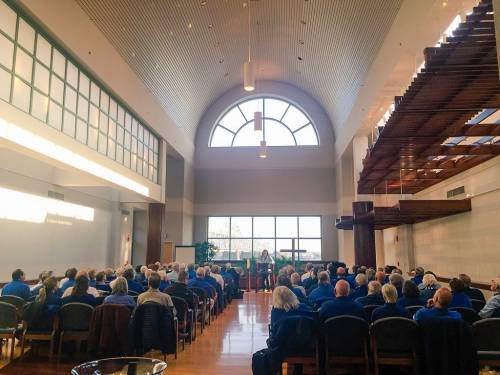 Members of Presbyterian Disaster Assistance’s National Response Team held their annual meeting in Louisville over the weekend, including one day in the chapel of the Presbyterian Center. (Photo by Cameron Stevens)

LOUISVILLE — For the 22nd year, national volunteers who give their time to assist presbyteries, congregations and communities impacted by disasters through Presbyterian Disaster Assistance gathered for their annual meeting. This year’s gathering in Louisville brought together nearly 100 members to take part in a time of “learning, connecting and relating.”

“It is within community that we find meaning and hope. It’s within community that we find healing and meaningful connections with each other and that is a big part of our time together,” said Jim Kirk, PDA’s associate for national disaster response. “The information we share can be shared in documents, webinars or similar resources. But the value of bringing people together is building community.”

Dressed in a sea of traditional PDA blue, the volunteers met for four days to exchange ideas, catch up and learn about what is new in disaster recovery. In times of natural or human-caused disasters, team members are deployed to areas of need to meet with presbyteries and churches, assess damage or impact, offer ministry of presence and make final recommendations to PDA for future assistance. The teams also lead training on such topics as compassion fatigue for pastors and care providers.

“One of the highlights of this year’s meeting has been an opportunity for people to have a greater appreciation for PDA’s story ministry through David Barnhart,” said Kirk. “Judging from the audience’s response, there seems to be a lot of energy around story ministry and hopefully it will translate into people taking that back into communities in term of screenings and panel discussions.” 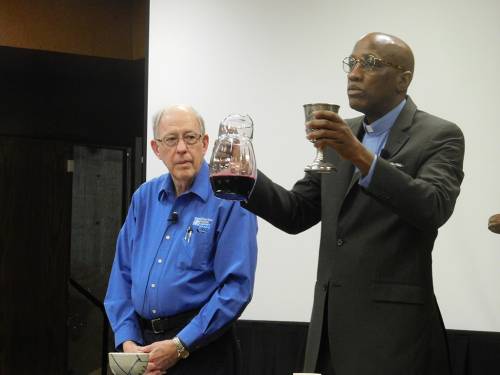 Barnhart, PDA’s associate for story ministry, has produced and directed several award-winning documentaries for the agency. During the NRT meeting, he showed clips from the latest film, Flint, which looks at water contamination in the Michigan city that has drawn national and international attention. The film will be released later this year.

Barnhart has spent years producing documentary films to be shared in churches, community groups and universities. Many of the films have garnered national attention through several film festivals.

“Stories are as basic to our lives as eating and drinking. We live our lives and stories are a core fundamental part of how we live. Everyone brings a story from their own experiences,” said Barnhart. “When we share a story on water or violence, the purpose of story is connection. Many of those who attend this annual conference are inspired to share the stories from their own communities and their own churches.”

The number of NRT members currently stands at 110, with approximately 95 attending this year’s meeting.

“A number couldn’t make it because of their jobs or health. Last October, we brought in 16 new members who were fully integrated into the team at this conference,” said Kirk. “Our goal is always 100 volunteers who serve on the National Response or National Volunteer Teams.”

Kirk says that instead of traditional plenary and breakout sessions, they conducted open space meetings — intentional conversations around specific areas of interest.

Presbyterian Disaster Assistance is able to quickly respond to emergencies because of gifts to One Great Hour of Sharing.