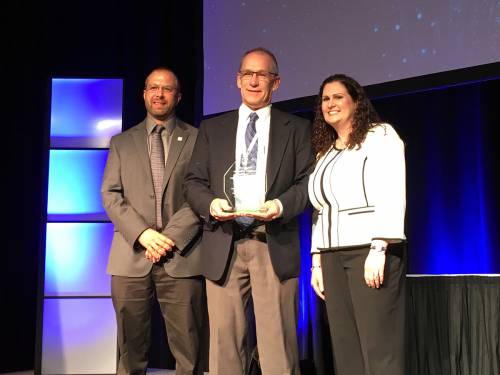 David Rauer (center), a National Response Team member with Presbyterian Disaster Assistance, was recognized by National VOAD last night as the Don Hampton Volunteer of the Year. He was presented the award by Zach Wolgemuth, chair of the board for National VOAD (left), and April Wood with the American Red Cross. (Photo by Cameron Stevens)

LOUISVILLE — The National Association of Voluntary Organizations Active in Disaster (VOAD) has selected a Presbyterian Disaster AssistanceNational Response Team member as its volunteer of the year. David Rauer received the recognition last night during VOAD’s annual awards ceremony. Rauer received the Don Hampton Volunteer of the Year Award for his disaster recovery work for the past six years.

Each year, National VOAD selects a volunteer based on the work, their organization, the number of volunteer hours and the relationships built during disaster recovery.

“I came into PDA in mid-October 2012 and was thrown into the deep end two weeks later when Hurricane Sandy struck my home state of New Jersey, so I was almost immediately put to work,” he said. “Don Hampton was one of the first to mentor me in this work and I feel very honored to accept this award from someone who was a great influence on me.”

Rauer is estimated to have spent more than 3,600 hours as a volunteer over six years, responding to disasters as needed.

“I was pretty stunned at first and had no idea that anyone had even nominated me. When I got the call from Jim Kirk at PDA, he asked if I was ready to receive this award and I was quite surprised,” said Rauer. “It’s an amazing recognition and very humbling that people would think I was worth something of this nature.”

Rauer says that once he got involved with PDA, he knew this was his calling as a volunteer.

“Most of us who get into this work feel it’s a calling. What has really struck me the most is the quality of the people that you meet within PDA, those who have the same desires that I do and want to get out and help people who are going through some of the roughest times of their lives,” he said. “To be able to help them is very rewarding.”

Rauer has been called in to support recovery efforts in tornadoes, hurricanes, floods, fires and mudslides as well as provide training on emotional and spiritual care.

“The very first disaster I was connected to was Hurricane Andrew in south Florida where a good friend of mine saw severe damage to his home. That was my first involvement with disasters and my interest in helping grew from that,” said Rauer. “Hurricane Sandy is another that sticks to my mind. Even to this day, we are still trying to help people recover and sadly not everyone has recovered yet.”

Because of his experience with FEMA in New Jersey, Rauer was called in to support recovery efforts from Hurricanes Harvey, Matthew and Irma in the states of Texas, South Carolina and Florida.

“Since meeting David in 2012, I have been impressed with his servant spirit, his willingness to do what is needed and his compassion for those in need. David’s career was as a junior high school teacher. Those attributes that led to his long and successful career; dedication, authenticity, integrity, have been applied to his work as a disaster response volunteer,” said Jim Kirk, PDA’s associate for national disaster response. “David Rauer embodies the spirit of volunteerism and is a most worthy recipient of the 2018 National VOAD Volunteer of the Year award. Well done good and faithful servant.”

For those considering becoming a disaster volunteer, Rauer says you must be willing to make some sacrifices, including being away from home a lot.

“Obviously, you are not doing work next door or down the road, you’re deployed somewhere else most of the time, so you must be ready to be away from home,” he said. “You also have to be comfortable in an environment where you don’t really know anyone. If you can handle that, it’s a big step forward in understanding and doing this work.”

Presbyterian Disaster Assistance can respond to disasters through gifts to One Great Hour of Sharing.