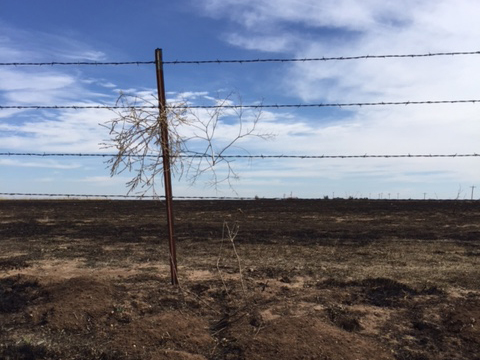 Some of the charred pastures from the recent wildfires in the Texas panhandle. (Photo by Jim Reinarz)

LOUISVILLE – Presbyterian Disaster Assistance recently sent a National Response Team to the panhandle of Texas. Recent wildfires have left four people dead, more than 350,000 acres damaged, and as many as 10,000 horses and cattle displaced. An estimated 2,500 animals are believed to have perished in the rapidly moving fires.

The wildfires broke out on March 6, impacting three counties around Canadian and Perrytown, Texas. The response team found residents working hard to restore normalcy to the region, despite the pain.

“We were in a diner in Canadian, and discovered the man next to us was the rancher who owned the land where three of the people had died in the fire. It’s hard to see a tough guy break down in tears,” said Jim Reinarz, with the National Response Team. “The county extension agent talked about how this impacted the people and you could see the emotion welling up in him.”

The NRT said the fires broke out in 80-degree temperatures, paired with 70 mile-per-hour winds. Flames are believed to have started near Amarillo and moved east.

Several members of First Presbyterian Church of Canadian are among the ranchers who suffered losses.

“They’re coping as best as can be expected. In the panhandle, we are no strangers to wildfires. But a fair number of ranchers suffered some drastic losses of cattle and their pastures,” said the Rev. Sydne Allen, church co-pastor. “They’re coping now, trying to make sure everything is documented for insurance or government purposes.”

Allen says the priority now is ensuring that the surviving livestock are fed and cared for.

“Losing livestock is devastating. If a cow loses a hoof, it has to be euthanized because it can’t walk. You can’t save a hoof that has an infection and they’ve had a very short window to triage these things,” she said. “Our ranchers are very good stewards of their resources and livestock, so this has been a difficult pill to swallow.”

NRT members say those impacted by the fires are getting help from fellow ranchers. Along the highway, the response team saw truckloads of hay bales being donated by farmers and ranchers around Texas and other neighboring states.

“You think about the loss of the grasslands where the cattle feed and that could take up to two years for that grass to come back and be productive again,” said Reinarz. “An extension agent says it costs $10,000 a mile to replace the fencing that was damaged. If you have any sizable ranch, you’re talking hundreds and hundreds of thousands of dollars just to replace the fence.”

There are some state federal assistance programs to help, but Reinarz says it’s still a big hit to farmers and ranchers who are already living on the margin.

“Power has also been an issue. They’ve had a lot of high winds and I know over the past few months, winds have damaged power lines,” said Reinarz. “Power crews all over the country have been working to restore the power from an ice storm back in January. Most of those are back up and in service.”

PDA officials say First Presbyterian Church of Canadian has been playing a significant role in helping members and neighbors deal with the fire’s aftermath.

“Fortunately, with this disaster, there were minimal human lives lost in the wildfires, but the fires did have a heavy impact on their livelihoods,” said Jim Kirk, PDA associate for national disaster response. “Thousands of acres were scorched, animals and supplies were destroyed and it could be years before people’s lives return to normal.”

“One of the most important things the NRT can provide to people in times of disaster is a ministry of presence,” said Kirk. “Sometimes the best thing we can do is simply listen and allow sacred space to develop so people can share their stories, grief and pain.”

People wishing to provide financial support for the wildfire recovery effort can make contributions to US Wildfires DR000165.

PDA is able to quickly respond to emergencies because of gifts to the One Great Hour of Sharing.