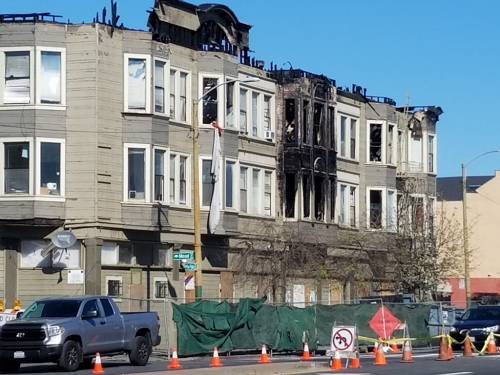 Damage to an apartment building in Oakland, California that left four people dead and more than 100 people displaced. (Photo by Mike Bullard)

LOUISVILLE – Members of the Presbyterian Disaster Assistance National Response Team recently returned from Oakland, California, responding to the latest apartment fire that left four people dead and more than 100 residents displaced. The four-alarm blaze broke out in the three-story, 43-unit building on March 27.

Witnesses say as many as 15 people had to be rescued as the smoke and flames grew. Bedsheets could be seen hanging from some windows as people found ways to escape the blaze. The fire is believed to have started on the second floor and authorities say the 122-year-old building had been the subject of a number of code enforcement complaints.

“It’s an acute manifestation of a larger problem, which is often the case with disasters. There is a housing shortage and now there are over 100 people in need of housing in the midst of a community with a severe housing problem,” said Mike Bullard, who visited the community as part of the PDA response team. “The gentrification in the community has added to the cost of housing so that large communities of homeless people are living in tents or on the streets under bypasses and awnings.”

Every urban community will have a homeless population, says Bullard, but many of these people are employed and can’t pay the $3,000 a month rent on a simple apartment.

“You have to have the first and last month’s rent and a deposit, which adds up close to $10,000 for a basic apartment,” he said. “You have employed, hardworking people who would be fine in any other community, but they live there and are stuck. Add the disabled to that and you have a huge homeless population.”

The exact number of displaced residents isn’t known. Authorities say a number of people who were living in the building were “the friend of a friend.”

Bullard credits faith leaders for the work they have been doing for residents in the area, even before the fire.

“We were just taken to school by the incredible leadership in the community and among the pastors,” he said. “We had a good learning experience, watching faith leaders work through this difficult situation and we were blessed and inspired by what we saw from them.”

The Red Cross set up a shelter immediately after the fire and many of the churches provided supplies. The Rev. Debra Avery is pastor of the First Presbyterian Church of Oakland, which served as shelter for many of the displaced residents on the day of the fire.

“They’re frustrated and sad. These are people who are the marginalized of the marginalized,” she said. “This was a homeless transitional property and many of the residents are doing their best to make it under trying conditions. The resources they had were slim and the little they had was completely lost in the fire.”

Presbyterian Disaster Assistance has provided a $7,500 grant to the Presbytery of San Francisco to be used in its ministry efforts for the area.

Avery is involved with community-based organizing and says they’re trying to pull together a housing consortium among the faith-based groups.

“It’s a very complicated situation and there are multiple issues at play including generational poverty, racism, disabled and senior citizens, everything,” Avery said.

Bullard says it’s too early to say what the long-term commitment may be but does see possible areas of collaboration around compassion fatigue.

“We need to be a ministry of presence and show that as Presbyterians, we care,” Bullard said. “We walk beside the people, we don’t take over their burden but pass on the knowledge of others that have been through similar disasters and help them that way.”

“I feel pretty resilient, but I’m worried about some of the pastors involved in relief efforts because most of us have limited staff,” Avery said. “We all have small congregations and so many of these pastors serve part-time, holding down full-time jobs elsewhere. This is a big job and it’s the small churches that are taking the lead on this.”

The recent fire comes four months after the Ghost Ship blaze in Oakland left 36 people dead. That fire broke out after a dance party at the warehouse that had been converted into living and community space.

“Many of the same people who responded to the Ghost Ship fire have once again responded to the needs of survivors in this fire,” said Jim Kirk, PDA’s associate for national disaster response. “The impact of trauma and stress is cumulative and part of what PDA can offer is a ministry of presence to those who are responding.”

For more information, go to the web site of the Presbytery of San Francisco: http://www.presbyteryofsf.org/