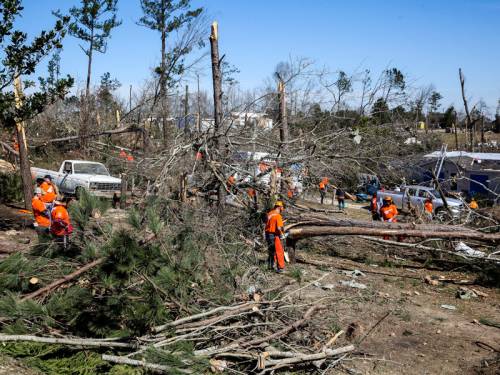 FEMA crews clean up after a tornado struck Mississippi and Alabama in late February. Robert Kaufmann/FEMA

LOUISVILLE — There was a time, it seems to the Rev. Jim Kirk of Presbyterian Disaster Assistance, that specific phenomena were isolated to different parts of the calendar.

“What we’re finding — and this is anecdotal — is less and less defined disaster seasons,” says Kirk, Associate for National Disaster Response for Presbyterian Disaster Assistance (PDA). “The parameters have expanded with the possibility of severe weather year-round.”

Indeed, as spring has sprung, Kirk and PDA personnel are managing several domestic disasters including flooding in the Midwest and late winter severe storms and tornadoes in the Southeast.

“I expect PDA will be involved at several levels,” said Greg Smith, a member of the PDA National Response team deployed to the Presbytery of Missouri River Valley to assess damage from flooding that has affected 70 percent of Nebraska, as well as significant portions of Iowa and Missouri.

The flooding, caused by heavy rains and rapid snow melt, has resulted in more than $1 billion in damage and at least three fatalities, according to Nebraska Gov. Pete Ricketts, in news reports.

Smith is part of two PDA National Response teams currently deployed to the Midwest to assess flood damage. In addition to the Presbytery of Missouri River Valley, PDA personnel are working with the Homestead Presbytery in Central Nebraska and the Presbytery of Des Moines.

At this time, as the situation is still unfolding — the Missouri River is due to crest over the weekend — Smith says the most effective way Presbyterians can help is to contribute to recovery efforts through the One Great Hour of Sharing special offering at their churches or online. A major portion (32 percent) of that offering goes to the work of Presbyterian Disaster Assistance.

Smith says he does expect there will be long-term PDA involvement in Nebraska and Iowa and said people who would like to volunteer to aid recovery can expect those opportunities soon.

Earlier this month, PDA responded to storms and a tornado that hit eastern Mississippi and Alabama in late February. Kirk said an initial response grant of $7,500 each had been distributed to the Presbytery of Sheppards and Lapsley and the Presbytery of St. Andrew following PDA National Response Team visits in early March.

Click here to contribute to PDA’s work in storm recovery in Alabama and Mississippi.

Kirk says the team met with presbytery leaders as well as pastors and congregations involved in storm recovery.

“I continue to be amazed at the level at which local Presbyterians become engaged in response,” Kirk says. “They reach out beyond their walls to those impacted.”

The work of Presbyterian Disaster Assistance is supported by the One Great Hour of Sharing Special Offering. Support the offering and PDA’s work in recovery from Midwest flooding here and storm recovery in Alabama and Mississippi here.