by Rick Jones | Office of the General Assembly 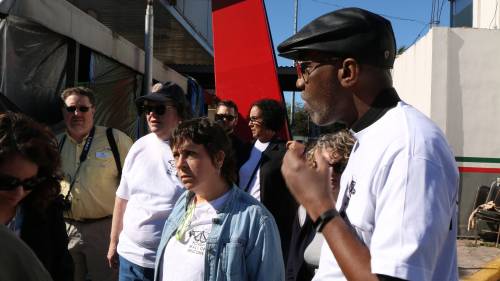 The Rev. Dr. J. Herbert Nelson, II, Stated Clerk of the General Assembly, right, and Valerie Young, left, with Synod of the Sun, listen as families share their stories at the Mexico border. (Photo by Rick Jones)

McALLEN, Texas — It’s been a long four months for Marleny and her family. Since Aug. 28, she, her daughter, son-in-law and nine-year-old grandson have been on the road from El Salvador to the U.S. border. They’ve been at the Mexico-U.S. border for two weeks and are still waiting to talk with border officials.

A Presbyterian Church (U.S.A.) delegation met with Marleny and other families awaiting their turn this weekend across the river from Brownsville, Texas. The Rev. Dr. J. Herbert Nelson, II, Stated Clerk of the PC(USA), Rev. Jimmie Hawkins, director of the church’s Office of Public Witness, and Ruling Elder Vilmarie Cintrón-Olivieri, co-moderator of the 223rd General Assembly, were accompanied by Amanda Craft and Teresa Waggener with the church’s Office of Immigration Issues, as well as Rev. Dr. Sallie Watson, general presbyter with Mission Presbytery and Valerie Young, synod executive with the Synod of the Sun.

On Saturday, the delegation crossed the border into Mexico to hear the stories firsthand.

Before making the trip across the bridge, the group met with Mike Seifert, border strategist with the ACLU of Texas. He works with a coalition of eight community-based organizations that serve more than 100,000 residents along the border. For 24 years, he was a Roman Catholic priest in the Rio Grande Valley.

“We were supposed to take what Jesus said seriously about helping the poor,” he said. “Immigration is seen as a criminal violation of civil law, much like jaywalking. For people of faith, there’s something that’s not right about this.”

Seifert told the group that immigrants have become a “handy political football” in the state and billions of dollars have been spent to beef up the state’s patrol presence here. On the other side of the border, he says pressure is on families to stay out of harm’s way.

“From here to Laredo, it is considered very dangerous because the cash crop is immigrants,” he said. “Cartels and criminal organizations are hungry, so they go out and kidnap people to make ransom money, to organize their drug business.”

Once the delegation reached the Mexico side of the border, the group witnessed long lines of people with visas, waiting to cross over into the U.S. Families come on Saturday to shop and buy food and supplies for the week. Seifert says they may wait an hour to three hours before they are able to cross.

That’s when Nelson and the others met Marleny and heard about her four-month journey. She told the group how her family bunks in a shelter by the bridge and waits each day to be called from the long list of people seeking to cross the border. 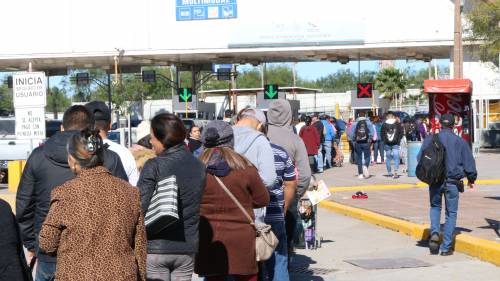 Hundreds of people with visas wait two to three hours to cross the border bridge from Mexico into Brownsville, Texas. (Photo by Rick Jones)

“We’ve been blessed by congregations from the U.S. coming through and feeding us twice a day,” she said. “They bring clothes, bedding and even toys for the children. We love it when the church comes to visit, and we are very grateful.”

She began to cry as she shared with the group her relationship with God.

“I have a very strong faith and know God will take care of us,” she said. “When we left, we didn’t know what to expect when we got here. We believe all of this is going to change soon.”

Other families from Cuba, Africa and Guatemala share the space with Marleny and her family. “We are all getting to know each other as we stay in the shelter here. We realize that this isn’t the end but part of the journey.” 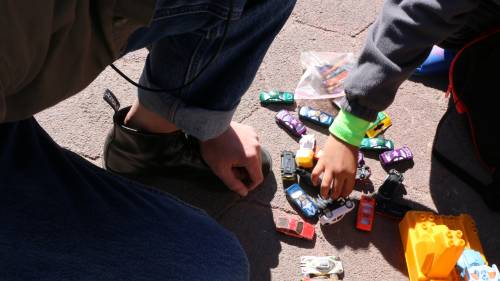 A PC(USA) delegation member plays cars with a young boy at the border. (Photo by Rick Jones)

If granted asylum, she hopes to join her sister who lives near Washington, D.C. “Mexico is big, but my God is bigger and with everything we’ve gone through to get here, we are going forward with faith. I’ve asked God for the right words and God has answered me.”

Upon returning to the U.S. side of the border, the delegation met with the Austin Seminary students for a time of worship at the gate. The student delegation had spent the morning volunteering at Sacred Heart Humanitarian Respite Center in McAllen.

“Some of us built picnic tables while others moved and folded and sorted a lot of clothes,” she said. “When people saw us working, some would come and begin helping us, saying it was their way of contributing.”

The Austin Seminary students were aided by an emergency grant from the Synod of the Sun’s Peacemaking fund. The grant paid for student transportation and donations of supplies to the respite center. The Office of Immigration Issues also provided a partner grant.

For volunteer opportunities with Presbyterian Disaster Assistance, go to https://www.presbyterianmission.org/pda-blog/2018/11/08/called-to-help/

To see the video “Genesis of Exodus: Root Causes of Central American Migration, go to https://genesisofexodusfilm.com/