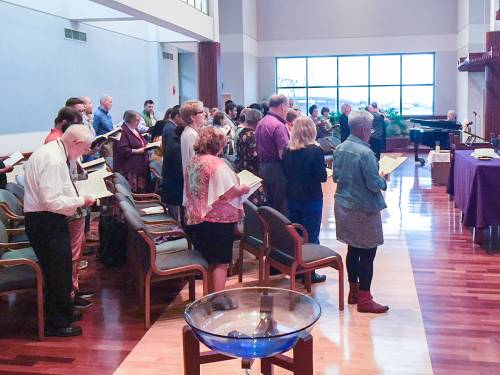 LOUISVILLE – “He grabbed my hair and pulled and yanked. … He grabbed my head and began pounding it into the top step and all I could do was cry and fight back. It hurt so bad that I could barely stand the pain. … I remember saying to myself, ‘If there is a God, please help me. I will never doubt your existence again.’ I never believed in God until that night.”

The Call to Worship, led by Jewel McRae, called upon people to “gather in each other’s presence as we remember, confess, name and respond to the violence in our lives, in our families, in our churches and in our communities.”

Yvonne Hileman led a Prayer of Lament and a Call to Remember those who have lost their lives, literally or figuratively, as a result of domestic violence. Next to her sat a table and an empty chair that symbolized lives taken by abuse. Hileman lit a candle of remembrance and shared a brief personal anecdote about the loss of someone she knew, then she encouraged the congregation to observe a moment of silence to reflect and honor individuals who have been affected by domestic violence. 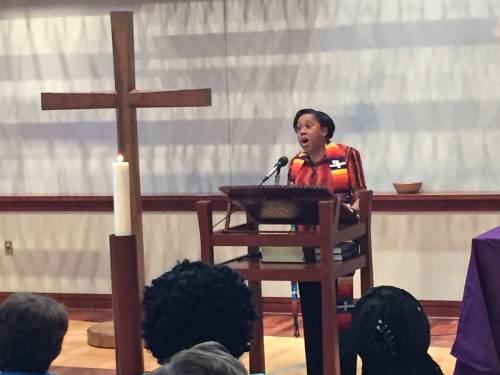 Several powerful narratives of abuse followed, including the story of a woman who promised to marry her boyfriend after being beaten one night, only to sneak out of the house in the middle of the night to a neighbor’s house, where she called the police. Three years later, she is happy, yet watchful of her abuser who is still in jail. Another woman was shot by her husband and spent 17 days in the hospital, including eight in the ICU. A man’s mother was physically abused by his wife during a property dispute, only to be threatened with trespassing in his own home by the police. Four counts of assault and battery, including photo evidence and witnesses, yielded no arrests or convictions in his case.

Leading the Testimonies of Healing, Rhashell Hunter, director of RE&WM, pointed out that the 213th General Assembly (2001) approved a policy statement entitled “Turn Mourning Into Dancing.” It calls on the church to be a sanctuary for victims and survivors, call abusers to accountability and work for systemic change so that violence is not accepted or legitimized.

“The No. 1 priority is to protect the victim from further abuse. The immediate safety of the person harmed or threatened must be secured,” Hunter said. “Those of us in the church can help the victim get to a safe place, but the abuser’s violent behavior must be confronted. The violence needs to be named for what it is — a sin before God.”

Hunter also said that research points to arrest as the single most effective deterrent to future abusive behavior, noting the possibility that it could be the first time that anyone with authority has made it clear to the abuser that his or her behavior is wrong, criminal and intolerable.

A prayer for domestic violence healing was offered: 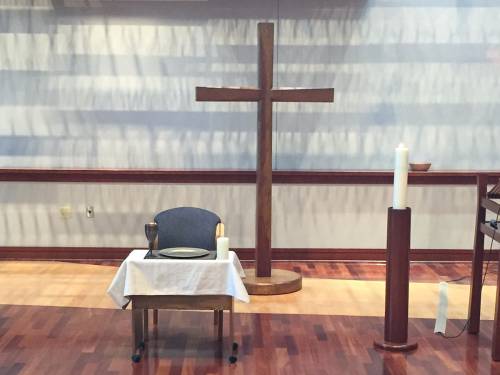 An empty chair represents individuals whose lives have been taken by abuse. (Photo provided)

We are the church.
We offer ourselves to you, O God, our creator.
We offer our hands.
May we use them to extend a healing touch to comfort sisters and brothers and children, youth and seniors who are afraid.
We offer our eyes and ears.
May we see and hear the signs and stories of violence so that all may have someone with them in their pain and confusion.
We offer our hearts and our tears.
May the hurt and sorrow of the abused echo within us.
We offer our own stories of violence.
May we be healed, as we embrace each other.
We offer our anger.
Make it a passion for justice.
We offer all our skills.
Use our gifts to end violence.
We offer our faith, our hope, our love.
May our encounters with violence bring us closer to you and to each other. In every congregation of every faith, victims, survivors and abusers sit in our pews.
Some are listening for words of recognition, understanding, comfort and healing, hoping to hear that the church stands with them in their suffering. All need to hear a clear message that violence in our homes is against the will of God.
Our silence makes us complicit to the suffering. This Domestic Violence Awareness Day, let us make our churches places where the gospel of wholeness is heard and lived out. We offer our prayers and our peace in that journey.
All this we ask through Jesus Christ, who knows the pain of violence. Amen.