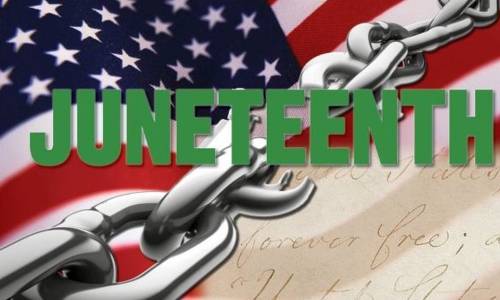 LOUISVILLE — COVID-19 has us all sheltering in place and employees of the Presbyterian Church (U.S.A.) are still working from home. But on Friday there was a great sense of oneness as the staff came together to celebrate Juneteenth.

With the sound of African drums and vivid images of Juneteenth celebrations from all over, the virtual service was one of true exuberance.  Rev. Carlton Johnson, Associate for Vital Congregations, opened the service by recognizing the importance of an enslaved people’s African heritage and culture.

Johnson then shared with the group the significance of the Ritual of Libations and enacted the Pouring of Libations. Libation in Africa is a ritual of heritage.  The ritual involves offering a drink to honor and please the Creator, the lesser divinities, sacred ancestors, humans present and not present, as well as the environment.  The origin of libations are found in legends, myths, and the language of Kemet.

Libation is both sacred and communal. Pouring libations can help overcome fears, anxieties and frustrations. It promotes respect for elders and the ancestors, hope, healing, unity and harmony all through the reinforcement of common bonds.

Johnson then invited individuals to call the names of those ancestors who fought for freedom, justice and liberation.

Celebrated on the 19th of June, Juneteenth commemorates the emancipation of enslaved people in the U.S. President Abraham Lincoln issued the Emancipation Proclamation, freeing slaves, in January of 1863. However, it wasn’t until two years later, on June 19, 1865, when Union soldiers landed in Galveston, Texas, with news that the war had ended and that the enslaved were now free. After this, more than 250,000 slaves across Texas learned that they were free.

The Emancipation Proclamation announced on September 22, 1862 by Lincoln was issued under powers granted to the president “as a fit and necessary war measure.”

“That on the 1st day of January, A.D. 1863, all persons held as slaves within any State or designated part of a State the people whereof shall then be in rebellion against the United States shall be then, thenceforward and forever free…” However, due to the small number of Union troops in Texas at the time, the proclamation was not enforced.

Two and a half years later, in June of 1865, Major General Gordon Granger, Commanding Officer of the District of Texas, along with more than 2,000 Federal soldiers of the 13th Army Corps arrived in Galveston. Soldiers marched through Galveston reading General Order No. 3 at numerous locations, including their headquarters at the Osterman Building courthouse, and then the Negro Church on Broadway, as Reedy Chapel-AME Church — “The Mother Church of Texas” — was referred to then. The order informed all Texans that in accordance with a Proclamation from the Executive of the United States, all slaves were free.

Friday marks 155 years since the reading of General Order No. 3, which stated, “The people of Texas are informed that, in accordance with a Proclamation from the Executive of the United States, all slaves are free. This involves an absolute equality of personal rights and rights of property between former masters and slaves, and the connection heretofore existing between them, becomes that between employer and hired labor. The Freedmen are advised to remain at their present homes, and work for wages. They are in formed that they will not be allowed to collect at military posts; and that they will not be supported in idleness either there or elsewhere.”

One of the many powerful moments of Friday’s celebration was the reading of a litany which was an adaption from the Black National Anthem, “Lift Every Voice and Sing,” by James Weldon and J. Rosamond Johnson. As the employees read verse, the music director of  the new worshiping community JUDAH Fellowship, Anita Levels, responded with melodious notes of purity and soulfulness as she sang with a voice that transcended the internet.

To transport viewers to an outdoor Juneteenth celebration, organizers of the service shared a virtual performance by the Rara Tou Limen Dance Company of a traditional Juneteenth Ritual of Remembrance.

The 2020 Juneteenth is being celebrated in a nation that quite possibly may be as divided now as it was in the years leading up to the Civil War. As Carter Anderson sang Marvin Gaye’s “What’s Going On,” the poignant but powerfully political song of the 1970s with lyrics inspired by violence and police brutality in America reminded worshipers that there are still unresolved issues and freedoms in our country that are yet to be realized by Black America.

All of the hopes, dreams and freedoms of enslaved black Americans and their ancestors did not become a reality at the signing of the Emancipation Proclamation, However, black Americans continue with a resiliency  and determination strengthened by the lyrics of the celebration’s closing gospel song, sung by Tamron Keith, Associate Director for World Mission, “Victory is mine, Joy is mine, Happiness is mine, Victory today is mine.” And while the fight for equality continues, on Juneteenth 2020, blacks celebrates the victories won.