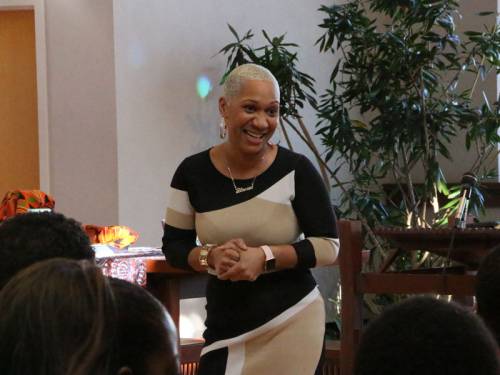 LOUISVILLE — Carlton Johnson, an associate for Vital Congregations and a worship leader for the Black History Month service at the Presbyterian Center Wednesday, opened the service with a soulful rendition of the hymn “A Charge to Keep I Have.” The hymn served to remind worshipers that during the time of slavery, those enslaved were killed for knowing how to read — and therefore much of the communication had to be done through song.

This service also presented the opportunity for the debut of the Presbyterian Center Choir, which started with an updated gospel version of an African American traditional hymn “I’m So Glad Trouble Don’t Last Always.” The choir offered songs that covered a panorama of music of formerly enslaved African people on this continent. The choir further showcased its skills with an a capella, “Sing Out, March On.”

The speaker for the Black History celebration was Tiffany Walker. For the past five years, Walker has provided spiritual care as an Emergency Room chaplain at the University of Louisville Hospital. She’s also been the chaplain on the Palliative and Holistic Care team of Jewish Hospital, also located in Louisville.

Walker is currently preaching and teaching the Gospel within the Presbyterian denomination, offering a practical perspective on Christianity and Christians’ spiritual walk with God.

She opened her sermon by telling the worshipers, “I hope that you leave here with a renewed since of self-worth, that you would have learned something new about the famous and historical civil rights movement and the leader of that movement, the Rev. Dr. Martin Luther King, Jr., and his call to equality, justice and brotherhood for all people.”

Walker then offered a prayer by the famed preacher and civil rights activist. It was one of Dr. King’s prayer from a collection of 68 prayers titled “Thou, Dear God: Prayers that Open Hearts and Spirits.”

As the Scripture reference for her message, Walker used John 8:36: “So if the Son sets you free, you will be free indeed.”

“As I prepared for this moment with you today, I was asked to reflect on the theme for this service, ‘Keeping the Dream Alive,’” she said. “I asked myself, as a middle-aged, 21st century African American woman, ‘What does it mean to me to keep the dream alive?’”

Walker commented that King’s 1963 speech during the March on Washington provides a small glimpse into what “keeping the dream alive” should mean for us all.  She said at the end of King’s prepared remarks, which announced that African Americans wished to cash the “promissory note” on the principles found in the Declaration of Independence and U.S. Constitution, King began his most quoted oration – the “I have a dream” speech.

Quoting from King’s speech, Walker said, “’So I say to you, my friends, that even though we must face the difficulties of today and tomorrow, I still have a dream.  It is a dream deeply rooted in the American dream that one day this nation will rise up and live out the true meaning of its creed — we hold these truths to be self-evident, that all men (and women) are created equal.”  He then appropriated the familiar words of the hymn “My Country, ‘Tis of Thee” before concluding: “And when we allow freedom, when we allow freedom to ring, when we let it ring from every village and hamlet, from every state and city, we will be able to speed up that day when all of God’s children — black men and white men, Jews and Gentiles, Catholics and Protestants —  will be able to join hands to sing in the words of the old Negro spiritual, ‘Free at last, free at last, thank God Almighty we are free at last!’” 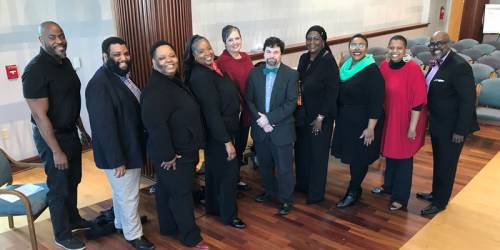 Walker then posed this question to the audience: “Are we free?”

“Between 1980 and 2015, the number of people incarcerated in America increased from roughly 500,000 to over 2.2 million,” she said. “Today the U.S. makes up about five percent of the world’s population but is home to 21 percent of the world’s prisoners. One in every 37 adults in the U.S., or 2.7% of the adult population, is under some form of correctional supervision.” Walker went on to point out the racial disparities of incarceration between black and brown people and whites. “But let’s look at the racial disparities in incarceration according the NAACP’s website,” she said.

According to the NAACP’s site, in 2014, African Americans constituted 2.3 million, or 34% of the total 6.8 million correctional population. African Americans are incarcerated at more than five times the rate of their white counterparts. The imprisonment rate for African American women is twice that of white women.

She also commented that African Americans and whites use drugs at similar rates, but the imprisonment rate of African Americans for drug charges is almost six times that of whites.   “This is no accident, people,” she said.

Walker says we can let freedom ring by supporting prison reform on a legislative and politically just level.  “We can no longer act as if there are no racially motivated disparities within our justice system. It’s time to reflect our wisdom through our vote,” she said.

“As Christians we operate by and through a theology that is socially conscious and as a collective, we operate as social justice advocates and disciples of Jesus Christ,” she said.

While African Americans have made progress towards the dream King spoke of, Walker reminded us of King’s statement that “Progress is never straight.”

“It encounters obstacles and the path bends, like curving around a mountain,” she said.  Thus, King concludes, “the great problems black people confront is the lack of power … and power properly understood is the ability to achieve purpose.”

“If power is what is needed, then the better question to ask ourselves is, ‘What does freedom cost?’” Walker asked. “How will you let freedom ring as we live out King’s dream of power and purpose?”

“Where you sit right now, in this very moment, somebody some 50 plus years ago fought for you to be right here right now, sitting here in this chapel … free,” she said.  “Free Indeed!  Now it’s your turn to pay it forward, to yourself and to others.  It’s time to let our freedom ring!”