PMA leader says its gifts will help in its focus on poverty, racism and vital congregations 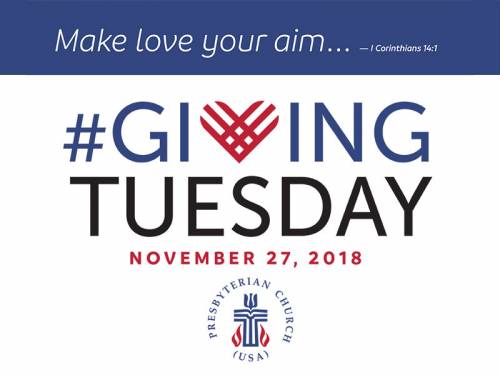 LOUISVILLE — The Presbyterian Mission Agency (PMA) and the Office of the General Assembly (OGA) exceeded their $100,000 goal on #GivingTuesday, receiving $105,673 during the event held last week.

“I am grateful for everyone who supported God’s mission on #GivingTuesday through the Presbyterian Church (U.S.A.),” said the Rev. Dr. J. Herbert Nelson, II, Stated Clerk of the General Assembly of the PC(USA). “Particularly in this season, as we anticipate the celebration of God’s greatest gift to us, I am encouraged by every gift that Presbyterians offer to God. These acts of generosity express our gratitude to God for all that God has done for us.”

#GivingTuesday is held annually on the Tuesday after Thanksgiving and on the heels of the widely recognized shopping events of Black Friday and Cyber Monday. It was created in 2012 by New York’s 92nd Street Y in partnership with the United Nations Foundation. #GivingTuesday’s organizers describe it as “a global day of giving fueled by the power of social media and collaboration.”

The Rev. Dr. Diane Moffett, president and executive director of the PMA, said the gifts the PMA received on #GivingTuesday will help it in its “trifold focus” on poverty, systemic racism and vital congregations. “I am grateful that so many have embraced #GivingTuesday as one more avenue to support their church with financial gifts,” she said. “I deeply appreciate them and all other supporters of Presbyterian Mission.”

The PC(USA) has been participating in #Giving Tuesday since 2014. The Rev. Rosemary Mitchell, the PMA’s senior director of Mission Engagement and Support, noted that giving to the PC(USA) on #GivingTuesday has grown each year, and she expects the trend to continue. “With its emphasis on social media, #GivingTuesday provides us an opportunity to engage a new generation of mission supporters,” she said. “I marvel at the mission commitment of Presbyterians, and I am optimistic about the future that is before us.”