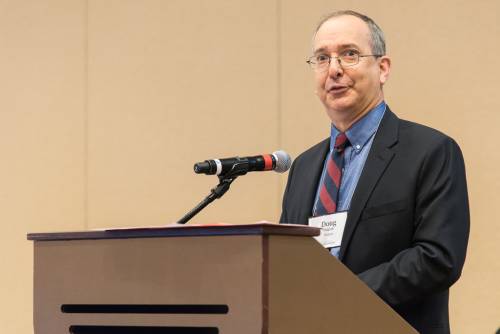 Doug Dalglish, president of Presbyterian Pan American School, was on hand for the recent PMA Board meeting. Speaking to Board members Dalglish said, “All of our schools seek to educate people who would otherwise not have the opportunity if not for these Presbyterian Schools… The church gives us the opportunity to educate these kids and in return we provide future leaders for the community and particularly for the PC(USA).”

A prime example, he noted, is Lemuel Garcia, a graduate of Pan Am who now serves as the associate mission director for Racial Ethnic & Women’s Ministries of the Presbyterian Mission Agency.

Dalglish said the PC(USA)’s support lends credibility to the school and connectivity to the church at large. “Parents feel better about their children attending school so far away from home when there’s a connection to the Presbyterian Church,” he said.

He noted that many of the students have parents or other family members who attended the school. “I see the progression of my own family in the students at Pan Am,” he said. “My uncle is a graduate of the school and now I serve as president… Unfortunately, racism is still a big issue in our country. Pan Am offers an environment of diversity where every culture is welcomed and accepted and every culture has something to add to the learning experience.”

Dalglish closed his remarks saying, “We’re excited about the action of the PMAB. We are looking forward to being in St. Louis and the continued partnership with the Presbyterian Church (U.S.A.)”