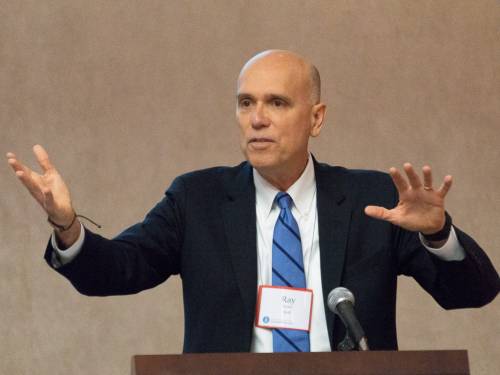 CINCINNATI — The Presbyterian Mission Agency Board (PMAB) ended its pre-General Assembly board meeting here reaffirming, with one amendment, its Governance Task Force’s comments (GTF) to General Assembly 223 (2018) regarding the reformation of the A Corp proposal from the Way Forward Commission and Office of the General Assembly.

Asked by the 222nd General Assembly (2016) of the Presbyterian Church (U.S.A.) to “study and identify a vision for the structure and function of the General Assembly agencies of the PC(USA),” the Way Forward Commission (WFC) produced a series of recommendations including several addressing the distribution of shared services and the form and function of the A Corp — the legal entity of the PC(USA) — in relation to the PMAB.

The PMAB currently constitutes the entire board of the A Corp. Recommendations in the WFC report create an A Corp board with representation from the PMA Board and other agencies and affiliated organizations that use shared services.

Other business of the PMAB this morning included the nomination of at-large members of the board to serve as representatives to other boards, the sale of four pieces of property, the approval of an audit to be forwarded to the General Assembly, and the move of management of the Church Loan Program to the Presbyterian Investment and Loan Program (PILP).

The board also received financial statements and budgets for 2019 and 2020 of $71.2 million and $70.5 million, respectively. The balanced budgets do not use unrestricted reserves to offset expenses in accordance with a 2018 plan to restore these reserves, which currently have a balance of $12.5 million. An across-the-board flat rate cost recovery rate of 17 percent was proposed, and 2016 and 2017 year-end statements that will be reported to the General Assembly this summer were approved.

The board affirmed the proxy voting recommendations of the Committee on Responsibility Through Investment (MRTI). The Presbyterian Church (U.S.A.) Foundation/New Covenant Trust Company and the Board of Pensions are requested to vote proxies on shareholder resolutions submitted to companies in which they own stock.

Mid councils, related institutions, congregations and individual members of the denomination are also asked to consider proxy voting when voting on shareholder resolutions. 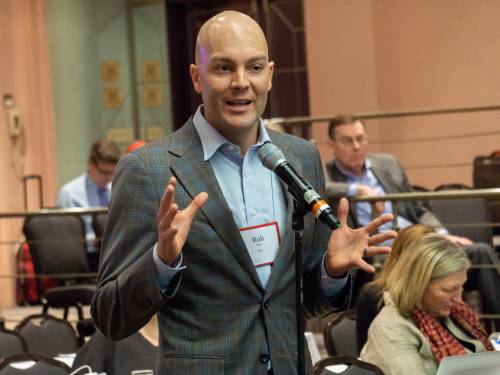 Addressing the board, Rob Fohr, director of the PMA Office of Faith-Based Investing, said it has been an “enormously successful” year of meetings with corporations in which the church invests.

“There are known and unknown pools of money held by seminaries, colleges, congregations; probably in the tens of billions of dollars, not all in direct equity stocks. There is a lot of power to influence corporate America,” he said. “This week we met with Noble Energy, where the CEO and board of directors sent strong signals that they will be more aggressive in planning and providing information around climate change risks.”

The Ministry in a Divided Nation Ministerial Team asked that its term of service be extended until the April 2019 PMAB meeting, at which time it will present a report and recommendations on topics including community organizing, local advocacy priorities, soul care for faith leaders, immigration advocacy and issues of deportation, mass incarceration, and relationship building within the PC(USA), ecumenically and interfaith circles.

Board chair Ken Godshall announced the appointment of Rhashell Hunter, director of Racial Ethnic & Women’s Ministries; Barry Creech, director of policy, administration and board support; and Jose Luis Casal, director of World Mission, as the three-person team that will work as the leadership for the PMA for a two-month period while the search for a permanent executive director continues.

Debate on a substitute motion on comments to the General Assembly

Board member Marci Glass introduced the substitute motion by saying she “had concerns about the tone of the comments and was concerned about how we position ourselves to be heard at the General Assembly.” 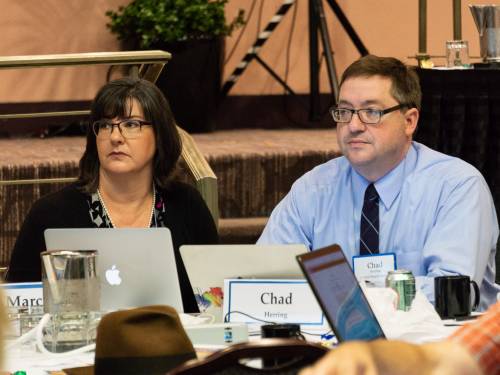 Glass’ motion, co-authored with board member Wendy Tajima, asked that editorial comments in the original comments be removed and that the language be revised to strike a more positive tone.

Expressing further concerns that the PMAB comments would not be at the forefront of General Assembly commissioners’ minds as they enter their work in June, Glass acknowledged that the amount of information being received by commissioners on this matter could be daunting.

“They are going to have seen a big presentation from the Way Forward Commission and not have seen anything from us,” she said. “If all they see is our comments, they will wonder what’s wrong with the PMAB.”

Glass continued, “I still have some problems with the separation of the PMAB and A Corp, and I’ve added some lines so the WFC will be clear about what they mean when they talk about shared services. Putting different people in charge of the A Corp will not address that concern. The GA has not tasked us to reinvent that; they’ve asked the WFC to do that.”

“I’m against striking the historical data, so I speak against these amendments in favor of the original motion,” said Lesane.

“I think a tone of firmness in our grounding needs to be implemented right out the gate,” said Yoda. “If I read a comment and I have to read thousands of other documents, I’m going to read the ‘we affirm’ or ‘we support.’ I would like to figure out a way to send this back to the GTF to continue the conversation as we head to the General Assembly.”

Chan agreed, saying, “My hope is the spirit will move these people through love, because if we try to gloss things over we’ll just end up kicking the can down the road. We do have significant concerns. I don’t know why you’d say we affirm this proposal, even if we affirm part of it.”

Speaking against the substitute motion, Rocha said, “What we’re doing now is watering it down and trying to make nice. I understand making nice, but we need to be clear about our position. When we’re in committee we’re going to have the opportunity to be respectful and nice … and that will happen before the committee.”

Board member Chad Herring countered the substitute motion, saying it “consolidates our points into a respectful tone.”

After debate was closed, a vote to accept the substitute motion was defeated 13–12. An amended original proposal, expressing incomplete support for the AARC/WFC recommendations, was passed and will be forwarded to the General Assembly for consideration.

Prior to the close of the meeting and the open plenary of the PMAB, Heath Rada, Moderator of the 222nd General Assembly (2016), introduced a motion regarding the potential opportunity for peace on the Korean Peninsula, citing “our strong historical bonds of Presbyterian relationship in Korea” to “call upon the members of the PC(USA) to engage in deliberate prayer asking that the influence of Jesus Christ, the Prince of Peace, will reign supreme.”

Various working groups of the PMAB will gather during this summer’s General Assembly. The next scheduled meeting of the PMAB is Sept. 26–29 at a yet-to-be-determined location.