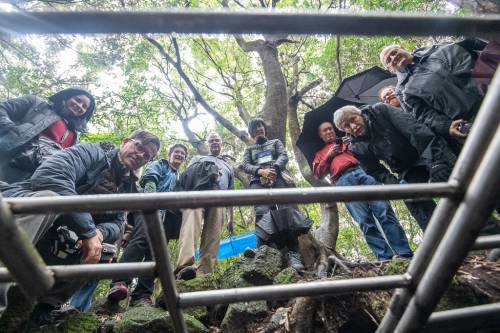 2018 Presbyterian Peacemaking Travel Study Seminar participants looking into the entrance of Seonheul Doteul Cave, where Jeju Island citizens hid, and were ultimately killed, during the April 3 Uprising and Massacre. (Photo by Gregg Brekke)

JEJU CITY, Korea — The island of Jeju off the southern coast of Korea holds a history that is tragic and painful to its residents. Located on the sea and air routes between the Pacific Ocean, Japan and China, Jeju held an important role as a port and defense position as various nation states vied for power over the Korean Peninsula.

The 2018 Presbyterian Peacemaking Travel Study Seminar made a three-day visit to the island to learn the stories of those caught in the turmoil of shifting military, colonial and national powers. Most poignant in the memory of Jeju islanders are the events surrounding what is referred to as the “April Third Uprising and Massacre.”

More than the events of a single day, “April Third” comprises a seven-year period [March 1, 1947 – Sept. 21, 1954] of human rights violations, mass killings and atrocities by the Korean national police force and military, all under the watchful eye of the U.S. military that held southern Korea as a protectorate following World War II.

To ensure peace, forces and civilian militia groups loyal to the U.S. were dispatched against their fellow citizens to root out suspected communists and their sympathizers as the United States and Russia sought influence in Korea. On April 3, 1948, a group of 350 Jeju citizens, frustrated by the ongoing oppression, took up arms against the police. Fourteen people involved in the uprising were killed.

Over 30,000 Jeju citizens were killed in the ensuing period. History has shown that of those involved in civic organizing on Jeju Island, and even the 500 people who took part in the armed uprising of April 3, very few were communists. Rather, most involved were those intent on forming a Korean government free from foreign influence that included the 35-year period of Japanese rule prior to the end of World War II.

Carl Horton, coordinator for mission with the Presbyterian Peacemaking Program, had also brought a group to Korea in 2004. Most of the memorial sites the group is visiting in 2018 were not yet established at the time of the previous trip.

“The ability for people to now tell their stories about the atrocities of the war is a new experience for us here,” he said. “We’re hearing things I never heard because they weren’t spoken about on my previous trip to Korea … But the Jeju Island massacre, the April Third events — they really bring a reality to the situation on the peninsula and the history here. And so, I think for us as Presbyterians, because we have such a connection to these denominations [Presbyterian Church of Korea and Presbyterian Church in the Republic of Korea], it is really helpful to be able to know the story. And as we’ve heard, go back and tell these stories.”

The Jeju sites were visited as part of a “Dark Tour” led by Gayoon, an activist on Jeju whose organization works to explain the events of April Third and how they relate to the broader Korean political history. Sites visited include the April Third Peace Park and massacre sites at Doteul Cave and Bukchon Village, along with other memorial sites. The group also visited the home of Jin A-young, a young mother in 1948 whose jaw was shot off during the events of April 3. She lived with her injury and the resultant complications, wearing a scarf to cover her disfigurement, until her death in 2004.

Michelle Muñiz, disaster recovery coordinator for the Presbytery of San Juan, is attending her second Travel Study Seminar, having previously visited Colombia with the program. She said the experience in Korea “feels further from home,” with a new language and much different culture, but with a shared experience of U.S. involvement.

“Last night I was sharing during our devotional time about the U.S. occupation [of Puerto Rico] and how that really hits home for me,” she said. “I can read and learn about the history of Korea but being here in Jeju you see so many things that relate to the things that I can read in my history books in Puerto Rico and the presence of the United States in my country.”

She’s eager to take what she’s learned and continue building connections with a Korean Presbyterian congregation in San Juan.