Recommendations to General Assembly due Feb. 16 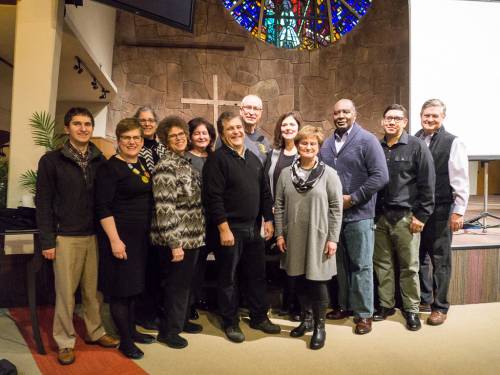 The Rev. Dr. J. Herbert Nelson, II, Stated Clerk of the General Assembly, was present for the opening of the commission’s meeting and brought greetings following his visit to the Seattle Presbytery the prior day.

“I’m convinced we are in a very significant period, not only for the church but for the world,” he said. “I have a great hope as I travel across the country … that there is a [sort of] revival in the life of our denomination. They’re figuring out ways to do things that haven’t been done before — it’s not a matter of survival, but how to thrive in the 21st century.”

Noting the commission’s overarching charge of providing structural recommendations for the denomination, Nelson said, “You are doing some of the significant heavy lifting to do the work that will help us become the church we need to be.”

He called commission members “gatekeepers,” not because they stand in the way of progress, but “because they love this denomination, they love the church” and open doors to a new future.

“We’re not dead,” Nelson said of the denomination’s outlook. “We’re not dying. We’re reforming.” Adding that communities and ministries are also reforming, he said, “You’re engaging the church in the reform that needs to be done. … You never lost your focus even as internal and external disagreements [formed]  over the nature of the commission’s work.”

Nelson concluded his comments by saying “the Lord will make a way,” encouraging commissioners to continue their work and trust in the process of the General Assembly to affirm or revise the group’s recommendations.

The majority of the commission’s work on this day was devoted to reviewing the most recent set of recommendations made by its various working groups. These suggestions will be shaped over the next month in consultation with commission members and other groups and will form the basis of the commission’s report to the General Assembly. 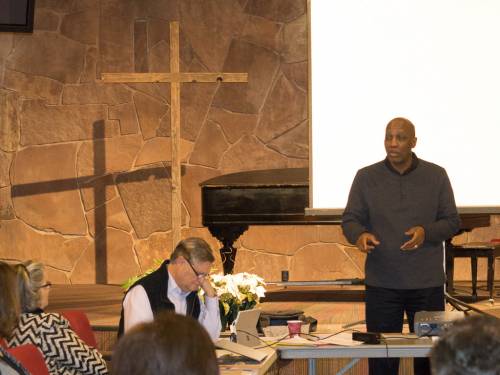 Role of the Stated Clerk

Commission member Cliff Lyda said he and others had identified a “flat spot” — namely the role of the Stated Clerk — at the group’s Chicago meeting.

“In terms of my observation, when you look at the organizational chart [of the PC(USA)] we have six agencies listed in relationship with the General Assembly, and each has equal standing,” he said. “You would see no place where you looked for leadership of the denomination. … I have the strongest conviction that somebody’s got to lead. In Reformed theology we mistrust authority, but you can do that to such an extent that you subvert and destroy leadership. Who, as a national body, leads us, speaks for us — who do we grant that face to?

Saying the working group wanted to highlight the role of the stated clerk in the denomination, “not to create a CEO or a presiding bishop,” Lyda continued, “We have entrusted to this office a leadership function that is pastoral and prophetic. … We have plenty of corporate structure, but for the pastoral and prophetic [roles], we need to identify where that sits.”

Three recommended modifications to the General Assembly Organization for Mission (chapter IV 8.2), providing definition to the role of the Stated Clerk, were proposed. They will require the six agency bylaws be amended to recognize changes including: 1) As the top ecclesial officer the Stated Clerk is to exercise constitutional and spiritual leadership, provide counsel in the time of crisis, act as the chief ecumenical officer, and speak to and for the church in matters of faith and practice unless otherwise directed by the General Assembly 2) Serves as ex-officio on the boards of all agencies with voice but no vote, including in executive sessions; consulted on agency executive leadership changes 3) Agency review committees will report to and be accountable to the Stated Clerk.

“We’re not changing our governance at all, just clarifying the role of the Stated Clerk,” commission co-moderator Eileen Lindner said.

The initial proposal of the A Corp working group asked to consider the legal entity of the PC(USA), asked that the A Corp be considered the “principle operating agency of the denomination” with a board comprised to ensure all agencies have a voice and a vote. A suggested board composition of nine members was offered, asking for one representative from each of the six agencies and three at-large members.

For the first two-year cycle, it was suggested that the at-large members of this board include a representative from the Way Forward Commission and All Agency Review Committee in addition to one person proposed by the nominating committee.

“This is going to take a measure of goodwill,” Lindner added, responding to a question about the accountability to form and implement the A Corp recommendation and acknowledging the need for concurrence with the All Agency Review committee. “But I hope our church and our assembly will say it’s time to get over our quibbles and get the job done.”

While areas for improvement have been discussed on how the national denomination works with mid councils — presbyteries and synods — no clear recommendations have emerged as of this meeting of the Way Forward Commission aside from the need for increased engagement.

Various proposals were leveled, including looking at shared funding of ministries equally important to national and mid council entities.

“This conversation is a slippery slope,” interjected Sara Dingman, the presbyter in Missouri River Valley. “I’m tired of synods being the scapegoat of the denomination. Something new is springing forth from the mid councils. … There is no single group in the denomination that has more diversity than the synod execs. It feels we are going back to the default of questioning the sustainability of the mid councils when there’s a better question that could be asked.”

“When we start with financial sustainability, we lose,” she said, adding that missional priorities rather than finances must lead the discussion.

“There will be, must be, some reconfiguration of the mid councils,” said commission staff advisor Tom Hay. “There is a place for the General Assembly to create the place for that conversation, which doesn’t exist today, that isn’t top-down. It would be an incredible gift to the whole church if this commission could provide that.” 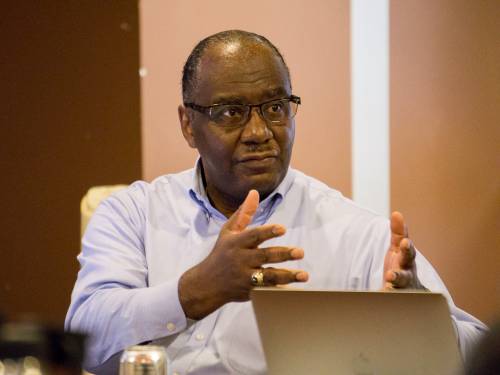 “Direct the communications leaders of the agencies (6Comm) to develop an overarching strategy for denominational-level communications; contract a national-caliber branding agency to develop a PC(USA) brand strategy, flowing from [the] Vision 2020 [team], incorporating the long-established PC(USA) seal; define a clear decision-making process and reporting structure to guide the project.”

Hay suggested crafting the recommendation to read in such a way as not to imply a single communication office, but rather that these directives would be incorporated into the communications work of each of the six agencies of the PC(USA).

Calling the work with the 6Comm group “highly cooperative and clear,” Lindner said that in cooperation with the Way Forward Commission, the recommendation takes into consideration the current work of the agencies while hoping the scope will extend to how the agencies share data about membership and giving, and working toward a consistent web presence for the denomination.

A draft of the communication recommendations will be presented to the agency leadership “Chairs and Chiefs” meeting next week, with the Way Forward Commission hoping to receive the endorsement of their proposal.

“It’s important the Way Forward Commission presents this [recommendation] to the Chairs and Chiefs saying we think this work is important to the future of the church and we want your support,” Lindner said.

“The work of inclusion and equity is sort of splattered in various places,” commission co-moderator Eliana Maxim said of the denomination’s diversity efforts. “There’s no strategy or coordination, and that’s reflected in our work.”

“The only official recommendation we want to make to GA is around translation services,” she said. “The ethos of how to become more inclusive, more diverse will be part of our ongoing work and related to recommendations we’ll make around the position of Manager of Diversity and Inclusion, currently staffed by Samuel Son.”

Hoping this position will be funded through 2022, Maxim asked that the position be given the responsibility and authority to work with the six agencies to complete the race audits they were asked to complete by General Assembly 222 (2016).

Noting that “so much of the work of diversity is around provided resources for people they see in the pews,” she said, “the reality is we can’t be thinking about producing materials for who already exists, but who we want to reach.”

Maxim said changing the language and directive to “inclusion and equity,” instead of diversity, better portrays the focus of the diverse voices working group and highlights aspects of justice.

Although originally part of the workgroup’s focus, discussion of expanding translation services for the denomination has been moved to the proposal to be made regarding shared services.

Questions remain for the recommendation regarding the cost for these additional services, including an expanded shared services translation group, and the role of shared translation services for the Presbyterian Publishing Corporation and Board of Pensions.

Finding the theological roots of shared services in 1 Corinthians 12, “There are various kinds of gifts, but the same spirit that distributes them,” the commission emphasized the importance of those serving the church in these roles. The theological statement from “Workgroup A” reads:

“The value of shared services in the PC(USA) exists when all agencies, carrying out their respective missions as directed by the General Assembly, collectively best serve the church with excellence, transparency and efficiency. Simultaneously, sharing any services must be accomplished without harming the safety, soundness, well-being or missional goal of any individual agency.”

Looking at tactical areas, a statement from “Workgroup B” reads, “the following five functions represent the best areas for immediate collaboration and review of outsourcing opportunities.”

Other administrative services such as human resources, research services, communications, marketing and outreach, and mission engagement and support were considered for collaboration or consolidation, and while they were not ruled out for further consideration, those services did not make the list for immediate deliberation.

It was proposed that implementation of the initial five services would be phased in as analysis of those areas most likely to provide the greatest cost savings and efficiencies for the denomination. 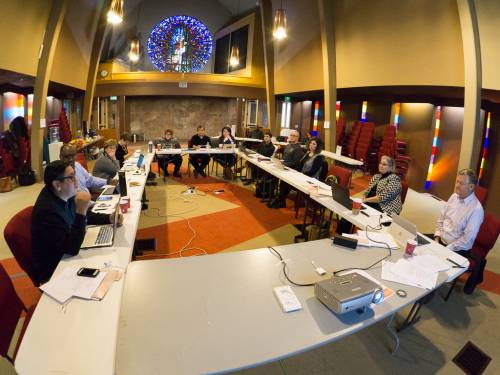 Two areas of continuing collaboration were updated, and no further recommendations were made.

The Presbyterian Mission Agency, Presbyterian Foundation and Investment and Loan Program (PILP) are working together to consolidate and expedite the Church Loan Program. Intended to help churches with new building projects, the application and approval process of the program will be administered by PILP, utilizing its expertise in loan management.

Congregational Ministries Publishing of the Presbyterian Mission Agency and Presbyterian Publishing Corporation (PPC) are nearing completion of an agreement made by the groups last fall to consolidate publishing services under PPC. Although the transition was to be completed on Jan. 1, 2018, agreement on transition details has prevented the full transfer of personnel and work to PPC.

Funding of the national church

The commission engaged in a discussion of how the mission of the national church is funded and the changing culture of per-capita contributions, designated giving and other funding sources. Though they don’t expect to make a recommendation on changing the current mechanism for funding the national church, continued analysis and conversation will be suggested.

Discussion of the report format

A preliminary report outline was presented by the commission. Working groups will combine their efforts to fill in the details of the report as it will be delivered to the General Assembly.

The Way Forward Commission continues its drafting work tomorrow (Thursday, Jan. 18) with a discussion of the above outline and the ways that working group recommendations will be combined to form the complete report.