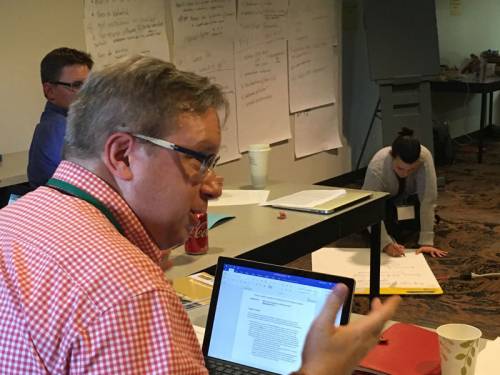 The Rev. Charles “Chip” Hardwick engages in conversation with PC(USA) camp and conference center executive directors and other Presbyterian leaders regarding the future of their ministries for Christian formation. (Paul Seebeck)

If you’ve found yourself asking those questions, you’re in good company.

Leaders from camp and conference ministries in the Presbyterian Church (U.S.A.) and the Evangelical Lutheran Church in America recently grappled with those questions at the Heartland Center, a PC(USA) camp and conference center only 20 minutes north of Kansas City International Airport.

After 48 hours of work, the PC(USA) camp and conference executive directors met with key Presbyterian denominational leaders, sharing what they envisioned for their future.

“We looked at facts from research that shows that our ministry has a vital role to play, particularly in relationship to Christian formation,” said the Rev. Betty Angelini, executive director of Living River: A Retreat on the Cahaba in Alabama.

“It helped us realize that together we are mission with camps, not camps that happen to have a mission.”

Presbyterian Research Services has found that the spaces that camps provide are the primary setting for the spiritual growth of pastors — and for Christian young adult leadership development. Recently a National Study of Youth and Religion (NSYR) on camp ministry’s impact confirmed that Presbyterian finding on a much broader scale.

The NSYR studied more than 3,000 young people, in three waves, which began when they were 13–17. The study revealed that:

“We learned that 10 million children and youth attend camp in the U.S. every summer,” added Angelini. “There’s a huge potential number that we can have an impact on.”

According to Jason Brian Santos, Presbyterian Mission Agency (PMA) coordinator for Christian formation, young people struggle to fit their spiritual experience at camp into what they are experiencing in the life of their church. “Church — youth and collegiate ministry — are great, but we can’t do it alone,” said Santos. “We start integrating these experiences by using your spaces for Sabbath and intergenerational connectivity. What would it mean if your ministries became the place for Christian formation in our denomination?”

Camps and conference centers that are “centers of excellence” are living into this new way of thinking. They are moving from the image of old, institutional summer camp where people sang “Kumbayah” by the campfire, to places of Christian identity formation.

These are a few examples:

The moderator of the Way Forward Commission of the PC(USA), Mark Hostetter, encouraged those gathered to think about what camp and conferences ministry might look like “if they were places that provided new Christians to the denomination.”

“Millennials want to make a difference in the world,” he said. “What is it that will draw them and others to us, and these places, in service and mission? And then, how do we support this at a grassroots level from the national denomination?”

According to Brian Frick, PMA associate for Camp and Conference Ministries, the “centers of excellence” are part of a growing number of healthy, innovative centers. Despite some earlier decline, many smaller camps have moved to sustainability in the last three years.

“Things are beginning to turn; there is some light now,” said Frick. “As we do our advocacy and liaison work at the national level with our synods and presbyteries, let us continue to transform our places into mission and ministry spaces for Christian formation, on behalf of the church, for the world that God loves.”

Youth, young adult, and camp and conference ministries are part of the Theology, Formation and Evangelism ministry in the Presbyterian Mission Agency.