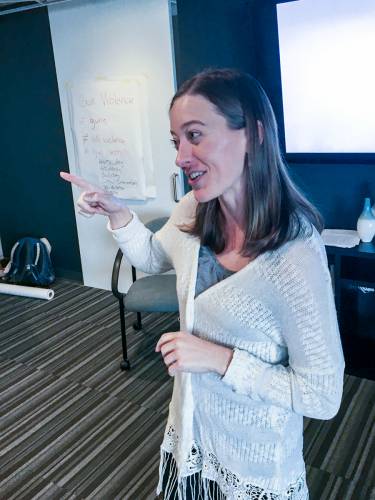 Sarah Logemann addresses questions about the gun violence curriculum she wrote for the collegiate ministry network of the Presbyterian Church (U.S.A.) (Photo courtesy of Tammy Wiens)

Years in the making, the gun violence curriculum will help collegiate ministry leaders address an issue that has become increasingly difficult to talk about.

“When I became the National Director of UKirk Ministries in 2014, I asked campus ministers ‘What resources are lacking?’ What issues do you need help with on campus?’” said the Rev. Dr. Jason Brian Santos.

“It soon became clear that the three most pressing issues across the country were suicide, sexual assault and gun violence.”

Two years later, Santos — now the coordinator for Christian formation in the Presbyterian Mission Agency (PMA) — was talking with a colleague, Sarah Logemann, about a curriculum writing internship in the office of Collegiate Ministries.

Santos considers that conversation “a God moment,” where “everything fell into place.”

Logemann, an MDiv student at Princeton Theological Seminary, was looking for an internship. She’d grown up in Littleton, Colorado — the backdrop of one of the deadliest school shootings in 1999. Santos recognized Logemann had a unique perspective on gun violence and that it was close to her heart.

Although she was a student at another high school when the Columbine High shooting occurred, the trauma rocked Logemann’s adolescent world. She remembers how grateful she was to be part of a faithful Christian community that was willing to talk not only about what happened in Littleton, but why.

“We discussed the systemic issues and the social responsibility we had as Christians to openly engage the topic of gun violence,” she said.

In June 2017, as a PMA intern, Logemann began her task of researching, developing and writing a four-session study to address the theological issues related to gun violence and how campus ministries might respond in the face of tragedy.

Drawing insight from conversations with Presbyterian Publishing Corporation (PPC), including Congregational Ministries Publishing which is now a part of PPC, and various offices in Compassion, Peace and Justice, she carefully designed the curriculum, with the college ministry context in mind where ideas are peddled and traded like wares.

“In this ‘marketplace of ideas’ environment, collegiate ministries becomes the ideal place to talk about controversial issues,” Santos said. “It is imperative that we have a safe place for young adults to do this.”

For Logemann, communications was a central but often overlooked element in the issue of gun control and gun violence, especially because the word “gun” immediately puts people on the defensive.

“Part of the goal of this new curriculum,” she said, “is to get participants to identify not just what they believe about guns and gun violence, but why.”

Late last year, as the curriculum was near completion, the Rev. Dr. Tammy Wiens, associate for Christian Formation at the PMA, drew together a small pilot group to workshop the study. Surrounded by a small group of campus ministers, college students and PMA staff, Logemann guided the group through each lesson, listening and responding to their feedback.

One of the most notable facets of the curriculum for that group was how it was designed.

The gun violence curriculum is patterned after four key elements in reformed worship: to gather, to encounter God, to respond — and then to be sent into the world to make a difference.

Using this framework, campus ministry leaders will be able to guide students through a critical theological reflection on gun violence in the context of hearing God’s Word and responding to Christ’s call.

“In the rhythm of worship we are reminded the gun violence topic is more than just political debate or sociological research,” Logemann said. “It allows us to encounter that which is mysterious and bigger than ourselves.

“It puts us in a place of humility and eager expectation for an encounter with the living God. Worship reorients us to who we are and who God is — and how we should respond.”

The Presbyterian Church (U.S.A.) has done some very helpful work on the topic of gun violence. A 2010 resolution, “Gun Violence, Gospel Values: Mobilizing in Response to God’s Call,” was adopted by the 219th General Assembly.

In addition to this policy, the PCUSA helped produce a documentary and study guide (Trigger: The Ripple Effect of Gun Violence), and the Presbyterian Peace Fellowship recently released the Gun Violence Prevention Congregational Toolkit.