LEXINGTON, Kentucky — Oct. 17, the Rev. Brooke A. Scott was ordained and installed as the pastor at Church on Main, a Presbyterian congregation in Middletown, Delaware. A week later, the church was the target of some Twitter trolling by another pastor because of the Black Lives Matter and LGBTQIA+ Pride flags displayed on the front of the church.

“If you’re headed to visit a church this morning, and you see this, keep driving. It’s not a church,” tweeted Pastor Virgil Walker of G3 Ministries, who was in Middletown for a conference at another church.

The tweet generated both agreement and pushback, including from Christian musician Derek Webb, who replied that the flags are “like the fruit on the tree” and “any ‘church’ that doesn’t radically welcome, celebrate, defend, and amplify the bodies, voices, and breath of marginalized people is no church.” 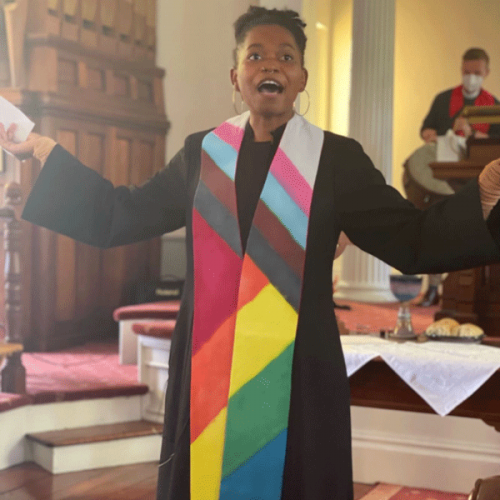 The Rev. Brooke A. Scott speaking at her ordination at Church on Main in Middletown, Delaware on Oct. 17. (Photo courtesy of Church on Main)

“This was not my goal to have this happen, so soon, and early into the call,” Scott said in an interview. “This is a church that made these commitments before I even came in. But it just came my way, and all I feel like I’m called to do is to not even respond to the criticizers directly, but to just reiterate what our commitments are, and what I see in this community and in their heart, and to lift that up whenever I can.”

This is not the first time that Church on Main has received pushback against its public support for Black lives and the LGBTQIA+ community. Like many churches with similar displays, in the summer of 2020, Church on Main had its Pride and BLM flags vandalized. Scott, who is Black and part of the LGBTQIA+ community, said the strength and resilience of the congregation was a key part of the response to the attack. 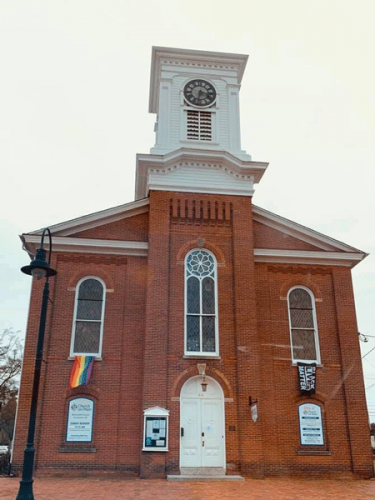 Church on Main in Middletown, Delaware, was criticized on Twitter by another pastor for its LGBTQIA+ Pride and Black Lives Matter flags. (Photo courtesy of Church on Main)

In addition to supportive social media messages, Scott says the church has received direct messages of support and donations from people who have heard about what happened. And the Middletown congregation and Scott are undeterred, saying it is important to continue amplifying these messages, which are in line with Presbyterian Church (U.S.A.) policy.

“This type of display is very important in this day and age and in the society where we are now,” Scott said. “There’s a part of the gospel that asks us to walk alone in a lot of ways, to give a message that even our own siblings in Christ are not going to agree with, are gonna oppose us, and that when you take a stand for justice, resistance is something that happens. We’re in great company. All the great leaders and revolutionaries, during their time, told a message that came with a lot of resistance.

“Part of the Christian life is living with a lot of courage and living with a lot of understanding that we’re going to sometimes take the less popular road and at least in the company of Christianity, we have to take care of each other because it’s hard, and it’s scary, but that’s all a part of it.”

You can see our full interview with the Rev. Brooke A. Scott in the video at the top of this story.