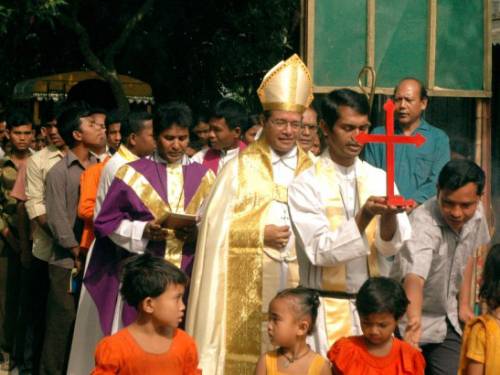 Many years ago, a PC(USA) mission co-worker in Bangladesh, the late Norman Miller, recognized God’s call on a young Paul Sarker’s life and told him about assistance available through the PC(USA) for theological studies. Bishop Sarker earned a Master of Theology degree at Louisville Presbyterian Theological Seminary in 1998. (Photo provided)

LOUISVILLE — The Most Rev. Paul S. Sarker, moderator of the Church of Bangladesh and Bishop of the Dhaka Diocese, visited the Presbyterian Center recently to celebrate the first 25 years of formal partnership between the Presbyterian Church (U.S.A.) and the Church of Bangladesh (CoB). The visit also provided an opportunity to discern God’s direction for the future of the partnership.

When the PC(USA)-CoB partnership began in 1992, efforts focused primarily on supporting community health programs, hospitals and nursing schools. Through the years, the partnership blended in social development and spiritual work as well within the Muslim-majority context. The CoB has revised its Social Development Program and given it a new name, Shalom — dedicated to the promotion of love, justice and peace.

The main challenges facing the CoB are the country’s oppressive poverty, inequality in accessing resources, population growth, the church’s self-reliance and a growing need for interfaith dialogue to combat radicalism and persecution.

With religious minorities — Hindu, Christian, Buddhist and others — making up less than 10 percent of the population of Bangladesh, and with about one percent Christians being further divided into as many as 80 denominations or sects, faith is at the heart of all mission and ministry in the CoB, including the development of the church’s new logo.

“Slowly, slowly, I developed this logo idea,” Sarker said, pointing out the design’s circular CoB acronym, outlined in red on a green background, symbolic of the country’s national flag. A water lily, the national flower of Bangladesh, grows at the foot of the cross, as a reminder that God’s call to mission should reflect and reveal Christ within the context of Bangladeshi culture. The cross signifies the liberating sacrifice of Christ and the union of a cross-bearing life in liberating self and others. To the left of the cross are two words, Witnessing Christ, which is the goal of the church.

“We show Christ to people of all religions through our programs,” Sarker said.

The CoB, a member of the World Council of Churches, works with congregations and community groups to promote holistic development for disadvantaged and vulnerable people of Bangladesh, regardless of race, religion, gender, age or background. The church advocates for and works alongside people affected by poverty and injustice, empowering them to work together to claim their rights as human beings. 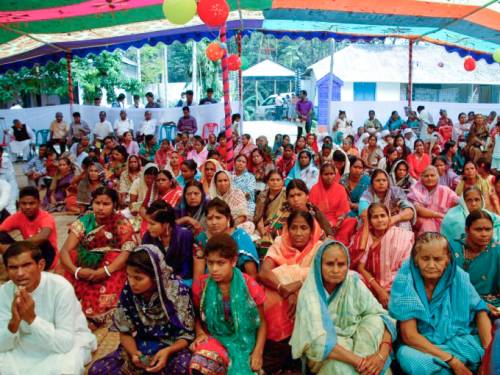 In the Church of Bangladesh Barisal Diocese, the Jobarpar Deanery’s annual revival meeting welcomes people of religions other than Christianity who come to ask for prayer. Through these prayers, many have received consolation, hope and healing. Each of the six CoB deaneries hosts an annual revival meeting open to people of all faith backgrounds. (Photo provided)

Through programs to help people improve their health, education, well-being and livelihood and by living out the gospel, particularly among tribal groups, the CoB has been able to reach marginalized indigenous people and start 13 to 15 new tribal churches, Sarker said.

The Christian mission also reaches Muslims; however, Muslims who have converted to Christianity still feel intense cultural pressure to externally continue Muslim traditions. Yet, they say, “I am a Christian in my heart.”

“The current situation of our world is challenging, to say the least,” said Mienda Uriarte, World Mission area coordinator of the Asia-Pacific region. “As I listen to Bishop Sarker talk about the trials and stresses confronting the Church of Bangladesh, I am impressed as he calmly re-emphasizes the need for all of us to establish and nurture the relationships with our neighbors in the communities where we live. By doing so, this will also bring growth to the relationships we seek to nurture in the communities of faith where we worship.”

The liberation war with Pakistan in 1971 resulted in a free and independent Bangladesh and the creation of the CoB, made up primarily of churches with historical roots in Anglican and English Presbyterian mission efforts. The CoB has three dioceses, which are located in the capital city of Dhaka, in central and northern Bangladesh; Kushtia, in the western part of the country; and Barisal, a new diocese in the southern part of the country, established this year.

Bishop Sarker was elected moderator of the CoB in 2007 and, after Bishop Michael Baroi’s retirement in 2009, he was transferred to the Dhaka Diocese. 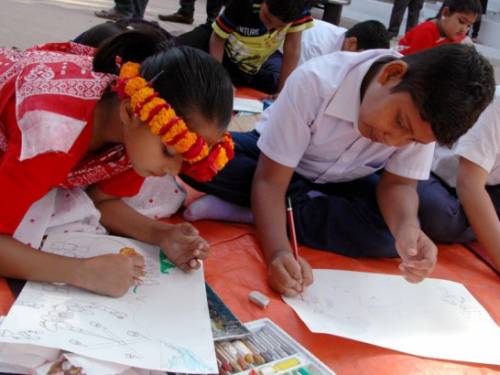 Quality education programs from pre-primary through high school are a priority area of the CoB. (Photo provided) 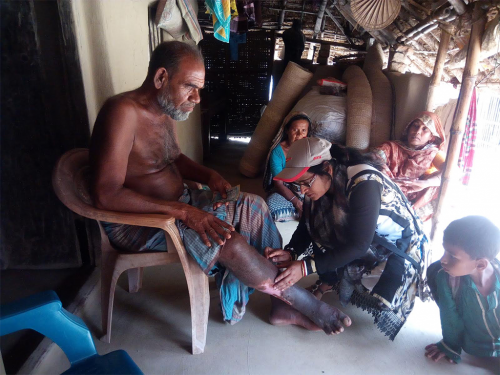 Through its community health programs, the Church of Bangladesh, a partner church of the PC(USA), is nurturing the healing ministry of its congregations, development projects and hospitals. The healing ministry of the CoB provides treatment for leprosy patients in very remote areas of the country. (Photo provided) 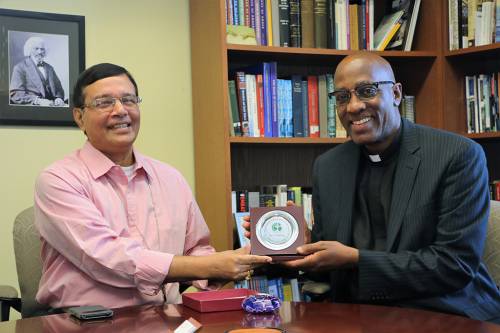 The Most Rev. Paul S. Sarker, moderator of the Church of Bangladesh and Bishop of the Dhaka Diocese, presents a special gift to Stated Clerk the Rev. Dr. J. Herbert Nelson, II to celebrate 25 years of partnership between the CoB and PC(USA). (Photo by Tammy Warren)