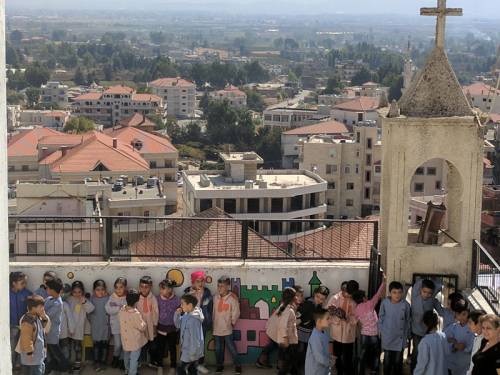 Young Syrian refugees, some of whom are attending school for the first time, are getting a chance to learn to read and write in Arabic and English. The National Evangelical Synod of Syria and Lebanon (NESSL) Education Center for Syrian refugees is in Kab Elias, a town in the Bekaa Valley of eastern Lebanon. Photo by Philip Woods

BEIRUT, Lebanon – The National Evangelical Synod of Syria and Lebanon (NESSL) shares with the Presbyterian Church (U.S.A.) not only its deep faith in Jesus Christ, but also a connection to the reformer and insightful theologian John Calvin, who had a special heart to reach God’s people from all backgrounds with the multifaceted gospel message.

Our deep historical partnership in the gospel goes back to the 19th century, when the Middle East was at a crossroads and spiritual, biblical, educational and medical needs were extremely huge in Syria and Lebanon.

Protestant missionaries from the U.S. came and founded not only churches but also universities, schools and hospitals, and brought the printing press to Lebanon so that the entire Bible could be available in Arabic.

The NESSL-PC(USA) partnership has been proven through its continuity, particularly during times of wars and conflicts in the Middle East and especially in Syria seven years ago. These merciless wars have left a miserable trauma on the people and have resulted in destruction and hundreds of thousands of deaths. War has created a crisis of displaced people — Syrian refugees, totaling around 9 million in and around Syria and another million in Lebanon.

The response of our PC(USA) partners to join together in fulfilling great needs during conflict is appreciated. Together we supplied our churches in Syria and Lebanon and our people from different religious and ethnic backgrounds with food baskets, fuel, medical assistance, school assistance, water and sanitation, generators, funds for renting or repairing houses and other items. 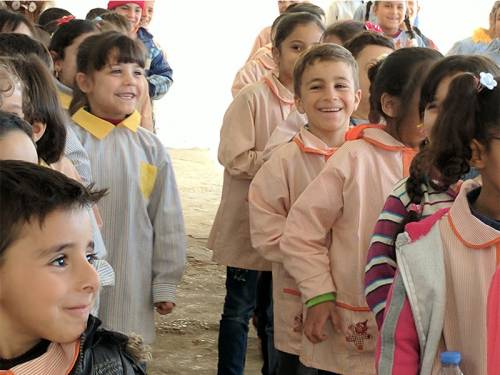 The education ministry of the National Evangelical Synod of Syria and Lebanon (NESSL) is tailored to meet the needs of Syrian refugee children in Lebanon. The children attend school five days a week, where they study English, Arabic, mathematics and science. Each school day also includes a hot meal and Bible content with an emphasis on ethics and morality. Photo by Philip Woods

Perhaps the most pioneering project the PC(USA) has partnered with NESSL in is a special ministry of education and learning of Arabic, English, science, mathematics and biblical values to 630 children of Syrian refugees living in camps and tents in Lebanon. The majority belong to religions other than Christianity.

The educational ministry partnership began in March 2015 and has grown to six centers in regions of Lebanon. These centers offer love, respect, daily meals, and spiritual, psychological, social and medical help. This unique ministry is making a great transformative impact, not only on the lives of the students but also on their parents. In appreciation of this ministry, one parent said, “We thank you because this is the first time we feel we are dealt with as real humans and not unnoticed numbers.”

John Calvin envisaged God`s ministry to all of the people of the globe because all are created in God’s image and likeness. If you think that a needy person is worthless and doesn’t deserve your efforts, remember that the Lord`s beautiful image in him makes it worthy to give him yourself and your possessions. If you think you are not obliged to help him, remember that the Lord put you in your comfortable situation so that you may realize the many blessings of the Lord on your life.

The Rev. Souheil Saoud is the executive secretary of the Educational and Social Services Committee of the National Evangelical Synod of Syria and Lebanon (NESSL). This article originally appeared in the Summer 2018 issue of Mission Crossroads magazine, which is printed and mailed free to subscribers’ homes within the U.S. three times a year by Presbyterian World Mission. To subscribe visit pcusa.org/missioncrossroads.

Make a gift to support varied ministries of the National Evangelical Synod of Syria and Lebanon (NESSL): pcusa.org/donate/E340202