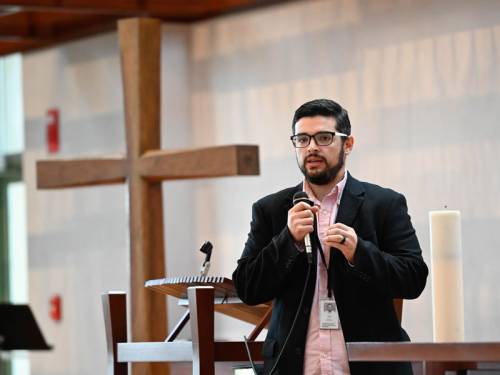 Juan David Correa, a refugee from Colombia who’s now a translator and copy editor for the Presbyterian Publishing Corporation, shared stories from his younger days during worship Wednesday, a day ahead of World Refugee Day. (Photo by Rich Copley)

LOUISVILLE — A day ahead of World Refugee Day, worshipers during the Chapel service at the Presbyterian Center heard a personal story from a refugee among them.

Juan David Correa, a translator and copy editor with the Presbyterian Publishing Corporation, led worship in part by tracing his life story as a boy whose family fled the violence in Colombia when he was 12, gained Canadian citizenship and, ultimately, life in the United States with a wife and three children.

While he was growing up in Colombia, Correa’s family suffered violence at the hands of the Revolutionary Armed Forces of Colombia (FARC), which assassinated family friends and killed his family’s livestock. Conflict and violence were so widespread over the decades that they became normalized, he said. “We (Colombians) are the only people who can watch the news and eat lunch at the same time,” he said.

His family settled in the U.S., but in 2004 received a letter ordering their deportation. “What did we do wrong?” he wondered. “Refugees crave acceptance. Our worst nightmare is to be kicked out.” 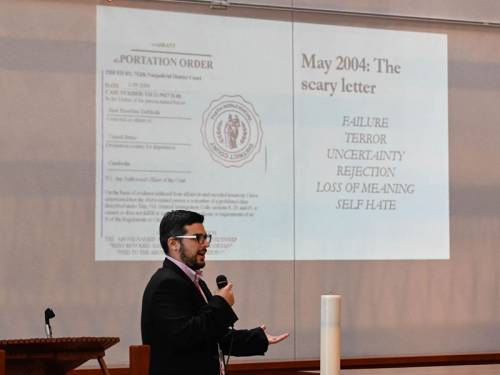 The Correa family’s deportation order arrived in 2004. “What did we do wrong?” a young Juan David Correa wondered. (Photo by Rich Copley)

“We had never lived in the peace that we lived in this country,” he recalled. “When you walk the streets in Bogotá, all you do is look to the back and to the sides. Here I can drive and blast my music in downtown Louisville and think I’m the best without fear of anything.”

The U.S. immigration system “failed us, but we obeyed. We left the country” and headed to Canada, where he gained citizenship.

He remembers how it felt to be undocumented in the U.S.

“We are people with dignity. Our meaning goes beyond documentation, because we have potential within us,” he said. “Refugees want to keep writing the American story, through education and opportunities, through friendships and common faith. We are not here to change American customs. We are thankful for what saves us and gives us peace.”

Correa said he saw both good and bad as a boy in this country. A good Samaritan repaired the Correa family car when it broke down in rural West Virginia. An immigration judge “treated my parents like garbage in front of their children, calling them liars,” he said.

He’s now a permanent U.S. resident whose children were born in Louisville.

“I invite you to look at refugees as people with stories and potential,” he said. “When you meet them at church or at a social event, maybe you can ask them, ‘Can you tell me your story?’”

He closed worship with a quote from Santa Laura Montoya, who fought for the rights of Colombian women and native Indians. Here’s what the nun once told her Savior: “My Jesus, there are two who are thirsty: You of souls, and I of satisfying your thirst. What is stopping us then?”

Observed annually on June 20, World Refugee Day is a time for remembrance, prayer, celebration and commitment. An estimated 22.5 million people around the world are refugees, having fled countries including Syria, Iraq, South Sudan, the Democratic Republic of Congo, Venezuela, El Salvador, Honduras and Guatemala.