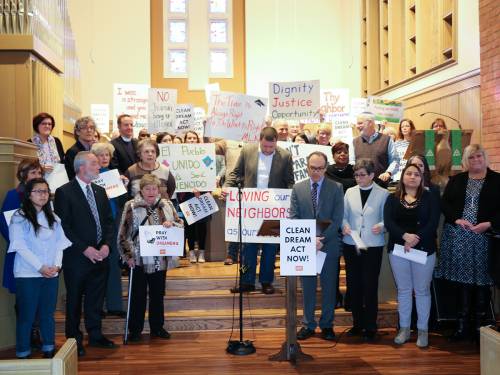 Last September, President Donald Trump gave Congress until March 5 to pass legislation replacing the Deferred Action for Childhood Arrivals (DACA) program before it ends. Immigrants who were children when they came to the U.S. face deportation if Washington cannot agree on a solution. Approximately 800,000 people are covered by the program.

“The faith leaders are really concerned about what’s happening with these young folks. We see people being deported and/or living in fear of being deported and it’s so unnecessary and tragic,” said the Rev. Jeff Paschal, pastor of Guilford Park. “We wanted people to have a better understanding of the issue and we hope to influence legislators with the press conference. Our real hope is a clean DREAM Act that works toward comprehensive immigration reform.”

“Our faith teaches us to welcome the stranger and protect the weak as Jesus spoke of in the book of Luke,” said Paschal. “These young people really don’t know any other country than the U.S. and they’re being sent back to places they really don’t know, placing them in danger. It’s a disastrous policy and we pray for a change. It’s time that we, as a country, be wiser and kinder.”

The news conference was organized by Melanie Rodenbough, an elder at Guilford Park and board chair of FaithAction International, a nonprofit organization in Greensboro that works to help the immigrant community.

“We wanted to provide education on this issue because we have a significant number of immigrants in this area,” said Rodenbough. “In my work, we have come into contact with several undocumented immigrants as clients and got to know some of them and see them in their family life and learn about their hopes, dreams and fears.”

Rodenbough referred to a young immigrant woman in her 20s with two young children, who has worked with FaithAction on behalf of immigrants and has made a productive life for herself and children.

“With tears, she told of putting her 7-year-old daughter to bed, telling her that it was possible that she would wake up and her mother would be gone,” said Rodenbough. “That is heartbreaking, that two children could lose their mother. She could literally be plucked off the street or at her home and placed in a detention center in Georgia the next day. That center is a hellhole of misery, human degradation and sorrow.”

Rodenbough says the woman is an example of many immigrants who came to this country as children and have grown up to be productive citizens in their communities.

“Those consequences are outrageous for the mistake of coming into this country without documentation. It would destroy a family by incarcerating and then banishing a person who has been here since childhood,” she said. “She’s done nothing but contribute. I don’t think that is fair and just in any shape or form.”

Both Paschal and Rodenbough say they are not optimistic for a positive outcome right now, but will keep working for a clean DREAM Act.

“We have a faith leaders’ council in Greensboro that brings together mainline pastors, rabbis and Muslim representatives,” said Paschal. “The church will continue to talk about it and hope to influence legislators. We are encouraging church members to reach out, urging lawmakers to support policies that are humane and consistent with our understanding of the Christian faith and what Jesus would have us do.”

The action in Greensboro is being applauded by the PC(USA)’s Office of Public Witness in Washington, D.C.

“We were excited that faith leaders were willing to take additional action. Guilford Park is very involved with immigrants and DREAMers. The event in Greensboro provides direct connection to our national strategy,” said Nora Leccese, associate for Domestic Poverty and Environmental Issues with the Office of Public Witness. “We were able to use our connections with senators and coordinate with grassroots folks on the ground, to send a clear message to North Carolina Senators Thom Tillis and Richard Burr, that the PC(USA) and interfaith community stands with DREAMers and we need them to have clear path to citizenship and protection.”

More information and resources are available at pcusa.org/immigration.