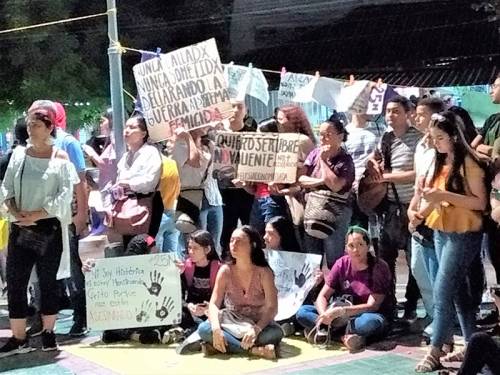 Demonstrators in Barranquilla on the International Day for the Elimination of Violence Against Women, Nov. 25, 2019. The sign in the center reads, “I want to be free, not brave. No more harassment or abuse.” The one on the bottom translates: “I’m neither hysterical nor menstruating. I shout because we are being MURDERED.” And on the top left: “Never silent, never submissive, declaring war on the femicidal system.” (Photo by Sarah Henken)

BARRANQUILLA, Colombia — There were tears in her eyes, as I’d expected there might be, and also an expression that seemed to say, “Thank you,” as her gaze met mine. Thank you for giving voice to the pain and injustice, for naming the complicity. Thank you for seeing me.

She was the one person in the room who I knew would resonate with the words in her own flesh, echoes of violence she survived in her youth. But statistically I know many others most likely felt the shadow of violation in a terribly intimate way, too. According to a 2010 survey, nearly 75% of Colombian women have experienced gender-based violence. Over 24,000 sexual violence cases were filed in 2018, the highest number in the past 20 years. This is why I needed to speak.

“Shalom, my friends,” I said. “My name is Tamar. Perhaps you’ve heard of me. I’m King David’s daughter, the only one named in the Bible. I have sisters, of course, but I’m the one our brother, the first-born heir, chose to rape.”

We were in the middle of a worship service put together by students in the School for Nonviolent Action organized by DiPaz, an ecumenical platform of Colombian churches and faith-based organizations that coordinates efforts to promote the peace process and accompany vulnerable communities. I’d had the privilege of teaching the groups that meet in Montería, Cali, and Apartadó, and now we were in Barranquilla in a session on creative liturgy for nonviolent action.

I had given them the theme of sexual and gender-based violence and said I would bring the message based on 2 Samuel 13. So after gathering in song and prayer, I invited my listeners to join me in a critical reading of Tamar’s story, interspersed with questions and observations from what I imagine to be her perspective.

In the story, Amnon is the rapist, but others supported or even encouraged his abusive obsession. First his crafty cousin Jonadab comes up with the plan, then his father, the king—fresh from his own scandal of sexual violence and murderous plotting — goes along with the questionable proposal and sends his virgin daughter to the private quarters of her half-brother who wants her to hand-feed him. A collection of servants follows orders and abandons Tamar to Amnon’s twisted plot; we might sympathize with them, given the power dynamics at play, and the likely cost of disobedience, and yet, they could have made a different choice. One of them even remains within earshot, and promptly answers Amnon’s summons to show Tamar the door.

In the entire story, Tamar herself is the only one who speaks with wisdom and justice, laying out multiple arguments to dissuade her attacker from breaking the codes of their people and destroying her future prospects, but to no avail. After surviving the rape, Tamar goes out in loud lamentation, only to be betrayed yet again, this time by her brother Absalom.

When Absalom sees Tamar in distress, he immediately knows what must have happened and who was responsible. It would appear that Absalom had noticed something off about Amnon’s interest in Tamar, but did nothing to stop it. And now he tells Tamar to keep silent, while he privately plots revenge. King David gets angry when he hears what happened, but not angry enough to punish his son in any way.

Father Richard Rohr reads Dom Hélder Câmara’s teaching on the “spiral of violence” in light of traditional Catholic moral teaching, and writes, “If we don’t nip evil in the bud at the level where it is legitimated and disguised, we will have little power to fight it at the individual level.” King David’s own actions set a precedent for allowing the powerful to follow their disordered desires, even when they lead to sexual predation. How can he hold his son to account for crimes so similar to those he himself committed with impunity? And so, the violence continues.

Zero justice for Tamar. Zero restitution made by Amnon. The shroud of complicity, the failure to assume responsibility, leads finally to Amnon’s death, struck down while drunk by Absalom’s servants. The text ignores Tamar’s needs, hopes, and future in the wake of the attack. This cycle remains disturbingly familiar in communities today, all around the globe. 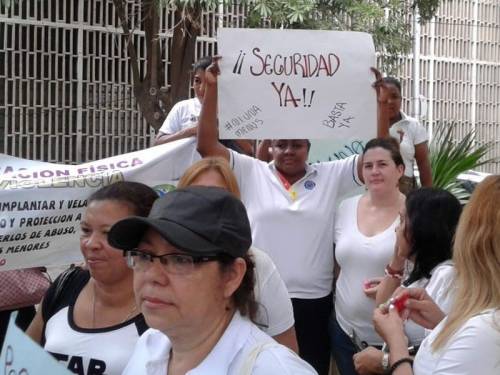 In Barranquilla, the local Presbyterian women’s ministry participates actively in actions of protest and advocacy to end gender-based violence. The International Day for the Elimination of Violence Against Women was commemorated this year with marches and dramatic presentations that emphasized the importance of consent and agency in romantic relationships, especially for women. Most of the participants were university students of varied gender. Older women issued an invitation to an intergenerational working group on gender equity. The common call was simple: we want all women to live free from violence, harassment and fear.

From the pages of scripture, I hear Tamar calling out, urging us to action. “There is no healing in my story,” she says, “only death, disgrace, oblivion. But your stories are not yet finished.

There is time for you to rewrite the script. Speak out when you see something wrong. Don’t silence the voice of the victims. And teach your children, by word and example: that they are never entitled to touch someone against their will, and that their bodies are their own; that lust and love are not the same; and that it’s always the right time to admit our mistakes and start again on a better path.”

Gender-based violence continues, but today it is met with unflinching outcry. Growing numbers of people are raising their children to be free from restrictive gender norms, and there are churches around the world that affirm women’s gifts and leadership in ministry. Reading the signs of the times, it seems we may finally be learning those lessons from Tamar’s story. I give thanks for the many women and men who have been working for generations to shift the distorted power dynamics that paint the masculine as superior to, and dominant over, the feminine. And I thank you, too, for supporting me in this call to teach, to listen, and to walk alongside my Colombian sisters in paving the way for justice and peace.

The Rev. Sarah Henken, an alum of the Young Adult Volunteer program, serves as peace initiative promoter with the Presbyterian Church of Colombia and as site coordinator for the YAV program in Colombia. Subscribe to her letters. Download her prayer card.