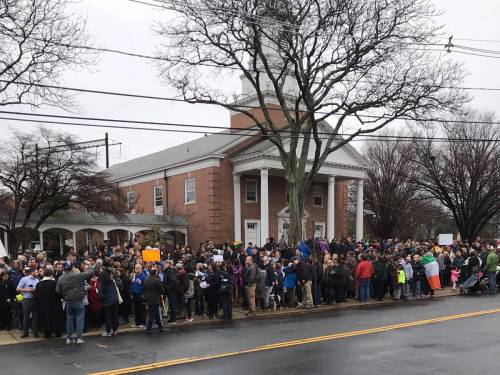 More than 500 people gather at First Presbyterian Church in Metuchen, New Jersey, to voice opposition to the arrests of immigrant Christians for possible deportation. (Photo by Justin Karmann)

LOUISVILLE — First Presbyterian Church of Metuchen, New Jersey, is seeking the release of an Indonesian Christian member who was picked up last week by Immigration and Customs Enforcement agents. Roby Sanger was dropping his daughter off at middle school when the agents approached and took him into custody. He now faces deportation.

“Roby came to this country in 1995 and was seeking asylum along with 200 other Indonesians. They didn’t know there was a one-year window to apply for asylum,” said the Rev. Justin Karmann, associate pastor at First Presbyterian. “If you miss that window, you lose your opportunity and he didn’t know it, none of the immigration lawyers really knew it, so being a person in a new country they completely missed that window.”

Karmann says Sanger wanted to do the right thing and follow federal guidelines for immigrants in this country.

Last Thursday, Sanger and two other Indonesian Christians were approached by agents. Gunawan Liem, who lives in Piscataway, was also arrested while taking his child to school. The third man, Harry Pangemanan of Highland Park, was able to seek sanctuary at a nearby church before he could be taken into custody. ICE says the agents had orders of removal from an immigration judge. Sanger, who is a longtime member of First Presbyterian Church, fled Indonesia to avoid religious persecution.

“Roby Sanger joined our church in 1996,” said the Rev. Ellen Clark Clemot, senior pastor at First Presbyterian. “He and his wife worship every Sunday here, they raised their daughters in our church and are active members of the congregation. Every one of us at First Presbyterian Church is seeking Roby’s release because he is a member of our family. He belongs here.”

On Sunday, more than 500 people gathered at First Presbyterian for a prayer vigil in support of Sanger’s release. 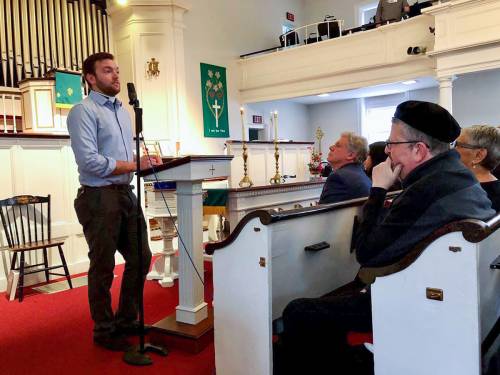 The Rev. Justin Karmann speaks during a gathering of more than 500 people opposed to the arrests of Immigrant Christians. (Photo provided by Justin Karmann)

“There was standing room only for those that crowded into the sanctuary. It was amazing. The church, community, politicians, interfaith community. Everyone was present. We prayed over Roby’s family and spoke on his behalf,” said Karmann. “Then we marched to the downtown area where politicians spoke on behalf of immigrant rights and Roby Sanger.”

The church and other community activists have been meeting with the ACLU and working through the legal process. “We spent three days preparing and filing all of the paperwork. It is far harder than I thought and if it’s hard for white Americans to work through this, I can’t imagine how difficult it is for others,” said Karmann.

Sanger is the only one in his household who is employed and his detention places a financial burden on the family. The church set up an account on Friday to raise money to cover costs.

“In 24 hours, more than $12,000 was raised and as of Monday, more than $20,000 in donations and funds had been collected,” said Karmann. “The money will be used to cover legal fees, rent and all bills since he was the only source of income.”

The arrests on Thursday have generated interest from local mayors to congressional representatives and the governor’s office. The Rev. Dr. J. Herbert Nelson II, Stated Clerk of the Presbyterian Church (U.S.A.), traveled to Metuchen on Friday and met with church leaders and Sanger’s family.

“Roby Sanger is a member of our faith family. We must bind to one another and rise up to keep our family together. It is his faith that caused him to flee to the U.S. and it will take the faith of all of us to keep him here safely with his family now,” Nelson said after his time with the congregation. “I am grateful to the Presbytery of Elizabeth for their active presence on the ground accompanying the family and the congregation. The Office of the General Assembly is here to support these efforts and to ask members across the denomination to do the same.”

The Office of Public Witness has issued an action alert on the situation in New Jersey.

To learn more on how to support immigrants, click here, or to find out about the OGA family care plan, click here. For more information about First Presbyterian Church in Metuchen, go to www.fpcweb.org.