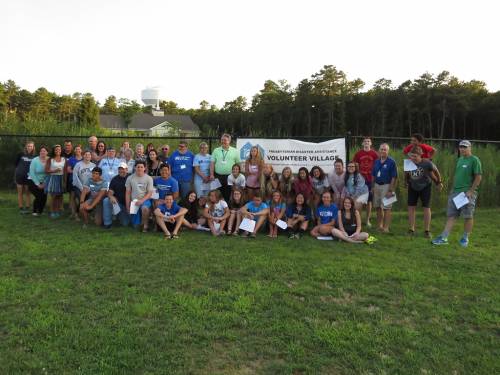 LOUISVILLE – In the nearly four years since Hurricane Sandy struck the United States, volunteer work teams from across the country have traveled to the hard hit regions, particularly New Jersey and New York, to help people recover and return to their homes. But after countless days, weeks and months of hosting teams, one church believes the time has come to close the doors on its Sandy relief efforts.

Morning Star Presbyterian Church of Bayville, New Jersey quickly joined other churches and organizations when Sandy came ashore in 2012 to help restore life to communities that were heavily damaged by the storm.

“Right after the storm, Presbyterian Disaster Assistance came to us and began talking about the potential of hosting a volunteer village here,” said the Rev. Dr. Myrlene Hamilton Hess, pastor. “And it took us a while to get things set up.”

With grant assistance, the church hosted as many as 91 work teams, totaling more than 1,500 volunteers who worked 82,000 hours over 609 days, according to Hamilton Hess. The volunteer labor is valued at $23.56 an hour totaling more than $1.9 million.

“There were a lot of grassroots organizations that were at work doing a variety of things from mucking out to rebuilding in the first year,” she said. “During the second year, the teams did more substantial construction work along with a lot of demo work. By the third and fourth years, we were doing a lot of basic construction; tons of sheetrock, floors, rebuilding the interior of homes as well as roof and exterior work.”

Hamilton Hess says the church was built as a multi-purpose facility in 2007. Since it didn’t have a traditional sanctuary, the visitors could eat there, sleep downstairs and mix and mingle with church members.
“We would welcome them and visit them on the worksite to make sure work was going well,” she said. “We would feed them one night a week and have an actual program where they would share what was going on during the week.”

Hamilton Hess says the church has always had a sense of mission about it; hosting a food pantry as well as AA meetings. But when the Sandy work began, she says the congregation developed a sense of community it had not seen before.

“The teams have always said we’ve given them a great thing by opening doors, but what our team always saw was the sacrifice of those who came,” she said. “People taking a week off from work to do this whether it was vacation time or a week without pay. They paid all of their own expenses, gave of their time and resources for a selfless act with a great amount of enthusiasm. It had a big impact on our church.”

Hamilton Hess said it also had an impact on the teams that came.

“They kept saying what a warm welcome they got here and how they felt at home. I think we gave them that sense of home, a sense of being safe,” she said. “They were never in the way and were always welcome. We usually had a dog or two around for them to interact with so they would have a taste of home. There was a sense of openness and some felt they could go back and operate their own village in emergency situations.”

While recovery and rebuilding work continues, the demand for work teams and projects in Morning Star’s region has changed. Hamilton Hess says it is harder to find projects to assign teams to and the congregation felt it could no longer maintain the village without being able to deliver on work projects. In addition, Hamilton Hess is retiring in the coming weeks and the church is preparing to seek out new leadership.

“The church is going to be doing some re-tooling and asking ‘God, where do you want us?’ That’s what brought the village to us,” she said. “Now the church is asking that question again as it begins pastor search mode. We’re not sure what’s next.”

The village officially closed at the end of July. Church members gathered to take down the village banner.

“Every person who served on this volunteer village team felt called to do that. This is a work that God wanted us to do. More than anything we have ever done in our church’s life, we felt so clearly that this was a call from God to do this work,” she said. “Now we feel God is saying it is time to close it. But I’m sad about it. It’s been incredible for me and I’ve personally loved being involved with this.”