‘Buechner 101’ features essays by and tributes to writer, theologian and pastor 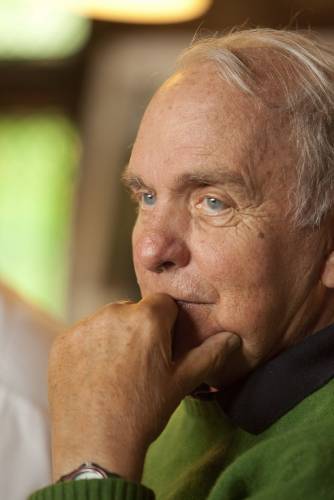 LOUISVILLE – Frederick Buechner turns 90 this Monday, July 11, and his friends and admirers have turned out a compiled volume of work in honor of the beloved writer and public theologian. Curated by author Anne Lamott, Buechner 101 samples his essays, sermons, and excerpts from memoirs and novels. The book also features homages by devotees such as Lamott, Barbara Brown Taylor and Brian McLaren.

Buechner (pronounced BEEK-ner) is “America’s most important living theologian,” according to Lamott, who has been “foisting” his books on friends for 30 years. “I think I can be a pest in my insistence that anyone interested in God, grace, meaning and truth needs to immerse his or herself in his memoirs, essays, novels and sermons.”

“One of his strengths [as a writer] was that he was so good about getting really compelling points across very succinctly,” said Brian Allain, director of The Frederick Buechner Center. “Even though some of the excerpts in Buechner 101 are really short, they will be impactful to people. It’s intended to give readers a flavor of the different types of things he wrote and hopefully spark interest in learning more.”

Imminently quotable, his familiar definition of vocational calling has resonated with a generation of spiritually minded people, saying, “The place God calls you to is the place where your deep gladness and the world’s deep hunger meet.”

“People have noted that his writing is timeless,” said Allain. “In particular, his non-fiction. In many ways his thinking, and dare I say theology, was ahead of its time. My personal view is that the rest of Christianity is catching up with him. There are many things he said that are very compelling, and at the time may have seemed a little bit out there. But now more and more people are coming to see the wisdom of his views.”

The author of 37 books, Buechner’s best known works include The Book of Bebb, a tetralogy based on the character Leo Bebb; Godric, a first person narrative of the life of the medieval saint, and a finalist for the Pulitzer Prize in 1981; Secrets in the Dark, a collection of sermons; four volumes of memoir, The Sacred Journey, Now and Then, Telling Secrets, and The Eyes of the Heart; and his best-selling Listening to Your Life: Daily Meditations with Frederick Buechner.

Lecturing at New York University in the mid-1950s, Buechner attended Madison Avenue Presbyterian Church and became friends with the church’s famed pastor George Buttrick who had succeeded Henry Sloane Coffin. Inspired by Buttrick’s calls to Christian action, Buechner enrolled at Union Theological Seminary and studied under Reinhold Niebuhr and Paul Tillich. He graduated from Union and was ordained at Madison Avenue Presbyterian as an “evangelist,” rather than to a specific church, in June 1958. Buechner was called later that year to establish a religion department at Phillips Exeter Academy where served as professor and chaplain until 1967.

Following the publication of his last book, The Yellow Leaves: A Miscellany in 2008, Buechner retired to Vermont and, according to Allain, he has enjoyed travel and is in good health upon entering his 90th year.

The Frederick Buechner Center supports the distribution of Buechner’s writings around the world.