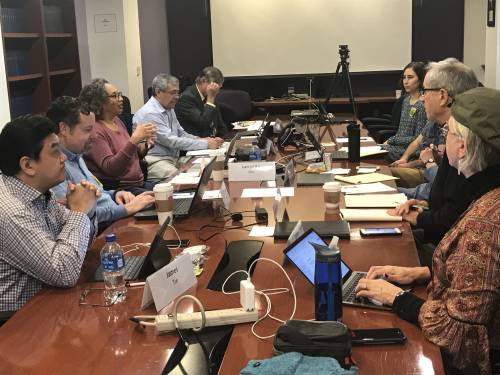 LOUISVILLE — Wrapping up its initial in-person meeting over the lunch hour Tuesday, the Moving Forward Implementation Commission set its sights ahead in the traditional way —  scheduling its next meeting, agreeing to bi-weekly video conferences and dividing its work into four subgroups.

The four groups — all with at least three members of the 12-member commission — are financial sustainability and the A Corporation transition, shared services, vision and discernment, and inclusion and equity/agency culture.

The commission’s next in-person meeting will be in Louisville March 25-26, with meetings tentatively set for July and October. The July meeting is intended to occur in a retreat setting.

The commission, established by the 223rd General Assembly last year to ensure compliance and implementation of Assembly action, was directed to carry out the Assembly’s will in areas including adequate staffing for translation services, establishment of a Diverse Voices Table and the completion of race audits for the six agencies of the Presbyterian Church (U.S.A.).

On Tuesday the Moving Forward Implementation Commission urged denominational agencies and Presbyterian Women to send two representatives each to the Diverse Voices Table, set to meet for the first time later this month.

“We continue to be excited about the coordination and collaboration which the Diverse Voices Table can model as they lift up best practices for equity and inclusion, which are central to our identity, our mission and our growth,” the commission said after agreeing to a statement crafted by the Rev. Eric Beene, a commission member. “Full investment in the Table by all agencies is essential to the coordination and collaboration and a sign of the new openness the church is called to.”

As to the commission’s authority moving forward to complete its work before the 224th General Assembly on June 20-27, 2020, Laurie Griffith, Associate Director for Constitutional Interpretation, said in an opinion that the 223rd General Assembly “gave the Moving Forward Implementation Commission the power to take any and all administrative action necessary to accomplish the Way Forward Commission initiatives as reflected in the recommendations approved by the General Assembly and the Administrative Supplement available to the General Assembly as information only. The Administrative Supplement provided the greatest outline for the recommendations and will provide a guide to the Moving Forward Implementation Commission as it engages in its reviews and evaluations.”

After receiving that statement, the commission voted to enter into executive (closed) session. Nearly an hour later, commission co-chair Marco Grimaldo said the discussion had centered on the commission’s relationship with the A Corporation and “advice on how to do that better as there is new information coming from them soon.” The A Corp. is scheduled to meet via video conference Wednesday.

Grimaldo added: “Going forward, we will be in conversation with the A Corp. co-chairs,” Chris Mason and Bridget-Anne Hampden.

At the onset of Tuesday’s meeting, commissioners discussed the Exodus account of God leading the Israelites — via a roundabout way through the wilderness — using a pillar of cloud by day and a pillar of fire by night.

Commissioners saw value in the brief study, led by Beene.

“People are looking to us,” said the Rev. Debra Avery, a commission member, “to help them navigate this wilderness of change.”