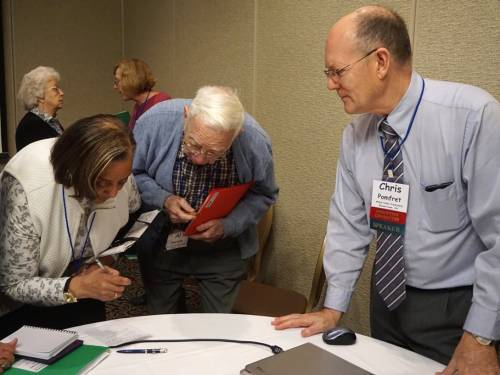 RICHMOND, Va. – There was at least one elephant in the room at Chris Pomfret’s workshop at the 2016 ARMSS/POAMN conference.

But an elephant could scarcely have fit into the packed meeting space, which nearly exceeded the room’s seating capacity as extra chairs were carried in to accommodate conference-goers eager to engage the workshop’s theme, “Making Our Third Thirty a Great Thirty: How to Make the Difficult Decisions.”

The elephant in the room—later named by one workshop participant as the fear of contracting Alzheimer’s disease or dementia—was voiced as part of an interactive discussion led by Pomfret on what adults fear the most as they get older, and, related to that, what can be done to allay those fears.

Pomfret’s was one of over 20 workshops being offered at this national event co-sponsored by the Association of Retired Ministers, Their Spouses or Survivors (ARMSS) and the Presbyterian Older Adult Ministries Network (POAMN). Entitled Christian Discipleship: People of the Spirit, People of Hope, the annual conference is being held October 11-14, at the Four Points by Sheraton.

In a continuation of the topic he first explored at the 2015 ARMSS/POAMN conference in Albuquerque, N.M., Pomfret, an aerospace engineer and a ruling elder at Bath Presbyterian Church in Dayton, Ohio, said it was his own difficulties watching his parents decline in the last years of their lives that gave him a calling to help people deal with “aging wisely” in their “Third Thirty” (age 60-90), what he called the last third of life.

“I want you to take away some inspiring thoughts to help you reflect on your own situation and how you are prepared for the ultimate end when you leave this earth,” said Pomfret in introducing his interactive workshop, designed, in part, to help people get beyond their denial of the inevitable.

Pomfret began his presentation by reviewing the life cycle, noting the similarities between the first and the last 30 years of life. “We have adult diapers now, and grumpy old men” he said, tongue in cheek. “I’m 61.”

As the group’s candid exploration continued, Pomfret posed a series of questions and discussion starters, beginning with, “What is the singular most important thing you need to do for your ‘Third Thirty’ but have not yet done? Why not?”

“When you work, you have a community,” said the Rev. S. Miriam Dunson, who is attending the conference from Commerce, Georgia. “When you retire, you don’t have them anymore, so building a support group around yourself—you to them, them to you—is very important in that third thirty.”

Among the fears named by the group during the second discussion starter were becoming disabled, experiencing loneliness—especially the loss of a spouse, safety concerns, entering a nursing home, lack of independence, and the deterioration of one’s mental faculties as a result of Alzheimer’s or dementia.

Pomfret then offered some basic solutions to help minimize those fears. “Simplistically, when you age you have three choices,” he said. “You can stay in your own home, live with a loved one, or move into a continuing care community. Not thinking about what you’re going to do is not doing the right thing.”

He also suggested that there are “beacons of hope” associated with each of the fears that were named, such as the ever-improving quality of retirement communities.

Borrowing from the wisdom of the Rev. Billy Graham in his book, Nearing Home: Life, Faith, and Finishing Well, Pomfret also offered some perspectives to keep in mind, including one emphasizing spiritual life and growth.

“Don’t resent growing old—many are denied the privilege,” read one statement. “We have the blessing of a full life with more to come.”

Pomfret ended his workshop with a list of “homework for the weeks ahead,” most notably the recommendation that attendees talk about starting a “Third Thirty” group in their home congregations, for which he offered to provide a model and support materials.

“He really means that,” said one enthusiastic participant following the workshop. “I gave him my email and he’s sending us his presentation. It was great.”