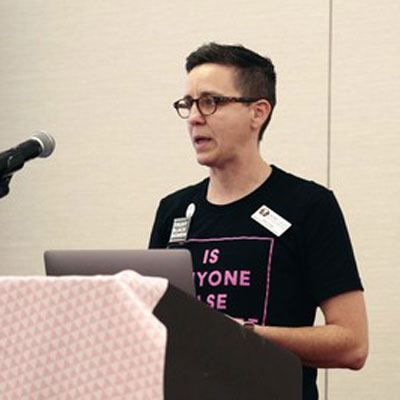 LOUISVILLE — More Light Presbyterians announced Tuesday that the Presbytery of the James has approved Jess Cook for ordination to Minister of the Word and Sacrament to the validated ministry position of the organization’s program and communications manager.

In a news release, More Light Presbyterians said it celebrates that Cook is the first openly non-binary person to complete the ordination process and be ordained within the PC(USA).

“We rejoice that Jess’ visibility as a non-binary faith leader has already made room for LGBTQIA+ people to see themselves as image-bearers of the divine,” the release stated.

“We at More Light affirm along with the 223rd General Assembly of the PCUSA, ‘Honoring the breadth and variety of our gender identities and expressions is one of the ways we can come to an even deeper understanding of who we are created to be in relationship to God and each other,’ from Overture 11-12, Affirming And Celebrating The Full Dignity And Humanity Of People Of All Gender Identities.”

“Jess is an exceptional pastor,” said Alex Patchin McNeill, More Light Presbyterians’ executive director. “I am thrilled Jess will be able to serve as a Minister of the Word and Sacrament in the position as program and communications manager at More Light Presbyterians. Ordaining Jess to this role honors what is already true, that Jess serves in such a way so that the ‘ministry of the whole people of God may flourish’ (Book of Order G-2.0102). Ordaining Jess to this role also expands their capacity to be a colleague and ministry partner to congregations and leaders who seek to live out commitments to LGBTQIA+ inclusion.”

“Ordination marks the turning point of a lifelong journey of faith, and the beginning of a journey as an ordained minister,” Cook said. “I’m acutely aware of the people who worked tirelessly to make it possible for an openly non-binary person to be ordained in the PC(USA), and of the young people who feel a call to ministry and will now see themselves in a person leading worship. I am steeped in gratitude for these communities, for the community of More Light, and for the opportunity to live into this call.”

During the More Light Presbyterians luncheon at the 223rd General Assembly last year, Cook said that the best way church members can support LGBTQIA+ youth in their congregation is to “trust young people when they tell you who they are.”

“In church, if they constantly have to defend their identity — if worship is only ‘brothers and sisters’ — youth will simply opt out of church,” Cook said. “When we baptize, we promise to nurture them. We promise to journey with young people. I can’t find it stated anywhere that this commitment is conditional. We have an obligation to help LGBTQIA+ youth.”

The Presbytery of the James and More Light Presbyterians will celebrate Cook’s ordination at 2 p.m. on Saturday, June 29, at Ginter Park Presbyterian Church in Richmond, Va. The Rev. Dr. Brian Blount, president of Union Presbyterian Seminary, will preach. A reception will follow.