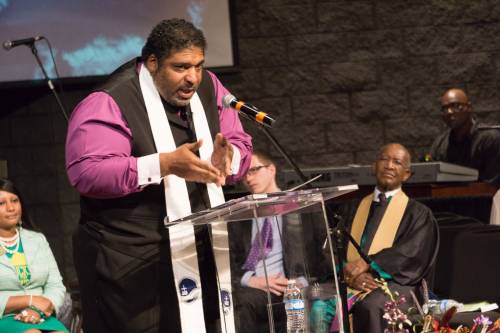 LOUISVILLE – The Moral Revival made its latest stop on a 20-city tour at St. Stephen Baptist Church in Louisville last night. In collaboration with the Kentucky Council of Churches, headed by PC(USA) minister the Rev. Dr. Peggy Hinds, and local ministries, the Rev. Dr. William Barber II brought his message of moral governance based on Christian values to the city, urging clergy to preach on and act for just policies in the city and state.

Likening the current political system to a failing heart, Barber said before a heart attack there are many noticeable contributing factors, and went on to list the three ailments that he sees in the U.S.

“Heretical Theological Disorder,” said Barber, is the cooption of Christians by a right-leaning political agenda that doesn’t consider the poor or needy, and fails to see people as deserving of equal rights. Continuing a litany of social woes caused by such policies, and deeming them un-Christian, he said white evangelical Christians have the most to gain by such policies, enforcing racism and classism in order to maintain their status.

“Inconsistent and Irregular Constitutional Arrhythmia” was Barber’s second political disorder. Reading the Constitution he challenged listeners to consider what “We the people” really means in light of existing and proposed exclusionary policies against people of color, immigrants and varied sexual orientations. Saying the writers of the Constitution were humble enough to admit they were on the way to creating “a more perfect union,” he warned, “If you can’t repent, you’re not constitutionally fit to hold office.”

Barber’s final ailment of the political system was “Serious Septic Systemic Racism,” which he said was a threat to all people, saying it is the only explanation as to why those who have the most to gain from government social programs often vote against their own interest. “The problem with racism today is not with the people in hoods, it’s with those in suits,” he said. 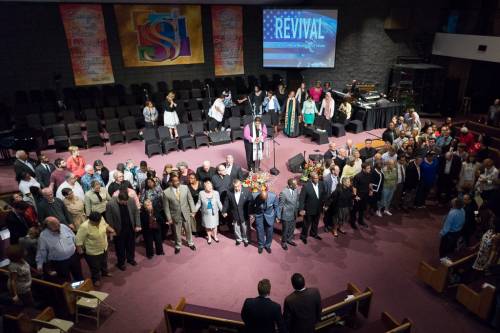 Clergy gather at the front of the sanctuary at St. Stephen Baptist church during the October 4 ‘Moral Revival’ committing to preach and act on Christian moral principles. (Photo by Gregg Brekke)

The Rev. Dr. James Forbes, retired pastor of The Riverside Church in New York City and a long-time social justice advocate, preached on a theme of God’s continued revelation. Just as Peter had his mind changed in the biblical book of Acts regarding what was considered clean and unclean in the Jewish dietary system, Forbes repeated the refrain “the Holy Ghost has a way of doing a thing” to disrupt prejudices.

“Vote, protest, go to jail, voice your discontent, sign a petition, contribute to a cause, commit acts of kindness, write a letter to your elected officials, write a letter to the editor,” he said, encouraging attendees to be part of the solution to injustices.

At the conclusion of the service Barber invited pastors, rabbis and imams to the front of the church, asking them to preach messages of religious justice principles to their congregations and encouraging them to invite others to share their testimonies of how they have been harmed by unjust policies.

The Moral Revival continues its tour, making stops in Minneapolis, Minnesota; Charleston, South Carolina; and Milwaukee, Wisconsin prior to the U.S. elections on November 8.

We declare that the deepest public concerns of our nation and faith traditions are how our society treats the poor, those on the margins, the least of these, women, children, workers, immigrants and the sick; equality and representation under the law; and the desire for peace, love and harmony within and among nations.

Together, we lift up and defend the most sacred moral principles of our faith and constitutional values, which are: the economic liberation of all people; ensuring every child receives access to quality education; healthcare access for all; criminal justice reform; and ensuring historically marginalized communities have equal protection under the law.

Our moral traditions have a firm foundation upon which to stand against the divide-and-conquer strategies of extremists. We believe in a moral agenda that stands against systemic racism, classism, poverty, xenophobia, and any attempt to promote hate towards any members of the human family.

We claim a higher ground in partisan debate by returning public discourse to our deepest moral and constitutional values.