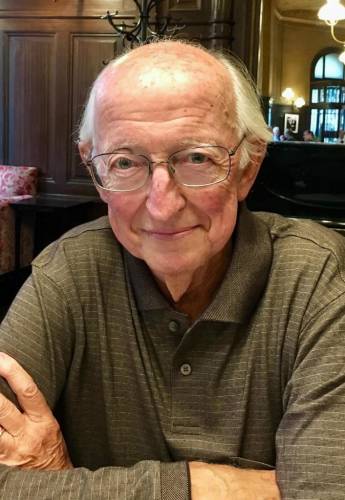 ST. PAUL, Minn. — Michael Lukens is a theologian, a civil rights activist, a Bonhoeffer scholar, a parliamentarian and an expert in Presbyterian church law. But soon, for the first time in 45 years, he will not be the stated clerk of Winnebago Presbytery.

“As of December 31, [2017], I’m history,” Lukens said recently from his home in De Pere, Wisconsin. “Stated clerk is a part-time job, and I’ve always dropped everything to do what needed to be done.” But now, his study of the German theologian Dietrich Bonhoeffer will take precedence.

As stated clerk, Lukens has been responsible for the presbytery’s record-keeping and for facilitating the judicial process to interpret church law when necessary. On the national level, however, he served 10 years on the Presbyterian Church (U.S.A.) Permanent Judicial Commission in the 2000s, during a time of conflict over whether gay and lesbian persons could be ordained or married in the church.

“He was a fantastic contributor,” said Laurie Griffith, associate director for constitutional interpretation in the Office of the General Assembly. “He was very precise and thorough in both his theological analysis and his church polity analysis.” The denomination accepted the ordination of gay pastors in 2011 and marriage of gay couples in 2015. But the years of litigating sexuality cases meant a heavy caseload, and Griffith added that Lukens was noted for trying to find broadcasts of Green Bay Packers games when the commission met on fall weekends.

“I regretted the issues, but I was happy to be in the midst of it, because of the intellectual and theological challenges,” Lukens said. “We should have stayed on a theological focus, but the heart of the conflict was over rules and procedures. If we’d had a more explicit theological declaration of inclusive scripture, we’d have been in a stronger position.”

But inclusion and justice were important to Lukens long before he began arbitrating intra-Presbyterian disputes. Although he grew up a child of privilege in a family of moderate Republicans, his experience as a volunteer civil rights worker in the early 1960s radicalized him. “It was deeply shocking to me,” he said. “I had to deal with wickedness.”

In 1964, he spent the summer in Hattiesburg, Mississippi, registering black voters. He and other volunteers from the North would escort them from their poor neighborhoods to the courthouse under the watchful eye of national TV news crews. That, he thinks, helped prevent violence, “but it was still brutal. Urine would be dumped on us all the time. It became a joke. We called it our special perfume.” He was arrested with several other young pastors and spent a week in jail, but was not charged with anything.

“I was a different person when I came back,” he said.

When American unrest grew worse the late 1960s, he was living in Germany as a graduate student. “I thought society was imploding,” he said. “1968 was really bad. We have very serious issues now, but I don’t think we’ve reached that depth.”

Before his civil rights activism, Lukens had graduated from Union Theological Seminary (where he was one of Reinhold Niebuhr’s last students) and served as an associate pastor at a wealthy Long Island church — but it wasn’t a good fit.

“I’m an intellectual, and I understood my principal call to be research and teaching,” he said. After he earned his doctorate in theology in 1970, his only job offer came from St. Norbert College, a Catholic liberal arts school in De Pere. He didn’t expect to stay long, but his tenure lasted 38 years before he retired in 2008.

As a relatively new faculty member, Lukens got a call from the pastor of a big nearby Presbyterian church, “and he just said, ‘You’re going to be our next stated clerk’” — typical of the way things worked at the time in most presbyteries, he said. “There was an election, but it was a formality. There was no job description and no support.” That, he hastened to add, has changed a lot in the intervening years.

But even plunging in unprepared, he had some things going for him. The detail-oriented job suited him, and he liked being involved in church life without leading a congregation. And he likes meetings, too — if they are well run.

In retirement, Lukens and his wife, Barbara, plan to spend longer periods of time in Berlin for his research. “I have a huge emotional and scholarly investment in that work, and I can’t do it well if I’m constantly distracted. I’m 80 years old, and I need to have focus.” The couple has four sons and nine grandchildren.

The Winnebago Presbytery, like its member churches, has “gotten smaller, but we’re so much more active,” Lukens said. Rather than lament the decline of the Protestant mainline, he sees it as an opportunity.

In decades gone by, he could call a U.S. senator and get an appointment; today he’d be lucky to meet with a representative’s assistant. “But being a minority [denomination] is not a bad thing. We can do a lot as a minority. We have greater freedom and more intense commitment. We’re getting back to a church that sees itself as agents of Jesus on the street.”

“Michael is full of optimism,” said Sarah Moore-Nokes, the general presbyter of Winnebago Presbytery, “He always sees possibilities; the future will always be better. And that’s a great gift. He is a thoughtful, passionate, but always neutral voice.” Being both passionate and neutral is hard, “but he does it,” Moore-Nokes said. “It’s amazing to watch. It’s the core of who he is.”

Lukens sees a parallel to the time after the fall of the Roman Empire when the church retreated into convents and monasteries, “but by the 11th or 12th centuries, the seeds had borne fruit.” He anticipates a similar revival in coming decades. “I’m sorry I’m not going to be around 30 years from now, but there’s going to be some great stuff.”

Letters and note of encouragement can be sent to mblretires@winnebagopresbytery.org or 181 E. North Water Street, Neenah, Wisconsin 54956.

Those planning to attend the party should respond to kelly@winnebagopresbytery.org.

David Lewellen is a free-lance writer based in Glendale, Wisconsin. He writes frequently for the Synod of Lakes and Prairies.