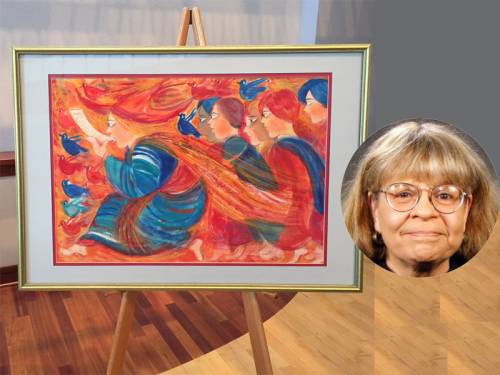 A painting will hang just outside Susan Stack’s last office in commemoration of her three decades of service to PHEWA and PC(USA). Inset: Susan Stack. Scott O’Neill

Stack, who spent nearly 35 years as a key staff person for PHEWA helping people with domestic violence, AIDS and women’s rights issues, retired in 2016 and died in February after an illness. She posthumously received the John Park Lee and Rodney T. Martin awards for her commitment and service earlier this year at the 223rd General Assembly in St. Louis.

Robert Brashear, a former president of PHEWA and retired pastor, welcomed participants to the service who represented parts of Stack’s life. Rev. Melissa DeRosia, a former intern of Stack’s, led the call to worship and was followed by Compassion, Peace & Justice (CPJ) director Sara Lisherness, who read Micah 6:8, a Scripture that Lisherness noted was dear to Stack’s heart and embodied her spirit:

He has told you, O mortal, what is good;
and what does the Lord require of you
but to do justice, and to love kindness,
and to walk humbly with your God?

“PHEWA was the space where Susan was able to live out her core values,” said Lisherness. “She gave her life to this ministry — PHEWA was her life. It was where Susan ‘did justice, loved kindness and walked humbly with her God.’”

Several of Stack’s colleagues shared reflections of working with her over the years. They included DeRosia; Milton Tyree, a PHEWA disabilities consultant; Vernon Broyles, a volunteer for public witness in the Office of the General Assembly; Nancy Troy, a former executive director of PHEWA; and Virginia Copenhafer, a former PARO representative.

Tyree referenced a quote from Mahatma Gandhi in describing Stack: “The best way to find yourself is to lose yourself in the service of others.”

“It was never about Susan — it was always about the cause,” said Tyree. “In a day or time when some are absorbed with their own sense of self-importance, Susan was a servant leader.”

Broyles noted that the 10 mission networks that comprise PHEWA was Stack’s ministry.

“This was her congregation that she nurtured and guided to make sure all of us had what we needed to do our work. One of the most amazing things about Susan was despite all she had to deal with from various directions she quietly did her work. There would not a PHEWA without Susan,” said Broyles.

DeRosia was a first-year student at Louisville Seminary when she first crossed paths with Stack.

“As an intern with PC(USA), I learned a lot about polity, theology and our denomination, but it was Susan who taught me about ministry,” said DeRosia. “Susan was a prophet in her own way, standing both inside and outside the institution that she loved, yet was frustrated when we weren’t living into our biblical mandate.”

The Rev. Bob Schminkey, secretary for PHEWA and the Rev. John Scotland, PHEWA president, dedicated a painting in Stack’s honor in recognition of the work she performed for the denomination over three decades. The painting will hang outside Stack’s last office at the PC(USA) center in Louisville.