Presbyterian Women group takes their values and concerns to the streets 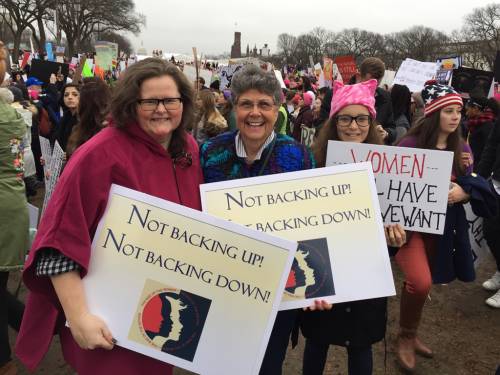 LOUISVILLE – Presbyterian Women were among an estimated 3.3 – 4.6 million people who rallied at Women’s Marches across the country Saturday to advocate for women’s rights, access to affordable health care, protection for immigrants and racial minorities and, for many, against a newly inaugurated President who has bragged of sexual assault and made misogynistic statements. Four women from Farmington Presbyterian Church in Germantown, Tennessee, joined approximately 600,000 marchers in Washington, D.C., to add their voices to this chorus.

Rebecca Hutchins joined the Farmington church as their soprano soloist over six years ago. Her 13-year-old daughter Simone convinced her to make the drive to join the march along with church members Bonnie Blair and Kirsten King.

For Hutchins, Presbyterian values were at the top of her concerns, and the reason she felt it was important to attend the march. “I don’t believe [Presbyterian values] are being protected with the direction the courts are taking, with the president and his cabinet,” she said. “I had to go and stand up and be counted in the number of people—not just women—who agree that we cannot continue down this path without hurting people, making the world a darker place for all of us, including our children.”

Hutchins said it wasn’t her eighth-grade daughter’s first exposure to protest, though it was certainly the largest. But advocating for a future free from flaunted misogyny was also a vital reason to speak out about “someone as high profile and as powerful as the President of the United States with a history of mistreatment of women, of stereotyping what makes women beautiful, desirable and acceptable.”

“I don’t want to see the world go in that direction, and I don’t want that for my child,” she said “I don’t want her judged on her figure, or the length of her hair or the color of her skin. I want her to be respected for her character and values.”

Saying the march—along with navigating an overcrowded subway system and trying to get around the city in the huge crowd—was “the most exhausting thing I’ve ever done,” Hutchins was pleased by the diversity of the crowd, noting, “Not everybody was there for the same reason and that was abundantly clear by the different chants, t-shirts and signs.”

Yet, her group’s goal was clear: “Certainly as a Presbyterian woman, it’s [about] showing everyone the love of Christ, but I don’t always expect to get it back in this world. Yet I was pleasantly surprised to see people were nurturing, and caring, and loving toward one another in every circumstance.”

What next for the participants? Now that the march is over and they’ve arrived home, what is the course of action?

“We had plenty of time to discuss that on our trip home. There are small groups popping up everywhere and there are going to be opportunities for us to join forces and join voices with other people of like minds,” said Hutchins. “The most important thing my daughter and I agreed on is that we’re going to talk one-on-one with people we come in contact with.”

“We cannot just put aside politics because it’s a difficult topic, and that’s always been the polite or nice thing to do, especially for women. There’s no sense in arguing, but we think we can offer polite discussion.”

Farmington Church member Bonnie Blair is 78 years old, a 55-plus year member of Presbyterian Women, and said she’s been “fighting for Presbyterian issues since I was about 20 years old.”

Of particular concern for Blair is the attack by Republican politicians against women’s health services provided by Planned Parenthood. She said the issue goes beyond the false perception that the only service Planned Parenthood provides is abortion.

“I could never have an abortion and I’m against abortion,” she said. “The federal government already does not pay for abortions. But women’s health issues—people who go there for cancer screenings and checkups and prenatal care—that’s what people are going there for. I can’t see why the government would quit paying for healthcare for these women who can’t afford it.”

“What the Republicans are saying is they’re not going to stop caring for women’s health—they’re going to let the government pay for it in local clinics. And we all know that’s not going to work. Planned Parenthood works. Why mess with something that already works?” questioned Blair. “But for those women who need healthcare, we need Planned Parenthood.”

She noted the struggles and issues have not changed dramatically over her decades of advocacy, finding humor in one protest poster. “It looked like a 60s hippie sign, and it said something like, ‘I had no idea I’d have to fight for the same issues in the 21st century.’”

Blair is hopeful that the country will see a surge of women running for elected office to make sure these issues are heard. “Women feel like we’re left behind. We fought many, many years for these issues, and for some of these to be taken away from us—we’re going to speak up and speak out all around this country. People are fired up.” 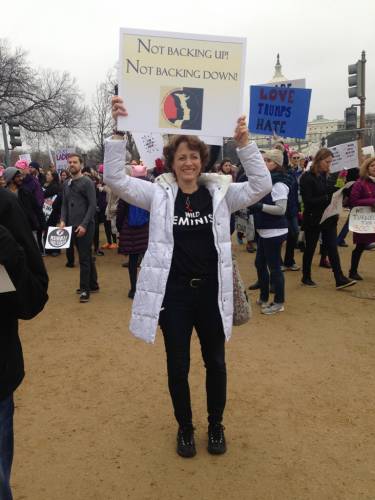 “Presbyterian Women have had a long history of representing the basic principles found in biblical theology of standing for the oppressed, and righteousness and justice,” said Farmington Church member Kirsten King of her belief that Presbyterian values were, and need to be, represented in protest. “The kingdom of God is an inclusive world, not an exclusive world… This is a message to all would-be servant leaders that we hold them accountable for defending human rights and justice for all.”

Wanda Beauman is vice moderator for justice and peace concerns with Presbyterian Women. She marched in Denver, Colorado, as the Association of Presbyterian Church Educators (APCE) was about to gather in that city.

Formally organized in 1988, Presbyterian Women and its predecessor organizations have been upholding women’s values, funding mission and education, advocating for families and helping to redefine the role of women in the church since the early 1800s.

“Our goal is to be inclusive of all women and their concerns and their celebrations,” said Beauman of the organization’s goals. “The work that we do through our missions and our justice and peace committee and through the grants we offer are aimed at helping [women] reach their goals.”

She said Presbyterian Women give grants through two programs: the Birthday Offering and the Thank Offering.  In 2016 Presbyterian Women grants totaled just over a million dollars to several projects including the Heartland 180 program that helped with education and training efforts of children aged 11-17 who had been part the juvenile justice system in Overland Park, Kansas; and Building Minds in South Sudan, which served the education needs of approximately 600 primary-school aged girls.

In 2017 Presbyterian Women is already set to fund a water project in New Mexico that will help provide water systems to 205 families at the Smith Lake Navajo Reservation and First Hand Aid Rural Clinic in Cuba, which will establish six medical clinics in partnership with and be located at Presbyterian churches in rural Cuba.

“As an African-American woman with some Native heritage, some of the divisiveness and hatred, and exclusions that we’ve heard is a little unsettling. It has been unpredictable what it’s going to mean,” Beauman said of the current political climate and Presbyterian Women’s commitment to justice issues.

“We know that change comes to us every day, but what is your footing now, what is your path, what are you going to do?” she asked. “The march initially has provided an avenue for thinking about what are you grounded in. What is your faith? What is your solid footing? And in the day-to-day changes, how can you express yourself and let your voice be heard?”