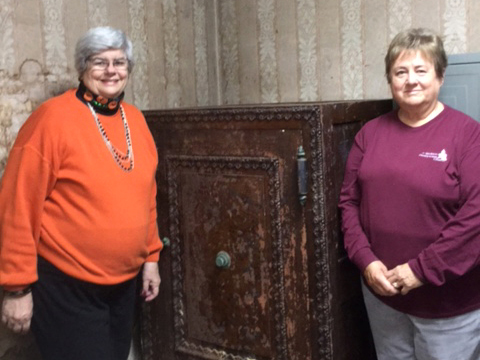 MADISON, Ind. – In 2014, a year before Madison Presbyterian Church’s 200th anniversary, Jill Wiest and I volunteered to see what information we could find to enhance the celebration. After looking through many old files we wondered if we had found everything—after all, there are many nooks and crannies in our 1846 church building.

What about that old safe in the small room off the kitchen that had been the pastor’s study in the 1800s? It took a while to find the right key, but eventually we did and opened it. To our satisfaction, it held a treasure trove of documents, letters, and ledgers that told of some of the highs and lows of Madison Presbyterian Church through the years.

The leather bound ledgers contained records of births, deaths, Sunday collections, disbursements for supplies, among other official registries, but most interesting were the loose papers, many of which were letters. A large number of them were personal letters written to Clerk of Session and local Madison businessman David McClure (1775-1836) and his family. It is not known why these letters ended up in the church safe, but they have given us added insight into our early church history and 19th century life here.

One letter was written in 1824 to McClure’s daughter, Martha by a schoolmate, Eliza Ann Ristine, of Crawfordsville. Her family had recently moved from Madison to that newly established settlement, and she wrote to her friend that there were only seven families living there. And “at this time, no school is here of any description and not much prospect of one for some time.” We felt this letter should be in Crawfordsville, and so we donated it to the Montgomery County Historical Society. 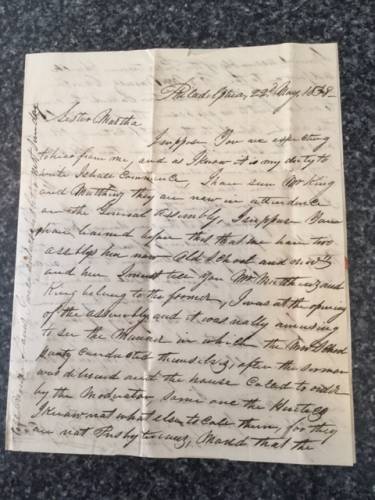 Letter written by Robert Marshall McClure to his sister, Martha McClure, in Madison, 22 May, 1838
Transcription, 8 lines up from the bottom: “I was at the opening of the assembly and it was really amusing to see the Manner in which the New School party conducted themselves, after the sermon and the house was called to order by the Moderator, came one (of) the Heretics, I know not what else to call them, for they are not Presbyterians, moved that the…”

A letter written to McClure in February of 1812 talks about the numerous strong aftershocks resulting from the New Madrid earthquakes in Missouri and Tennessee. The initial event, which occurred on December 16, 1811, shook windows and furniture as far away as Washington, DC and rang bells in Richmond, Virginia. People in Kentucky and Indiana certainly had damage done to their homes, and the writer, writing from Fayette County, Kentucky (Lexington), wondered if God was sending an ominous message about more dire events to come. He was concerned that God was trying to chastise the people, but firmly believed that everyone would come through it all right if they just kept the faith.

A chatty letter written in 1819 to David McClure from a friend in Boston told of the Yellow Fever epidemic there. Then he commented about a recent Madison Presbyterian minister whom, he heard, had “finally left the city. I thought he would never go … he must be a little cracked in the upper story, I think.”

Another letter written in 1829 to David McClure’s son William was quite alarming at first. The writer, William’s cousin Robert Marshall, stated that he was to be hung, and he requested that William “stand by and make sure that the rope is well tied around my neck.” Only after more careful reading did we see that Robert was “decreed guilty in Cupid’s Court” and that he was to be married!

Some of the McClure letters are related to events that impacted our church and our denomination. For instance, a letter written from Philadelphia on May 22, 1838 by William McClure to his sister Martha tells about the meeting of the General Assembly that he had just attended.

The New School/Old School split was apparently first manifested when those adherents to the New School, revivalist, philosophy left the meeting in anger and went off to another building to hold their own General Assembly. William called them “heretics … for they are not Presbyterians.” Madison Presbyterian had divided into the two factions, First Church (Old School) and Second Church (New School) in 1833. It was not until 1921 that First and Second churches were reunited.

We also found an 1846 document, not related to our church, which is a survey form apparently sent to all churches in the Indiana Synod, headquartered in New Washington. There are seventeen printed questions. The survey was filled out but it is undetermined whether it was ever sent.

The first six questions ask for information about the church’s current pastor,

(Rev. James Brownlee, who filled out the form), including: Place of Birth (Ireland), Education, Ordination, and Churches Pastored. 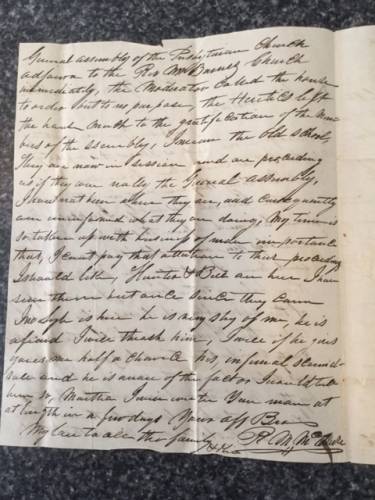 (Continued from p. 1, top of this page): “..General Assembly of the Presbyterian Church adjourn to the ? Church immediately. The moderator called the house to order but to us no purpose. The Heretics left the house much to the gratification of the Members of the Assembly, I mean the Old School. They are now in session and are proceeding as if they really were the General Assembly. I haven’t been where they are and consequently are uniformed what they are doing. My time is taken up with business of much more importance that I can’t pay attention to their proceedings.”

The next eleven have to do with the church itself: Name, (Presbyterian Church of Livonia in Washington County); Original Number of Members, (13); Names of Previous Pastors; Date of Founding, (1816); Year When the Building was Erected, (1820); and Description, (log house, 20 by 40 feet, then a brick building, 30 by 55 feet, built in 1826). Question 9 asks if the church was divided in the “recent division of the church,” and if so, “how many went to each branch of the church?” Answer: “About 100 went with the Old School, three elders and 25 private members adhered to the Constitutional General Assembly.” The final question: “Of how many members is your church now composed?” Answer: “50.” The form was to be sent to a committee charged with collecting this information. One of the members was the famous churchman of the Civil War era, Henry Ward Beecher, brother of Harriet Beecher Stowe, author of Uncle Tom’s Cabin.

We used much of the information found in the safe for our church’s 200th anniversary celebration in 2015. We hope to archive these papers at Hanover College, Hanover, Indiana.

What a great time we have had in discovering our church’s hidden past.

Editor’s Note: This first person account was submitted to Presbyterian News Service for publication. Please email news@pcusa.org with your story ideas for consideration. Please do not send completed manuscripts.