The Rev. Dr. Gloria Tate of the Presbyterian Church in Teaneck, New Jersey, retires after decades of service 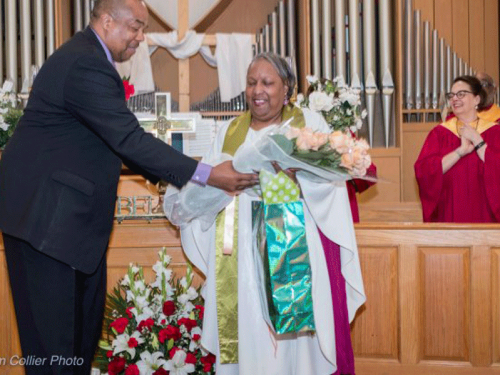 The Rev. Dr. Gloria Tate has received many awards and honors over the years but considers her biggest accomplishment to be “helping folks to understand who they are and who they can be in the power of Christ.” (Photo by Jim Collier)

LOUISVILLE — Before the end of her final sermon as pastor of the Presbyterian Church of Teaneck, New Jersey, the Rev. Dr. Gloria Tate capped off her nearly 30 years in the PCT pulpit by urging the congregation “to finish the race” despite her retirement.

“God’s workers may move on, but God’s work continues,” Tate explained to the members and friends of the church. “I entrust you to God, knowing that God has a purpose for this church, for God is working in your lives, just as God is working in all of our lives. I thank you for the honor and privilege that has been mine to walk with you as your pastor.”

Tate, who was ordained in 1977, leaves behind a legacy as the longest serving Black female pastor in the PC(USA) and as a beloved mentor to people like Ruling Elder Melvin England, who joined PCT after he and his wife were referred to Tate for premarital counseling.

“She married us. Our children were baptized at the church. They grew up in the church. They’re still there, so she actually became part of our family,” England said. “We really loved her.”

Over the years, she has been a hands-on minister and “a terrific leader. Very terrific. Always resourceful,” England said. “But she also had a way of stepping back and letting the leaders take ownership of some things when we needed to.”

During the farewell service in June, it was Ruling Elder James Young who laid down the law to members and other well-wishers who came to honor Tate.

“As the principal of an elementary school, I used to like to make a lot of rules and some of them were enforceable and some were not,” Young said. “We’re going to say we don’t want anybody to shed any tears this morning,” given that it was a celebration.

But after a bounty of kind words and stirring music, Tate had to confess, “Principal Young, I have failed.”

Nevertheless, she quickly returned to form, promising that she wouldn’t be long in giving her sermon, which referenced the Apostle Paul passing the mantle to his protégé, Timothy.

Before getting into the Scripture, Tate joked, “A pastor knows the church so well and wants to say so much but doesn’t have the time, especially when you’ve got a grill out there.”

The warmth and humor that filled the service was indicative of Tate’s tenure at the helm of the church, where she became pastor in 1993.

“I have known her for a long time, and I think she’s a remarkable woman,” said Loretta Swartz, who joined PCT in 1968. “I think she held the church together. Just with her manner and her humor and her wisdom and just helping the church survive, especially during the pandemic.”

Leading the multi-racial, multi-ethnic church, which used to be more heavily white, helped Tate to fulfill a calling that she’s been certain of since her seminary days.

Over the years, as a single woman, she would face sexism and other obstacles but persevered. “I am indeed proud of having withstood the challenges of being a woman pastor for these 45 years,” she said.

PCT, which is about 30 minutes northeast of Newark, New Jersey, across the Hudson River from the City of New York, has established a scholarship in Tate’s name to send people to college. “It’s off to a really good start, so I’m thankful to the congregation,” Tate said. “That will be one of the legacies that I’m proud of.”

During her own formative years, she felt that God was “opening little doors” and guiding her along while presenting new possibilities. “It was in my second year of seminary that I knew that preaching and ministry was going to be my thing,” she said.

Over the years, she earned many awards and honors but considers her biggest accomplishment to be “helping folks to understand who they are and who they can be in the power of Christ,” she said. “You know, it’s not about being able to memorize Bible verses. It’s not about quoting Scripture. But it’s about meeting people just where they are.”

England recalled a tough time when he and his wife were grieving the loss of a child. “I thank God for Pastor Tate and for the Presbyterian Church of Teaneck when we were going through that stuff because she just wouldn’t let go,” he said. 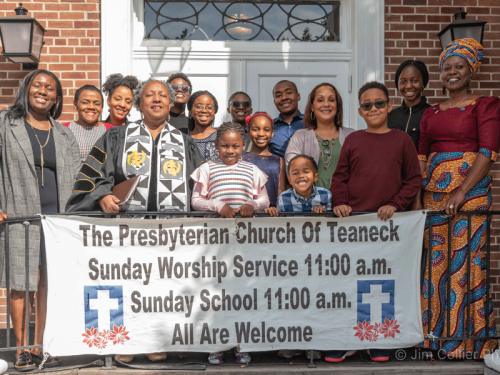 The Rev. Gloria Tate recently retired after 45 years in ministry, nearly 30 of them serving the Presbyterian Church of Teaneck, New Jersey. (Contributed photo)

He credits her with inspiring what has become known as the Presbyterian Church of Teaneck Charity Golf Outing, which formerly carried the initials of his belated son.

“With pastor’s help and assistance and with the Board of Deacons, we created a charity golf event … to give back to those in the community that are helping others,” he said.

The first organization to benefit was an early pregnancy loss support group that had helped England and his wife through their grief. More recently, $5,000 was gifted to the town’s high school for a program serving people on the autism spectrum.

“This is just an example of how she helps us identify blessings,” England said. “She’s just so positive, and we give thanks for that.”