The Rev. Dr. Gary Neal Hansen literally wrote the book on prayer with his ‘Kneeling with Giants’ 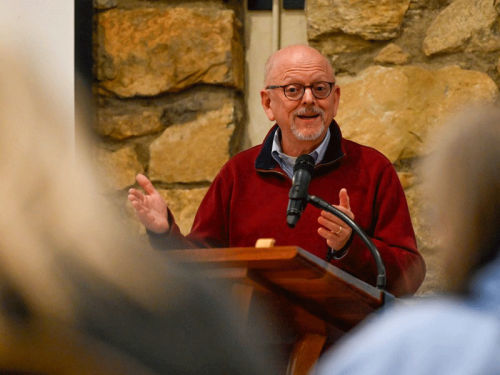 LOUISVILLE — Author and historian the Rev. Dr. Gary Neal Hansen, the author of the 2012 book “Kneeling with Giants: Learning to Pray with History’s Best Teachers,” used two hour-long keynote slots during The Immersion conference Wednesday in part to offer attendees “a well-rounded diet of prayer.”

“Who needs this?” Hansen asked. “It’s mostly for the person whose teeth you brush. It’s food for your own journey.”

The Immersion was a two-day conference put on by the Office of Vital Congregations and held at Montreat Conference Center and online.

Christians of course use all kinds of approaches in their prayer life, some scattershot and others reflecting a “more regular approach,” according to Hansen. It’s amazing, he said, the diversity with which people connect with God.

Prayer helps us speak to God, listen to God and go beyond our words and God’s words to allow us to simply be, Hansen said.

On that first role, Hansen had a few questions that might naturally occur to people. Who am I to talk to the Creator of all? How do I draw close to a God who’s not physically present?

We have the reformer Martin Luther as out guide here, Hansen explained. We’re given the Lord’s Prayer as a primer because “God wants to talk to you about daily bread, the kingdom and forgiveness of sins,” he said.

As for listening, “that still small voice inside your head isn’t always a good voice,” Hansen said. He mentioned St. Ignatius of Loyola’s Examen, a daily examination of conscience, as a helpful guide.

On being with God, Hansen held up Paul’s reminder to pray without ceasing. Any of us can pray at any time the Jesus Prayer: “Lord Jesus Christ Son of God, have mercy on me, a sinner,” a prayer that, as Hansen said, “puts us in a contemplative space. We are able to dwell with God with that call for mercy.”

“Try one,” Hansen said of the various kinds of prayers. “Evaluate it, then try another.”

During the second half of his presentation on Wednesday, Hansen focused on Mark 6 of the 7 Marks of Vital Congregations, Caring Relationships. “We learn how to be Christians together and not alone,” Hansen said. “I was working with a little church that wanted to grow without changing. I commended them for at least getting that out on paper.” One member told Hansen, “You know, we don’t want to get too close to each other.” Hansen told conference-goers, “that fits the way a lot of congregational life happens. I think we’re called to more than that.”

As one who’s done “a lot of pulpit supply” when a church’s pastor is away, “surprisingly often, no one will greet me or tell me where I might hang my robe bag or where the restroom is or even where the pulpit is. I think, when this is the greeting they give to someone they paid to come, what’s it like to come in off the street?”

“The doors are open physically,” Hansen said, “but often not relationally.”

Hansen said his ongoing interest is “looking at ways Christians have formed communities intentionally. They are gospel-shaped things” that “deepen discipleship, forge deeper relationships and end up having a disproportionately large impact on mission.”

“The degree to which we shape community life to the gospel,” Hansen said, “sets the measure of our loving, caring relationships.”

What would happen, he wondered, if we make our life together look like the gospel. “It’s worth pondering for presbyteries and sessions because it will only work well if we work together.”

There’s no single model for community formation, he said. “Make some choices and do some stuff,” Hansen suggested. “What if we decided to make building relationships front and center? Or education, so we can all articulate the faith we are trying to live? Or deep, beautiful worship in intentional ways? Any of those can come out of strong gospel priorities. Over time, you’ll grow as disciples and in your love for one another.” 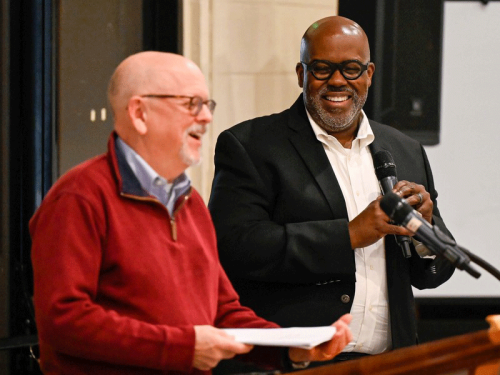 The Rev. Dr. Gary Neal Hansen, left, shares a moment with the coordinator of the Office of Vital Congregations, the Rev. Carlton Johnson, during The Immersion conference. (Photo by Rich Copley)

Hansen knows of one pastor who years ago accepted a two-point charge in a rural community. History had kept the churches separate. This pastor wanted to begin an education program but could start it up in only one church. Congregants from both churches eventually took on leadership roles, “and the people came to love each other,” Hansen said. Someone suggested a joint Thanksgiving service, and someone else thought it was time to start providing food and meals to hungry people in the community.

Finally, someone suggested the two merge. “They suggested it because it was the most natural thing,” Hansen said. “They knew they needed to be one church.” Later the combined churches took in another struggling congregation in town.

“You put on a project that matters and you will come to love one another,” Hansen said.