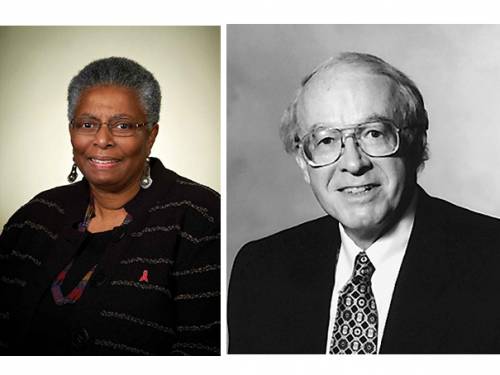 “The tremendous commitment and contribution to theological education and the Presbyterian Church of both Dr. Cannon and Doug Oldenburg were obvious to the Committee on Theological Education,” said the Rev. Dr. Tom Trinidad, pastor of Faith PC(USA) in Colorado Springs, Colorado, former vice moderator of the General Assembly and COTE Chair. “Presbyterians and the church owe them a debt of gratitude for many things, including their advocacy on behalf of or advancement of the concerns of marginalized communities.”

The two will be recognized at the General Assembly’s Theological Education Breakfast on June 21 at 7:30 a.m. Those interested in attending the breakfast should sign up as part of their General Assembly registration, which is now available online.

The Rev. Dr. Lee Hinson-Hasty is senior director of funds development for the Theological Education Fund at the Presbyterian Foundation, which will host the breakfast. He noted that the award is the highest honor in the PC(USA) for those who teach, lead and support theological education.

“Only 14 others have received this award,” Hinson-Hasty said. “Their individual and collective visionary work and frontier-forging leadership promotes the value of theological education in the church and is helping us draw people into the ministry in a time when that is desperately needed.”

More information on each of the awardees is below:

Dr. Katie Geneva Cannon is the Annie Scales Rogers Professor of Christian Social Ethics at Union Presbyterian Seminary. She received a bachelor of science degree from Barber-Scotia College in Concord, North Carolina, and a master of divinity from Johnson C. Smith Seminary in Atlanta. She received her masters and doctor of philosophy degrees from Union Theological Seminary in New York.

Cannon has taught at Union in Richmond since 2001 and has received numerous awards for her teaching. She has been the Lilly Distinguished Visiting Professor of Religion at Davidson College and the Sterling Brown Visiting Professor in Religion and African American Studies at Williams College. She has received the distinguished professor award from Spelman College, the Lucy Craft Laney award at the Black Presbyterian Bicentennial Celebration, and was a professor-scholar honoree at the National Black Church Summit at Emory University. Additionally, and significantly, she was awarded the Excellence in Teaching Award by the American Academy of Religion.

She has authored the following: Black Womanist Ethics; Katie’s Canon: Womanism and the Soul of the Black Community; Teaching Preaching: Isaac R. Clark and Black Sacred Rhetoric. She has edited God’s Fierce Whimsy: The Implications of Feminism for Theological Education. She has coedited the Womanist Theological Ethics (A Reader) with Emilie M. Townes and Angela D. Sims and The Oxford Handbook of African American Theology with Anthony Pinn.

Since 2012, Cannon has served as executive director of the Squaring the Womanist Circle Project at Union Presbyterian Seminary. This academic and communal integration of scholarly endeavor in womanist thought and practical application of womanist study and research to the social circumstances surrounding the lives of women of color has been widely supported by womanist scholars from around the country and world. Following from the research results learned from the Womanist Circle Project, Cannon is currently working with the administration of Union Presbyterian Seminary and several foundations to establish The Center For Womanist Leadership at Union Presbyterian Seminary. The center will be the first of its kind at any theological academic institution in the United States.

Cannon is the first African-American woman to be ordained in the United Presbyterian Church (U.S.A.).

The Rev. Dr. Brian K. Blount, president of Union Presbyterian Seminary, praised Cannon’s research, scholarship and commitment to her call. “Dr. Cannon has already had and will continue to have long-lasting influence on broadening the reach of theological education in the Presbyterian Church,” he said. “We are so honored to have her as part of our teaching faculty, knowing that she is one of the foremost theological ethicists, particularly as regards to womanist theology, in the country. We are grateful for her ministry in teaching the next generation of scholars and church leaders, her incredible research and for her work in the church beyond the seminary. Congratulations to you, Katie!”

In 1987, he became the seventh president of Columbia Theological Seminary, a position he held until 2000. Dr. Leanne Van Dyk, president of Columbia and professor of theology, extends her best wishes to Oldenburg. “I want to offer warmest congratulations to President Emeritus Doug Oldenburg from the entire community here at Columbia Theological Seminary,” Van Dyk said. “In so many ways, he has embodied not just education, but the practical impact knowledge and wisdom can make in local communities and national organizations. We are grateful to COTE for recognizing his lifelong efforts to educate and nurture faithful leaders.”

Oldenburg’s ministry extended far beyond the churches he served and the campus he led. In Lynchburg, he helped to organize a downtown ministry for disadvantaged children. In Elkins, he led a successful vote on a bond levy to raise teacher salaries. In Charlotte, he was on the Board of United Community Services and was the co-founder and served on the board of Crisis Assistance Ministry. He received the Martin Luther King Jr. award and the Order of the Hornet of Mecklenburg County. In Atlanta, he served on the board of Global Health Action and the University Center of Georgia.

Oldenburg’s leadership at Columbia Seminary was key to advancing the seminary from regional to national prominence. He recruited extraordinary faculty and built an exemplary board. His unique contribution was to the wider world of theological education. In a day when the emphasis in presidency was championing one’s own institution and gaining competitive advantage, Oldenburg insisted that the whole was as important as the parts and that the Gospel concept of losing one’s life in order to save it applies to institutions as well as people.

As moderator he also sought to support and pursue the study of the Bible. He called for every congregation and presbytery to engage in a program of study about what Presbyterians believe about the Bible and how they read the Bible because he believed “how we read and interpret the Bible is a crucial issue for the church.”